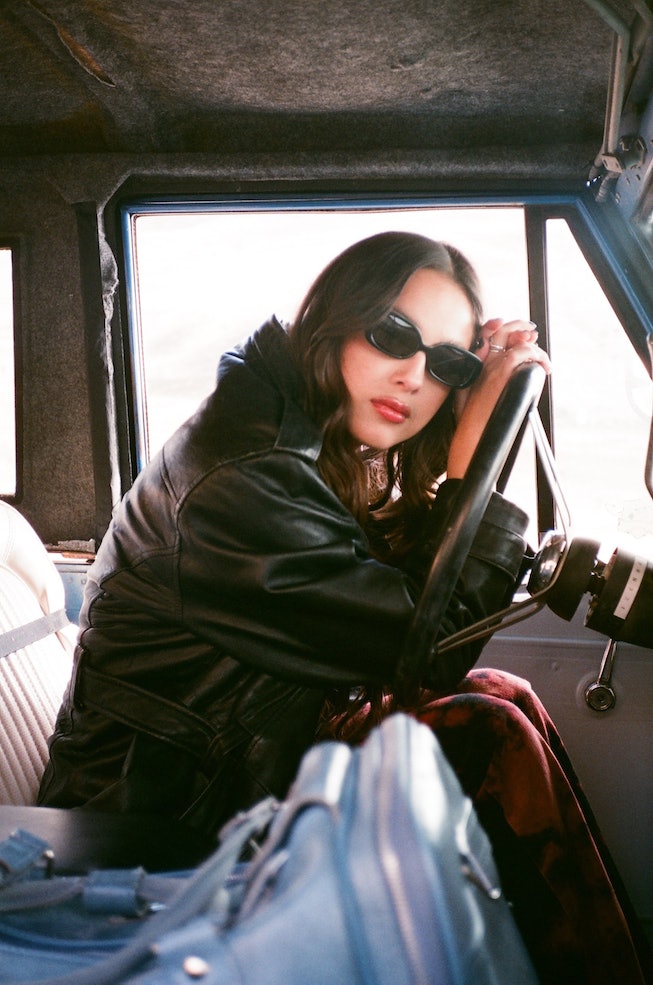 Sour was undoubtedly one of the biggest albums to drop in 2021, and the making of the influential record has now been illuminated with the arrival of Olivia Rodrigo’s new film, Driving Home 2 U.

The intimate, hour-and-a-half long visual, out now on Disney+, follows Rodrigo as she embarks on a road trip from Salt Lake City to Los Angeles — the two cities in which she wrote the majority of the record-breaking album. During her journey, she recounts the making of each song, from “drivers license” to “hope that you’re ok,” while sharing tidbits, facts, memories, and exclusive behind-the-scenes video footage and audio clips to create a dynamic, revelatory video diary. It includes some of the most vulnerable moments we’ve seen from Rodrigo (as she expresses doubts about herself and the record), as well as some of the most powerful, as she reinterprets each song in new live performances.

Most of all, her commentary provides new insight into one of the most mythologized albums of the last year, adding dimension and backstory to the much-beloved record. Below, NYLON summed up the six biggest revelations we learned from the behind-the-scenes look at the making of Sour, from key lyric changes, to an unreleased song, and Rodrigo’s insecurities about some of the tracks. Read on below, and be sure to check out the full film streaming on Disney+ now.

Before Olivia Rodrigo stunned the world with “drivers license,” she quietly uploaded an early version of “happier” online which, in her own words in the film, “changed everything for [her].” Through the upload, she met Dan Nigro, the songwriter and producer who would end up producing all of Sour with Rodrigo.

“He found it and he was like, ‘Oh my god, I love this song. We should work together.’ That was the first song we produced together, ‘happier’,” she said. The rest, as they say, is history.

Throughout Driving Home 2 U, Rodrigo speaks candidly about the devastating breakup that fueled Sour, more or less confirming that it was indeed about her High School Musical: The Musical: The Show’s co-star Joshua Bassett. About nine minutes into the film, Rodrigo calls the relationship and breakup the “heartbreak that kept on giving,” describing the situation as one where she couldn’t escape seeing him every day.

“I was in this situation where I had to see him... he was with someone else which was devastating to me,” she said, undoubtedly because they were filming together. “It felt like my world was ending every single day.” Sure, she doesn’t say Bassett’s name directly in the film, but who else could it be?

For all the fan attention and mythologizing that went into dissecting who exactly Rodrigo was talking about when she references the “blonde girl” in “Drivers License,” it turns out that that key lyric was different in the song’s earliest version.

In a video showing the very first recording of “drivers license,” Rodrigo sings into the camera while playing on the piano, “You’re probably with that brunette girl, the one I always thought about/ She’s so much older than me, she’s everything I’m insecure about.”

The film nor Rodrigo never addresses the lyric change, but this realization still throws a bit of a wrench into the furious online sleuthing that occurred after the song’s release, as well as the automatic assumption that everything on the album is 100 percent autobiographical. Why did Rodrigo ultimately change it, and which version is the truer one? We guess that’s ultimately only for the artist to know.

“Brutal” was a last-minute addition to Sour

One of the film’s most illuminating glances into Rodrigo’s songwriting process is when it explores the making of “brutal,” which was incepted at the album’s eleventh hour. In the film, five days before the Sour tracklist is meant to be delivered, Rodrigo tells her record label that she wants one more upbeat song for the album.

In the following scenes, you witness Nigro and Rodrigo essentially creating “brutal,” from what seems to be thin air. It begins with the track’s signature grungy guitar riff, which Nigro begins playing on his guitar out of the blue. As he records the riff to the computer, so as not to forget it, Rodrigo starts singing and ad-libbing along, before thinking up the lyric that would tie the song together. “What if the verses are like, ‘People are mean, the world is cruel,’ and then the hook, the thing is like, ‘God, it’s brutal out here,’” she says. A day later, they record the song’s first take, which ends up sounding nearly identical to its final version. It’s a fascinating look not only into the lifespan of a song — from the birth of its idea to its creation — but also the inner workings of Rodrigo’s mind.

Sour is now hailed as one of 2021’s best albums, but throughout the film, Rodrigo expresses a lot of doubt and second-guessing when it comes to the record. There are several scenes of her talking with her team about feeling unsure about or hating certain songs. In one, while recording “enough for you,” she tells Nigro immediately, while groaning, “It’s just like every other song on the record, just different words.” In a following conversation involving her record label’s A&R team, she elaborates, “I just wish some of the bits were more emotional. I feel like if you weren’t closely paying attention to the lyrics you wouldn’t understand what was going on” — to which they reassure her that she’s “overthinking it like crazy.”

Rodrigo later explains in the film that her overcritical mindset stems from growing up as a child star, where “you’re constantly told everything you do is amazing.” She quickly grew disillusioned to the feedback, instead deciding that everything she did could be improved upon. “I kind of went to the other side of the spectrum and started thinking everything I did was really bad. And started being my own critic like, ‘No, you can always do better. Always do better.’”

No doubt the stakes were pushed even higher following the immense success of “drivers license” and the feeling of needing to top herself at every turn. These intimate moments not only reveal the immense pressure she faced from outsiders (and most of all, herself), but also paint a complicated portrait of what it’s really like achieving success at a young age, and the dark holes one could find themselves getting lost in.

An unreleased song from Sour ends the film

There were several songs that didn’t make the final cut of Sour, and one of them closes out Driving Home 2 U. Over Super 8 footage from the making of the film, the acoustic tune plays in the background while Rodrigo sings about being unable to move on from the relationship: “But when I say I’m fine, I’m lying really well/ Cause I can’t love anyone else/ And I’m so jealous that you can/ Scared I’ll never feel that again/ Cause I still can’t call anyone baby/ Because baby is still you to me/ Don’t you think I wanna move on too?/ But I can’t love anyone the way that I loved you.”

It’s another gut-wrenching confessional that would’ve fit perfectly alongside the rest of the tracklist. And who knows, perhaps a Sour B-sides could be in store for the future.