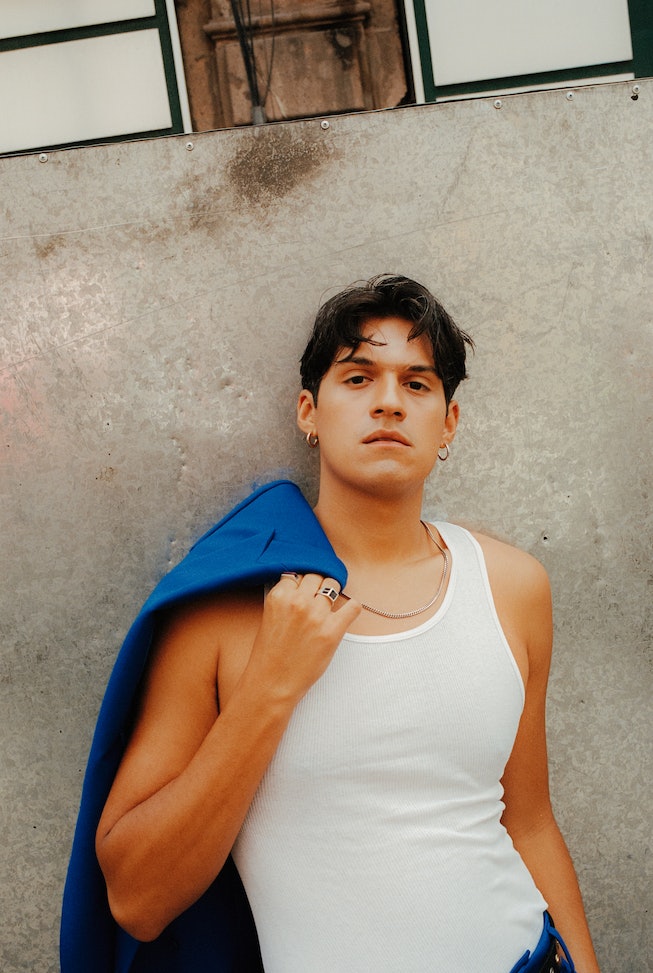 Omar Apollo saw you crying to his music on TikTok — but don’t worry, he thought it was cool. “I was like, ‘What can I do? I want to do something, what can I do to hop on the trend?’” he explained over the phone of his song “Evergreen” going viral on the app. “I grew up with the internet, making videos on YouTube [and] on Vine, so it felt like that.”

For the uninitiated, “Evergreen,” which is from the Mexican-American singer’s sophomore album Ivory, is about an ex who left him for someone else. Though the track was released back in April, it became Apollo’s biggest hit after a TikToker posted a clip of themselves lip-syncing along to it. In the video, they pretend to belt the bridge, “You know you really made me hate myself / Had to stop before I break myself / Should’ve broke it off to date myself / You didn’t deserve me at all.”

Viewers deeply resonated with the song and turned it into a trend, making TikTok a pseudo-graveyard for broken relationships. What started as angry lip-syncing evolved into crying montages and self-love videos, when people began posting glimmering photos of themselves to coincide with the last lyric — as if to say, “that chapter is closed and I’m moving on.”

As it turns out, Apollo is on to bigger and better things too. The 25-year-old singer just released the deluxe version of Ivory, is preparing for his next tour and recently partnered with Buchanan’s Whisky for their 200% Futuro campaign which supports Hispanic businesses and non-profits.

Before heading to a music rehearsal, he chatted with NYLON about working with Buchanan’s Whisky, preparing for his live shows, and witnessing fans connect with his music online:

Why have you partnered with Buchanan’s Scotch Whisky?

I only like to partner with brands that feel authentic to me, my family, [and] my friends, throughout my life. It's a brand that I've already connected with, and I really love that they're supporting Latino culture and Hispanic-American voices and businesses.

Had you tried their whiskey beforehand?

Yeah, yeah, yeah. Anytime I drink whiskey it's definitely Buchanan’s, for sure.

What is your favorite whiskey-based cocktail?

I like my cocktails to be a little sweet. I'll put pineapple or coconut water or whatever.

Coconut water? Just with the whiskey mixed in?

What businesses are you supporting through the 200% Futuro Campaign and why are they important to you?

I went to Chicago to support these Latino-owned businesses — like The Plant Shop in Chicago and Taco Sublime — and got to talk to the owners and the founders about how they started their businesses, and how they help out their local community. The Buchanan’s Futuro campaign also includes a 200% Futuro Fund; it is basically a fund that Buchanan’s made. It's a million-dollar fund, and over the course of five years, they donate to non-profits everywhere and support them.

Cool! I know It's been a really big year for you, especially on TikTok where fans have discovered “Evergreen.” What has been the biggest challenge for you now that your audience has grown?

Oh, there haven't been any challenges.

The part that's new is definitely the fact that a song is taking off, and all that’s happened around that, and just the mindset and how everyone's energy changes and shifts. Everyone's texting me updates and things like that, which is exciting to me.

Do you remember when you found out that “Evergreen” had blown up on TikTok?

Yeah, I was in the airport and there was this kid who made the first TikTok of it that everyone ended up using. My friend was scrolling his TikTok and he just showed me and was like, “Oh, damn, that's crazy.” And then I hopped on a 13-hour flight and then I landed. I made it home. It was just really crazy. It was like, “What can I do? I want to do something. What can I do to hop on the trend?” It was honestly fun. I grew up with the internet, making videos on YouTube, [and] on Vine, so it felt like that.

Definitely, it was cool to watch though because “Evergreen” is such a sad song —

Yeah, it is. But it's cool to see everyone have that universal experience.

Yeah, I saw everybody's crying TikToks and I was like, “Wow.” I wasn't even really sad when I wrote it, I was just focused. I don't know. When you're a writer you have to resurface things, and it's cool to look at it when you're not in it.

How does the deluxe version of Ivory compare to the original? What's new?

When I sequenced the album, I had these other songs that I loved, but I was like, “They just don't fit.” They kind of changed the energy. I feel like the only place they could live would be in a deluxe packaging. But yeah, it's kind of all over the place. There's some Reggaeton thrown in there and then there's some very sad guitar music.

What excites you about going on tour and being back on the road?

Well, honestly, right now I'm at rehearsal and I have all my gear here. We're just adding things to the live show, trying to fill it out a little bit, which is something I've never really done. It’s always just me and my band, and that was it. In my head, I really wanted to paint a picture and I've been working on [the] stage design for four or five months for this tour. Everything's coming together and everyone's really excited.

It's cool to come to work and everyone is just trying to benefit in some way, and everyone's learning from each other and things like that. It's a cool environment, like at the office.

Have you learned anything new through the process of putting the tour together?

Yeah, so much, so much. I would say that my strength is writing music, being in the studio, and recording. But when you think of things in a live way, that's a whole other skill that I had to build.

This article was originally published on Oct. 24, 2022