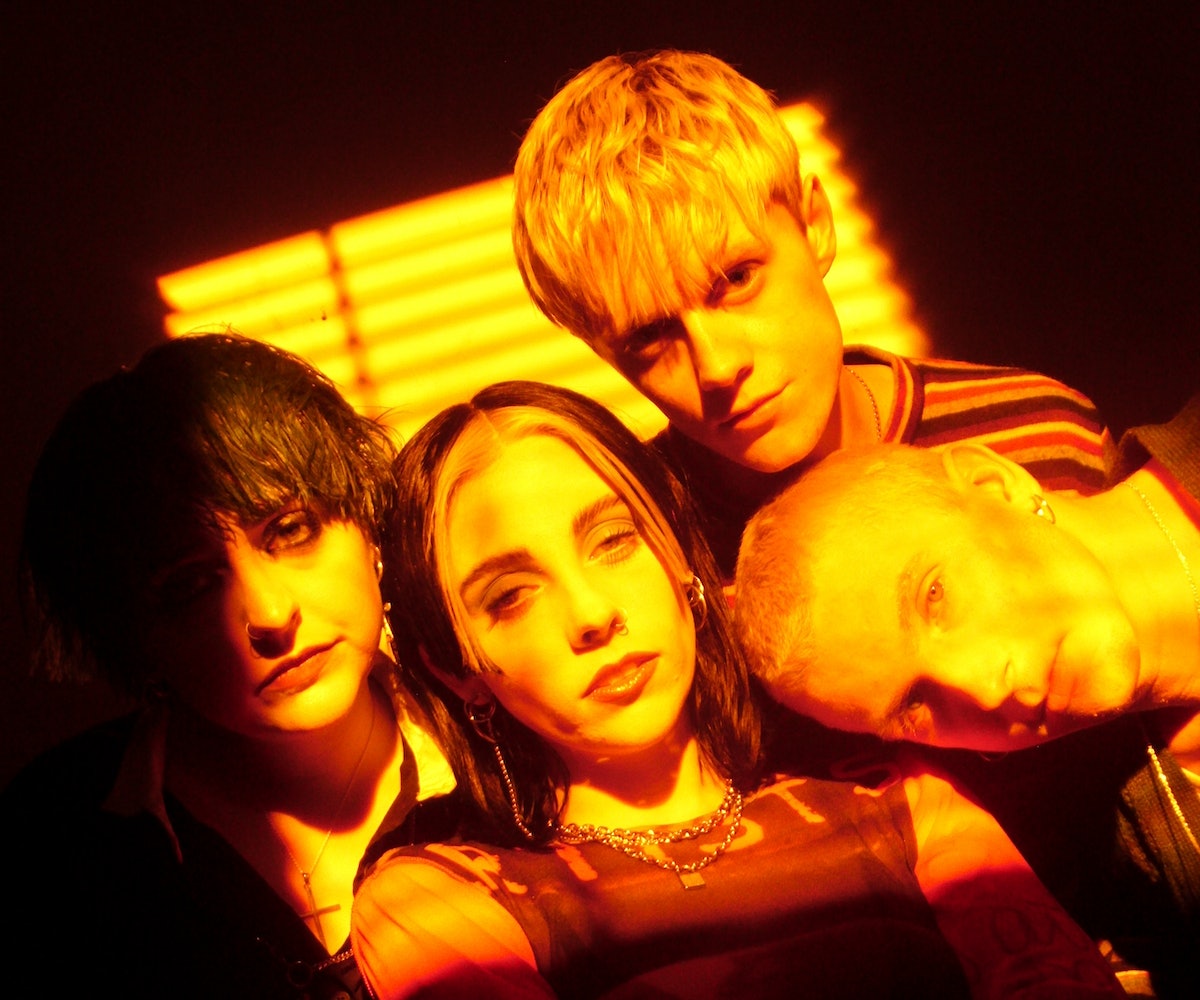 Pale Waves’ latest magazine cover story has just gone live, and frontwoman Heather Baron-Gracie is trying not to feel too nervous. The NME article, an up-close-and-personal recount about the making of the London-based pop group’s new album Who Am I?, reveals a tumultuous backstory involving a near-fatal car accident, rocky inter-band drama, and Baron-Gracie’s own queer awakening. “It’s like, ‘Oh God, did I really let down my walls completely?’” she groans, speaking of the piece. “But I guess that’s just what an artist is, and what is a requirement of being an artist.”

The two-year-long road to Who Am I?, out early next year, has been a tough one, but Baron-Gracie is determined to make some silver linings out of it all yet. Pale Waves' 2018 debut album attracted a loyal cult following for the band, thanks to their distinct flair for pairing high-fidelity pop exuberance with obsidian gothic aesthetics. Now, Baron-Gracie’s hoping to bring them along as she reveals more of Pale Waves, and herself, than ever before. “On the first album, I didn't let people into my personal life,” she says. “On this second album I'm really trying to, but it's definitely a huge change for me.”

The recent first single from the album, incidentally titled “Change,” motions toward that theme of vulnerability and growth as a demand for more of it; “I keep wishing you would change, change,” she sings over crashing Avril Lavigne-levels of grunge-pop cathartic release — a sound that saturates the rest of the record and is sure to blissfully prick any nostalgic millennial’s ear.

Calling from her home in London, Baron-Gracie explains why she made the decision to open up now, her desire to be more of a role model for her fans, and the annoying misconceptions outsiders still have about Pale Waves as a heavy metal-passing band making pop music.

You're making a very concerted effort to try and open up. What prompts you to want to do that? Because the NME article was quite intimate. You share a lot of details about your life and...

Yeah, my family and stuff… I guess the reason why I wanted to consciously try and open up more this time around is because I sort of wanted to be even more of a role model to my fans and to give them comfort in them feeling out of place, and their insecurities. How can I preach about, "It's okay to feel different and be different," when I'm not being truthful and I'm still closed off? And I'm trying to hide that from the world, but it's just not a very natural thing to be on display to everyone so, I'm just getting used to it.

Does that come from feeling maybe you didn't have someone to look up to when you were growing up that you would have really liked?

Yeah. I think if I discovered Courtney Love a lot earlier... I discovered Avril Lavigne and she was a massive influence to me, she still is. With Courtney Love, she's just so unapologetic and she's so free and that's what I really admire about her. And she just doesn't give a shit about anything or anyone. She says what she says and then she just doesn't care really because that's who she is. So, I feel like I've really benefited from a powerful woman like her to aspire to be like.

The making of this new record was different from that of the debut. You and bandmate Ciára Doran were the main songwriting duo but you guys invited new writers into the project this go around. What do you think was missing in those first songs?

Well, I think the first batch of demos we were trying to be too much like first album. And it just wasn't sitting right for me. I was done with the sort of '80s influenced pop style, it's not entirely me. That was the combination between myself and Ciara and we both needed space artistically to create separately. We sort of overworked one another and we were exhausted and we just kept writing the same songs. So it got to the point where we both knew that we needed to take time apart from one another. I went off and I think I only wrote with maybe four people, and 50 percent of the album or more was done with the same guy, Sam de Jong, because we just hit it off so well. He's really amazing at so many instruments and we just got along so well. And that was really freeing for me because I didn't have to sort of consider someone else's artistic vision.

And Ciara, they went off and now they are producing loads of new artists and honing in on the craft and just becoming a better producer each day, which is amazing. So positives came from this and I hope one day we do write together again. But right then in that moment, it just wasn't going to happen.

How has the friendship changed since then? Do you feel there's a different dynamic?

As you [read] obviously, it was a tough pill to swallow with Ciara, but as the months went by our friendship sort of bloomed into something else and for the better. It feels like we both sort of matured and grew up, and it felt like at the start of creating we were a bit more immature and childlike. We’ve both really grown into who we want to be, and there's a lot more maturity around the situation. And if anything, I feel like our friendship is so much better and it's the strongest position that it has ever been really.

The 1975 have been described as your mentors, were you able to lean on them when you guys were working on this album?

No, The 1975 haven't had any involvement in this album at all. And I've only texted Matty a few times and our conversation has just been, "Hey, how are you?" It's literally been like zero involvement. They're busy doing their own thing.

So this is very the essence of Pale Waves is what we're seeing in this next round.

Oh yeah. This is truly me on this album. I feel very proud of it because it's a world that I've created and the majority of it I did alone.

What song are you most proud of?

I'm very proud of a track called “She is My Religion,” because it sounds completely different to anything we've ever put out there before. And it's a song that embraces sexuality and I think it's going to be a song that really comforts a lot of my gay fans, because I know there's a lot of them that are young and gay and they're struggling to come to terms with it, and they struggling because their parents are not very accepting; I receive DMs every day of the same situation. So I'm just really excited to put that out there because it's going to make them feel less alone and make them feel like then they shouldn't be ashamed of sexuality.

Do you feel that there's still misconceptions about you or the band out there that hopefully this record will set straight?

I think one of the biggest misconceptions is that we're not a heavy metal band. People really struggle with the fact that I like to wear dark makeup and have black-dyed hair. I guess, stereotypes for people, you find it really difficult to let go of them. And it actually offends some people and it's so hilarious. On the first album, we received so much shit for basically... for wearing eye shadow and then playing essentially like pop music. Just like, wow.

The people that are criticizing me and trying to put me into a box or the people trying to speak about how it's awful... Why's people in those boxes? It's like, "Open your eyes." I don't have to wear anything to play the kind of music that I want to play. It's crazy how much... how many people struggled with how I looked because I wore a black lipstick and sang a pop melody.

Are you hoping maybe the aesthetics of this cycle is a bit lighter, not-Goth?

Yeah. I really want to make a conscious decision to broaden the aesthetic and push myself and the boundaries that I gave myself to feel comfortable. I really wanted to do something different this time around [but] obviously like the core of me will always have that darker element. So I think it's going to be a combination, whereas last time it was heavily dependent on the dark side. I feel like this time, I'm sort of trying to push it in the middle, just for fun and to keep things exciting. I don't want to do the same thing again.