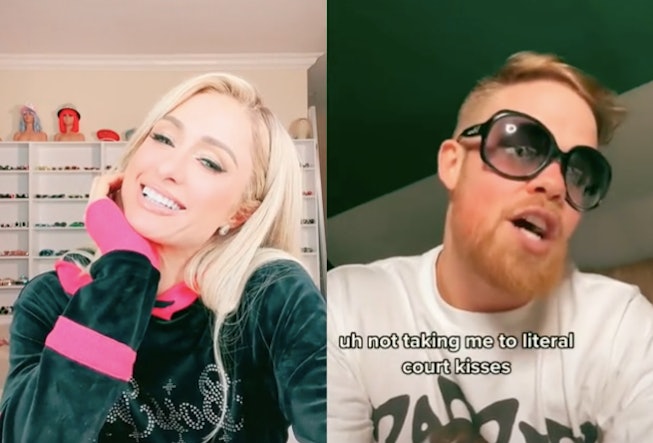 TikTok’s “One Thing About Me” challenge officially has a winner, and it's Greg Brown. The AsapScience influencer used the trend to confess how he stole a pair of sunglasses from Paris Hilton nearly 15 years ago — and now, he and the hotel heiress are internet besties.

“One thing about me is that I once robbed Paris Hilton and I hope she never sees this cause I could go to jail,” Brown said to the tune of Nicki Minaj’s “Super Freaky Girl.” “It was 2007,” he explained. “I was at an MIA concert, the musician. It was great, I was drinking. I left the concert and then a big, black car pulled up and all these people screamed and Paris Hilton got out.”

According to Brown, he and his friends broke into Hilton’s car after she went inside a club. Hilton was in Toronto at the time to film the 2005 thriller, House Of Wax. “There was no one in the car, so we just got in the car,” he said. “We were laughing, we were screaming, we were in Paris Hilton's car. Then my friend said ‘run’ and I thought the cops were coming so we ran.” After they escaped Brown's friend revealed that she snagged the socialite’s Christian Dior sunglasses. Since then, they have been sharing them like Sisterhood Of The Traveling Pants.

Brown's video went viral and made its way to Hilton, who commented “LOL Can you please do a reveal of the sisterhood of the traveling Paris Hilton sunglasses.” Brown happily obliged and filmed another TikTok wearing the infamous sunnies. “Paris! Me so sorry. Me so sorry for robbing you,” he said. “These are them, you asked for a sunglasses reveal.”

“You want to join the sisterhood of the traveling sunglasses? I will happily give them back to you as long as you give them back to me,” he joked. Hilton dueted the video and laughed along as he said, “They are yours. I did break into your car and steal them from you. Again, I’m so sorry, I was a wild child. Thank you for being such a good spot. I don’t know if you want these back. Fashionably, like, is this back? You tell me, fashion icon.” Before ending the video, Brown said he would wear her glasses that weekend, “in honor of you not taking me to literal court.”

Thankfully for Brown, Hilton thought the situation was funny. When she dueted his confession, she wrote, “Omg I remember these sunglasses. They look so hot on you so you can keep them. PS: They NEVER went out of style.”

NEXT UP
Culture
Paris Hilton’s Memoir Will Included Her “Most Personal Stories Yet”
Culture
An Exhaustive Breakdown Of The Balenciaga Controversy
Entertainment
Taylor Swift Swept The 2022 American Music Awards
The Art Issue 2022
True Life: My Partner Is Obsessed With NFTs