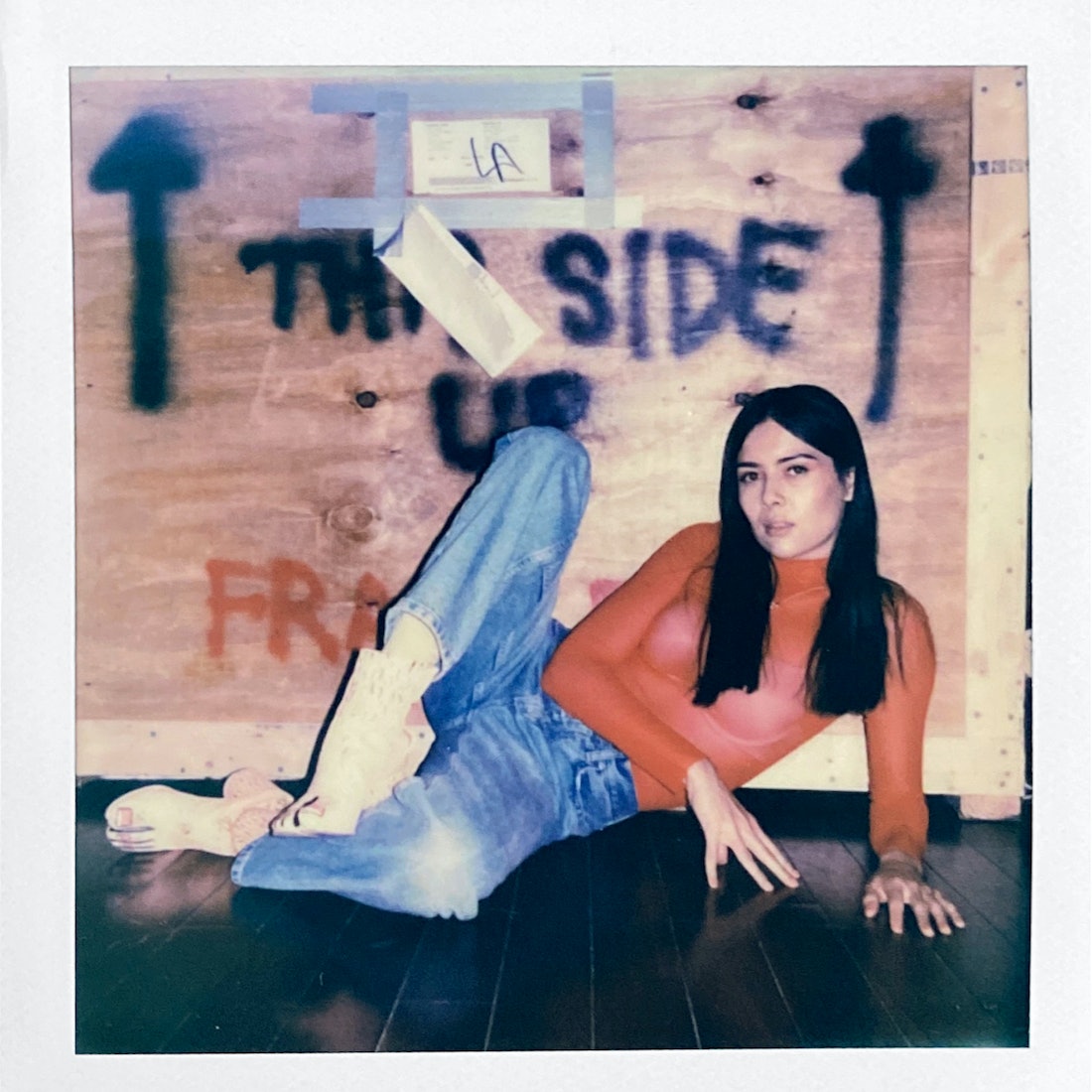 The comedian is never at a loss for words, especially when it comes to herself.

Is Patti Harrison mad at me, or is she joking? It’s a question you might ask yourself when watching her standup, or reading her Twitter account, or in this particular case, when bringing up a sensitive subject mid-interview. The question at hand: Given what we now know, does the comedian and actor regret publicly lobbying for a role in Tom Hooper’s live-action adaptation of Cats?

“Yeah, it’s my biggest regret,” she says, deadpan. “And it’s so f*cking weird and, frankly, b*tchy of you to ask me.”

After a brief pause, her stone-face delves into bemusement, and her voice softens as she veers into a tangent about the nature of artistic catastrophe. “It is astounding how they made every wrong choice and also things went wrong. They made bad choices already, and then things still got f*cked up out of their control. This is a tainted movie. It is proof of evil and the devil.” Though, she continues, she enjoyed the Broadway version, its commitment to the bit. “I really ironically loved it so much, but I think I actually do love it, and I haven’t been able to admit that. I get the songs stuck in my head all the time. It’s really depressing.”

Harrison has a tendency to these kinds of soliloquies, which meander between irony and sincerity, and often build to an absurd climax. No, Patti Harrison isn’t mad at me — she just revels in the uncomfortable. Talking over Zoom from her bedroom, she holds forth on subjects ranging from the climate of her new home city of Los Angeles to a hypothetical, award-winning film at the non-hypothetical Hamptons International Film Festival. “There is a very slow zoom from far away for 20 minutes that gets gradually closer and closer to a little spinning kind of a rotating platform that has a lobster roll with a ton of mayo and steak fries. I think people would just stand up and start weeping.”

Harrison, 29, began taking improv classes in college before coming out as transgender towards the end of her four years and dropping out to move back home to Ohio. In 2015, she moved to New York to pursue comedy full time, and has since amassed quite the resume, most notably her role as the snide, potentially sociopathic office assistant Ruthie on Hulu’s Shrill, a part that was written by co-creators Lindy West and Aidy Bryant with Harrison in mind. Like Harrison, the character Ruthie is trans, but that is where the similarities end. For one, Harrison thinks Ruthie might be a serial killer. “She's got to be,” she says. “I would love to do a scene where they pull open her drawer and there's just a ton of dead rats and birds. She's been killing small things with the growing urge to kill more.” A small but memorable part in 2018’s A Simple Favor marked her first big-budget film (“I felt very tiny and in the way, but I flew on a private jet with Blake Lively and her family,” she says). Up next, she’ll co-star with Ed Helms in the comedy film Togetherish, which is in post-production.

While she enjoys acting in addition to her stand-up work, she struggles with the “Hollywood” of it all. “I've thought about my relationship to my body, my body dysmorphia, and what that means as someone who's like, ‘Oh, I'm going to be on camera,’” she reveals. “Sometimes it makes my body dysmorphia worse, but I've also tried to not let my mental illness rob the joy of getting to do something I've always wanted to do. But it's just hard because, especially with women now, everything is still so look-oriented … I shot this thing with this writer and director Todd Rohal where I was playing a demonic serial killer. My face was covered in dirt and I was not wearing makeup and they had me in this crazy wig and it was such a relief because I wasn't worried about like, ‘Do I look pretty?’”

Harrison has been thinking about her mental health even more now, while quarantined at her home in LA. She recently decided to take a break from Instagram, finding herself compulsively checking the app and comparing herself to others. “I was already on Instagram too much, and then it became my world and then I was like, ‘Oh, at the end of the day, [Instagram] is a device that is like a vehicle for advertising.’ And advertising structurally is built on designing flaws in your brain, like making up these flaws that you don't have so that it can sell you stuff,” she says. “I just have stopped using social media or Twitter and Instagram basically. But I check my DMs because someone was going to send me nail polish, which I was like, ‘Rock on.’”

As such, don’t expect to get a ‘Patti Harrison is going live’ notification anytime soon. “Instagram live just feels so different to me because I don't want to do a show where I'm doing a set and you don't hear people laughing,” she says. “I think some people really thrive in it. And so many people are on Instagram that it is instantly accessible for people to make more stuff. So if other people like watching Instagram lives as a source of comedy, then it's great.” Her brand of comedy also happens to thrive in a live setting, where she can perform as an exaggerated version of herself where you never know what she’ll say next. “A lot of what I think is funny is usually through some sort of character, or speaking earnestly one second and then saying something obviously joking,” she says. “I mean, there are things that I've experienced that I don't joke about because I'm just like, ‘People don't really think it's funny that I had an eating disorder for a long time.’ There are some things that just like really bum people out. Maybe that'll change and I'll write the bulimia comedy of the summer.”

Harrison’s quarantine lifestyle is typical of the new normal. She’s maintained her writing jobs from home, she’s experimenting with podcasting, she’s watching rom-coms with her roommate, and she’s been on FaceTime dates. She is on a few dating apps, including Raya, of which she says: “Raya's a nightmare. But if you want to find psychopath Vice bros where it's like, ‘Yo, I'm an assistant digital editor at Vice and I love Bjork and I hate trans people, but I would love to take you on a coffee date and pick your brain about me stepping on you to get all your industry connections…’”

Her plans for Pride remain TBD. “It seems like there's the nightclub Zoom dance events that are really popular,” she notes. Earlier that day, Entertainment Weekly released its Pride cover, which features caricatures of LGBTQ figures including Elton John, Kristen Stewart, and Ellen Degeneres, among others, and was promptly mocked on Twitter. Harrison is distracted as she pulls up the image on her phone at the mention of it. “There’s part of me that really feels for [Ellen] as someone who has to be a smiley, nice, positive person who's keeping everyone's hopes up and really kind of being an inviting figure to people who might not agree with gay marriage,” Harrison says. “It's like, ‘Oh, she's a pleasant, nice, palpable entry point for the conversation for a more conservative person to see this really, happy, white, nice lesbian who's really funny… But then the George Bush stuff, I was like, ‘You f*cking dumb piece of sh*t, what is going on there?’ You've got to have friends that have different opinions than you, [but] it's like... you f*cking started a war.”

Before logging off of Zoom, the topic of birthdays comes up. In October, Harrison will turn 30 and, prior to the pandemic, she “was tied to the idea that this was the last year of my 20s.” “I was too poor to travel growing up, and this was going to be the year that I traveled and now I can't travel,” she says. “I never got to run topless in just my thong on a beach in Italy when I was 21 and get to blame it on being 21. I can't be a 30-year-old woman in a thong on a beach and topless in Italy, screaming at a cop.”

Or can she? “The women that I worship all hit their stride in their 30s or 40s or after,” she says. “And that's going to be for me, too. Age is so arbitrary. It’s just being quarantined that I have the time to be like, ‘Well, I never got to play a sexy teenager on a CW show and I never will.’ But I want to be full 50, dropping my books and pulling my saxophone out of my locker.” The fantasy evolves from there. “I am really hot, I just play sax. I have really thick bifocal glasses, but I am in a thong. I'm wearing a Supreme thong. That's how you know I'm a kid.”

Photos courtesy of Patti Harrison for NYLON. Special thank you to Polaroid.

NEXT UP
Culture
Kaia Gerber Won’t Stop Until She’s Cast As Patti Smith In A Biopic
culture
Anna Delvey Is Getting A Reality TV Show
Culture
6 Shows To Binge Once You've Finished 'The White Lotus'
Culture
Succession Season 4 Trailer Explodes With Family Drama
Style + Culture, delivered straight to your inbox.