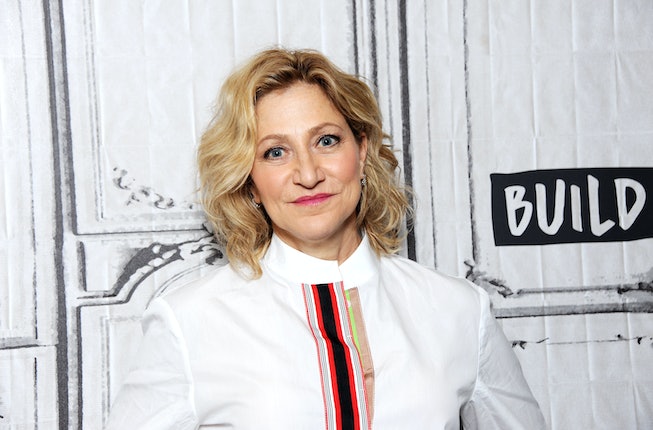 Edie Falco is returning to comedy, with plans to star as Pete Davidson’s mom in the forthcoming Bupkis for Peacock. The series, produced by SNL head Lorne Michaels, will be a fictionalized version of Davidson’s life.

The Emmy-winning Falco most recently starred in the title role on Nurse Jackie, about a nurse with a prescription drug problem. Mostly famously she portrayed Carmela Soprano on The Sopranos opposite the late James Gandolfini, for which she became the first actress to win Emmys for both comedy and drama.

Pete Davidson has a new project in the works. The SNL comedian and stand-up performer is expanding his burgeoning acting career with a new series based on his own life. Tentatively titled Bupkis, the series has been compared to Larry David's Curb Your Enthusiasm but with an “R-rated” twist.

According to Deadline, Bupkis is described as a “raw, unflinching, fictionalized version of Pete Davidson’s real life.” The show is expected to include a combination of “grounded storytelling” along with “absurd elements,” to provide viewers with a glimpse of life through the young-comedian's eyes.

The upcoming series is in its’ planning stage, and details are limited. We do know, however, that Davidson is starring in the show and is helping write the script. Davidson’s friends and creative collaborators Dave Sirus and Judah Miller are assisting with the script as well.

Bupkis is the comedian's latest venture outside of his eight-season stint on SNL. Davidson has recently flexed his acting skills in The King of Staten Island, The Suicide Squad, Big Time Adolescence, Set it Up, and Brooklyn 99. The 28-year-old comedian rose to fame after appearing as a series regular on MTV’s Guy Code, and has been in the public eye ever since.

When he’s not being recognized for his film or television accomplishments, Davidson’s dating life takes center stage. He is currently romantically linked to Kim Kardashian, and might be featured in the reality star’s new show on Hulu. In an interview with Variety, Kardashian revealed that she has not filmed with her boyfriend yet, but she does plan to discuss their relationship on the new docuseries.

“I have not filmed with him, and I’m not opposed to it. It’s just not what he does,” she said. “But if there was an event happening and he was there, he wouldn’t tell the cameras to get away. I think I might film something really exciting coming up, but it wouldn’t be for this season.”

Though Davidson’s direct involvement in the Kardashian reboot is not confirmed, we can expect to see him in other projects very soon. Deadline reports that Davidson is currently on leave from SNL and will appear in the film Bodies, Bodies, Bodies which premiers at South by Southwest, along with Machine Gun Kelly and Megan Fox’s new project Good Morning, and the film Meet Cute with Kaley Cuoco.

Stay tuned for updates on Bupkis as the project is currently in early development.

NEXT UP
Entertainment
Issa Rae's 'Rap Sh!t' Trailer Starts A "Bad B*tch Renaissance"
Entertainment
Megan Stalter To Create 'Church Girls' Comedy For A24 & HBO Max
Entertainment
Shea Couleé Hints At Exciting Things to Come In the Second Half of ‘All Stars 7’
Entertainment
Everything Coming To Netflix In July 2022