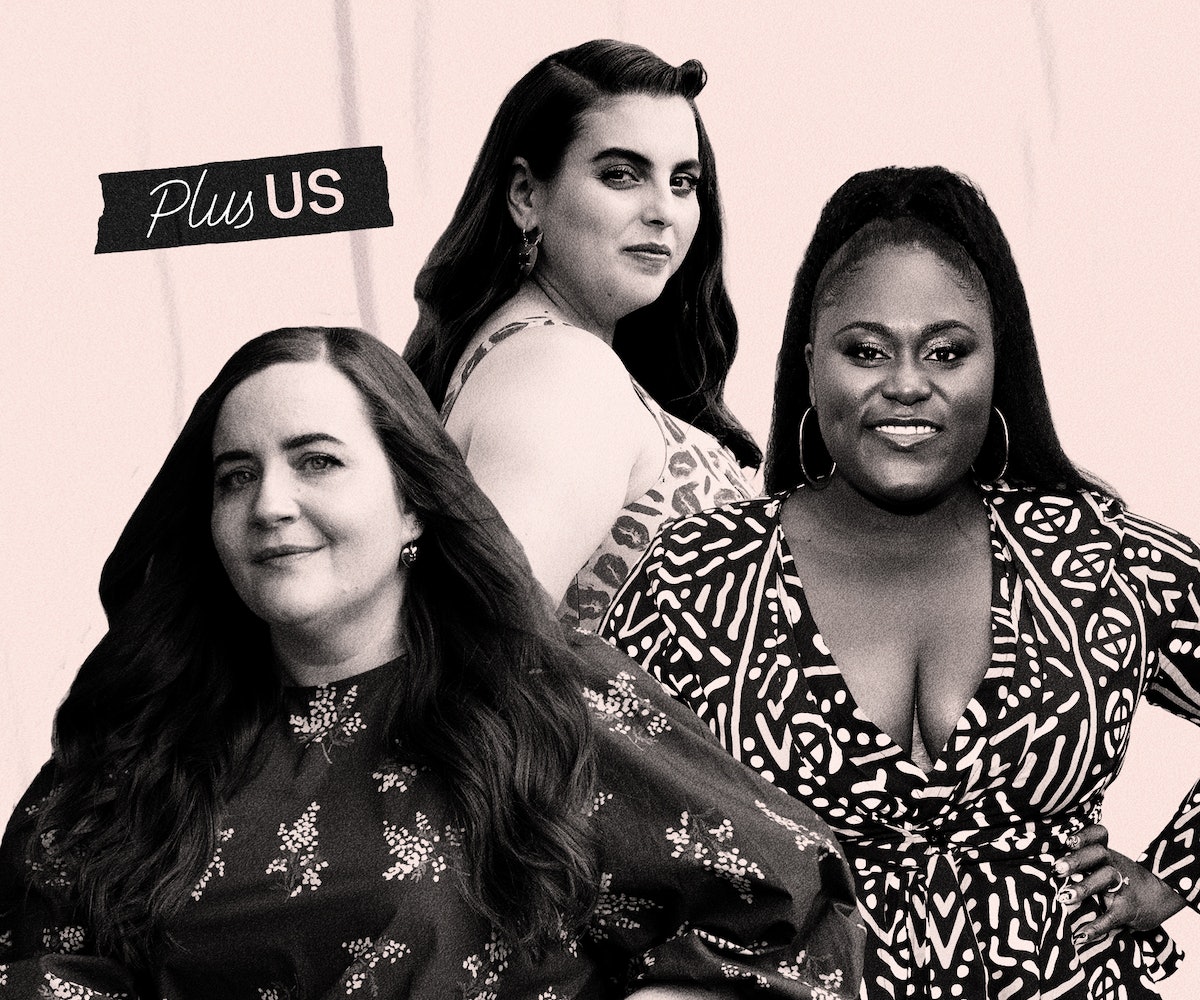 Hollywood has never been fully welcoming of plus-size folk — not until we found a back door in. For decades, plus-size representation in television and film was dominated by mediocre sitcoms. It’s a tragic trope of the ‘90s and 2000s: The uninspired fat man miraculously lands the hottest babe from high school, despite his many flaws, like in The King of Queens. Over the years, some curvy women have been sprinkled into the mix as well, though their plotlines follow a nearly identical trajectory: self-loathing, weight loss, sadness, and the need to “be better.” Think Rhonda from That '70s Show, Hanna from Pretty Little Liars, or Bridget in Bridget Jones' Diary.

Recently, however, that has begun to change at an exciting rate.

“The only reason that we're seeing shows like Shrill and Dietland happen is because fat people — specifically fat women — are writing the source material,” says actor Jen Ponton.

Danielle Macdonald, Shannon Purser, Aidy Bryant, Natasha Rothwell, Danielle Brooks — the list goes on and on. Whereas 30 years ago, Melissa McCarthy and Queen Latifah were among the only plus-size women challenging Hollywood’s beauty standards, a new generation of game-changers has stepped up to carry the torch, bringing with them a plethora of fresh stories that rewrite what society believes it means to be fat.

Hollywood is far from cured when it comes to anti-fat bias. There are issues that remain — like the lack of plus-size leads in romantic comedies, not showing a wide spectrum of bodies, and, of course, the fat suits, recently discussed by Sarah Paulson — and a level of normalized body diversity is still out of reach. The difference, however, is that while these problems were largely ignored in the past, the conversation now has room to flourish.

“I think the thing that surprised me the most coming from a theater background is how all these descriptions for characters you're auditioning for are all physically driven in film and TV,” says Jessica Miesel, who currently plays the role of Jessica Moore on The Resident. “As an actor, I thought that was so strange, because how does one act fat?”

Boxes can feel impossible to break free of, particularly when they’re built out of one’s identity and layers of marginalization.

Danielle Perez, a comedian, actor, and writer, adds, “Oftentimes I'm auditioning for a character that is written as plus-size, or Latina, or Black, or disabled, but I am so much more than the box that they try to put those people in. It feels like the only time that fat is written into a role is because that person is sad. They’re the fat funny friend, or they’re sad.”

Both Miesel and Perez have noticed, however, that recent years have brought about unique opportunities at an unprecedented rate, roles that don’t require weight-centered storylines or antiquated fat jokes to move the plot along. In the comedy space, Perez has particularly been inspired by plus-size, Black women like Nicole Byer, Michelle Buteau, Wanda Sykes, Moms Mabley, Ms. Pat, and Dulcé Sloan. “Stand up really empowers people who are different, who are outsiders, who are maybe not always considered — it gives us agency, and it gives us a place to be ourselves, and people respond to that.”

That change is a testament to the often unnoticed work flourishing behind the scenes. Hollywood as a whole may still be out of touch with the plus-size experience, but writers, producers, and creators finding their way into the industry are bringing value to the conversation and are finally being heard.

Take writer and director Claire Ayoub, for example, whose upcoming film Empire Waist made noise with its national casting call embracing diverse talent. With the support and backing of Wayfarer Studios, the movie — now in production — is an example of what can happen when a listening ear is granted.

More examples are popping up each day: Disney, for instance, has cast a wide array of body types in its recent offerings, from High School Musical: The Musical: The Series to Diary of a Future President (where Perez held a cameo on Season 2). HBO’s recent hit The White Lotus did similar, as did Nine Perfect Strangers, You, Empire, and Netflix’s Special, among other programs. Take a close look beyond the stars: Even background characters today are more reflective of the world at large.

“Diversity of thought is important,” Perez says. “Having people from different backgrounds who have different perspectives, who have lived different lives, bringing all of that to the table fuels creativity. That gives you richer jokes, richer stories.”

She adds, “Comedy writing, or even just writing for television in general, is a creative process. Why wouldn't you want [to hire] people that add new dimensions to the process? Why would you want to just keep everything the same?”

Opening the door to more perspectives touches audiences just as much as it helps these very creators to finally feel seen, represented, and valued.

In 2016, Melanie Field was cast as Heather Chandler in the highly discussed Heathers television series. It was a momentous time: Not only was Field going to play the Queen Bee — a role typically reserved for the Rachel McAdams and Megan Foxes of the world — but her storyline was grounded in the concept of body positivity. In fact, while planning to lose weight before filming, Field was specially instructed otherwise.

“This anti-fatness of society and Hollywood was so embedded in my psyche at that point that I actually believed it was imperative for me to get as small as possible,” Field recalls. “But the producer and writer told me: ‘Don’t lose weight.’”

In the following months, Field immersed herself in the digital plus-size community flourishing on social media and quickly realized that body positivity was more than a “you look great” mantra. Rather, it was a force, one that would allow her to heal and help her understand the very stories that still needed to be told, stories she’d been writing internally since childhood.

That story culminated in “Now I Know,” a music video Field released this past May sharing some of the most difficult, soul-shattering experiences she’d faced as a plus-size woman, and how fat liberation and inclusive storytelling granted her permission to finally step into her power. Within 24 hours, the six-minute production went viral, and the comments section spoke for itself: These are the stories we’re waiting for; These are the stories that change lives.

To all of those interviewed, the future is simple: A time when plus-size characters can live without their weight mentioned; a day when their size has become so normalized, it warrants not even an ounce of dialogue.

“Ideally, in my mind, the plot has nothing to do with my body,” Ponton says. “The victory is in the fact that it's not notable, not remarkable that a fat person could be successful and wealthy and have a robust, romantic, whimsical life.”

Like fashion, like modeling, like the world at large, Hollywood has yet to elevate plus-size voices to the extent they deserve. But if these four women are any indication, a new wave of warriors will not let the momentum run out, because they know firsthand the power of turning on the television and feeling a sense of welcoming within the confines of one’s living room.

A lyric from Field’s “Now I Know” explains it best: “I hope someday a little fat girl will be watching TV, and while flipping through the channels, she’ll stop and see me. She’ll say, ‘Hey, Mommy! Look at her! Someday that could be me.’”