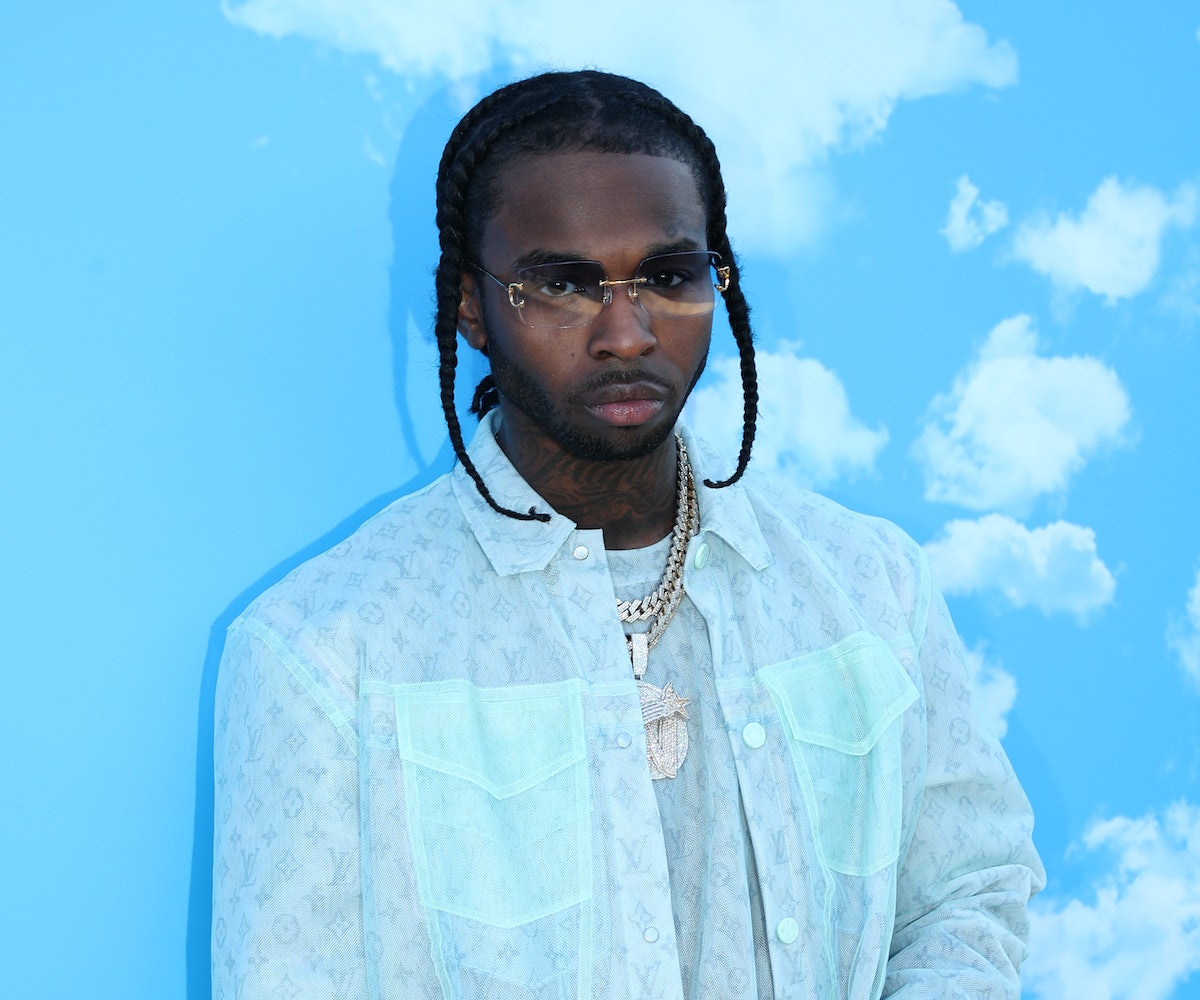 On the evening of May 30, protesters and police swarmed the streets of Flatbush, a predominantly Black American and West Indian enclave in Brooklyn. It marked one of the most fraught nights of conflict since the uprisings started taking place within the five boroughs. Hundreds of arrests and violent incidents were documented by phone between residents and the police; tear gas spilled in the streets. Late into the evening, after cops successfully kettled protesters between two streets, the atmosphere shifted. Violence escalated, and the gospel that had been blasting in the background changed into the sounds that resonated with the youth. Brooklyn drill hits “Welcome to the Party” and “Dior” filled the air as cop cars burned in the background.

Months after his untimely death — a still unresolved home invasion and murder in a California residence — Pop Smoke (aka Bashar Jackson) lives again. The music of Brooklyn’s beloved drill phenom filling the streets as young people united under their feelings of distress and unrest with a world they've been forced to accept.

News of Pop's death was a tragic loss that is still reverberating across New York City — especially the borough of Brooklyn. Streams of his music skyrocketed soon after his transition out of this world, and for weeks, one would be hard pressed to walk down Flatbush or Flatlands Avenue without hearing the song that broke him into the mainstream, “Welcome to the Party,” or his biggest single, “Dior.” On Flatlands Avenue and E 82nd Street, a mural was created in his honor, the first of three. It stood prominently in the background during the funeral procession, where it felt as if his entire hometown neighborhood of Canarsie spilled out into the streets to honor his life — a majestic display not seen in Kings County since the passing of legendary rapper Notorious B.I.G. As noted by culture critic Ivie Ani for The Fader, their musical trajectories echo one another: two young men of West Indian descent who became the pride of their respective Brooklyn enclaves, robbed of what had the promise of being magnificent careers.

It isn't altogether surprising that Pop Smoke’s discography has become a posthumous soundtrack of New York in this current moment of protests against police brutality, triggered by the police-inflicted deaths of Black lives such as George Floyd’s and Breonna Taylor’s. Pop’s life, and in turn his music, was highly affected by the trauma of police surveillance and violence and the conditions that those circumstances created, down to the Canarsie neighborhood where he grew up. (The neighborhood was recently shaken by its own viral incident: A young man named Fitzroy Gayle, the same age as Pop Smoke at his death, being violently arrested by eight police officers.)

A melancholy of Pop’s passing was that he never got to have the triumphant homecoming moment in the city that raised him, thanks to the ever-looming shadow of the NYPD. In October 2019, the “Boys in Blue” requested that he be removed from the lineup at Rolling Loud the day before the event in question “due to public safety concerns,” claiming his shows were affiliated with unnamed “recent acts of violence citywide.” Upon his return from Paris Fashion Week, Pop was arrested at John F. Kennedy Airport and charged with interstate transportation of a stolen vehicle mere hours before a scheduled performance at the Barclays Center honoring deceased A$AP Mob founder and collaborator A$AP Yams. (Those charges have since been dismissed.) The Sunday before his passing, Flatbush’s Kings Theater hosted Brooklyn’s first drill concert, BK Drip, with Pop Smoke featured on the bill. Eventgoers were still regrettably greeted with the message “due to unforeseen circumstances, Pop Smoke will not perform at tonight’s show” as they entered the venue, the space saturated by a heavy police and security presence throughout the largely successful evening.

Pop Smoke’s discography has always been a form of protest — defiant, transgressive, and transformative no matter the space in which it’s consumed. Drill wasn’t necessarily made for the club, but with his frequent partner 808Melo, Pop crafted melodies that existed on multiple levels — simultaneously euphoric and ominous, depending on the mood.

Songs like “PTSD,” “Scenario,” and “Better Have Your Gun” from his first project, Meet the Woo, all now hit different, transforming into a perfect encapsulation of the frenetic, rebellious energy now coursing through the veins of every New Yorker marching through its streets. Track after track, Pop litters acknowledgments to treasured friends who are still making their way through the prison industrial complex, using his distinctive gravelly inflection to depict the extent in which police interference has become accepted as part of their day-to-day life and interactions. On “Better Have Your Gun,” Pop references Tupac’s “All Eyez On Me”— the slain California rapper's first track after being released from prison — and East Flatbush rapper Shyne’s “Commission.” “What the f*ck is you telling me?” he warns. “I got the pedigree/In the hood, I'm fighting felonies.”

When “Dior,” a track about aspirational accomplishment, is juxtaposed with a burning cop car or a melee in Soho or a cascade of faces parading down Eastern Parkway, the coalescence of energy feels nearly elemental. Pop Smoke’s music threaded together the chaos, fury, trauma, hope, and joy in New Yorkers in a way that no one else had done in quite some time. That accomplishment alone is feat enough to unify a sea of now-burgeoning activists who are screaming to be heard in a system that continues to take Black lives for granted. Pop predicted as much on the JACKBOYS and Travis Scott collaboration “Gatti”: “You cannot say Pop and forget the smoke.”

Pop Smoke’s discography has always been a form of protest — defiant, transgressive, and transformative no matter the space in which it’s consumed.

Pop Smoke’s posthumous debut album, originally slated for June 12, has now been pushed back to July 3; Smoke’s estate shifted in lockstep with the rhythm in Brooklyn. As Steven Victor, CEO of record label Victor Victor Worldwide, explained, though they’ve “seen Pop’s music become the soundtrack of the moment, unifying the masses,” they've still “decided to delay the release of his album out of respect for the movement.”

Posthumous adoration inevitably invites speculation of what could have been and what was lost. In the case of Pop, a young man who repped his Panamanian heritage as much as he did his Canarsie hometown, New Yorkers waited for the homecoming track with fellow Brooklynite and Panamanian Bobby Shmurda — his own saga a reflection of the fundamentally broken injustice system. Shmurda is due to be released from prison at the end of the year, but their collaboration is now a reverie that has dissolved into the ether. Pop Smoke, however, still left behind a breadth of work, with rumors of existing collabs from his spiritual forebear 50 Cent, to the “African Giant” Burna Boy himself. A clip of him flipping a sample of Tamia’s “Into You” made the rounds not long after his death to great acclaim, yet another testament to his deceptive versatility across soundscapes. The announcement of his upcoming album allows for endless possibilities in the formation of his legacy, particularly with recent events reframing the context in which his music will now be received. What themes will his project be centered around post-mortem? What boundary will he break next? How will he continue to shake the room from beyond the grave?

When the clock struck midnight on Thursday, fans were gifted the first single off his debut. The gripping “Make It Rain” repurposes lyrics from his appearance on Lil Tjay’s “Zoo York” into a commanding hook, and is coda-ed by an exceptional verse from Bobby Shmurda’s GS9 comrade-in-arms Rowdy Rebel, delivered via a prepaid correctional facility call. “Hello, this is a prepaid call from… Bobby Babayyy!!!” If there was ever a song that tangibly reflects the framework of pain and loss that reverberates around the fringes of New York’s rap scene, it’s this one: Pop Smoke delivering his signature timbre from beyond the grave and Rowdy Rebel getting “the call behind the wall,” triumphantly rising to the challenge, awaiting his moment of redemption as the streets scream “no justice, no peace.” It’s eerily timely, and as defiant as ever. You would expect nothing less.

Two decades ago, Notorious B.I.G.’s final studio project, Life After Death, was released two weeks after his death, already fairly complete. It was a double album replete with mafioso themes and ominous double entendres set to the signature captivating storytelling that made Biggie Smalls an unparalleled talent. On closing track “You’re Nobody (Til Somebody Kills You)” he raps, “Sh*t's official, only the Feds I fear.” Even on a song full of bravado and swagger, the specter of law enforcement looms large enough to make for an uncannily prophetic epilogue. In 2020, that oeuvre remains ever-present in artists like Pop Smoke, who vocalize tension with the police state on songs that portray trauma, bluster, survival, elation, and trying to find revelry amongst it all. That, more than anything, resonates in the youth that take to the streets day after day, fighting for freedom from the oppressive scrutiny that has for so long gripped their lives.