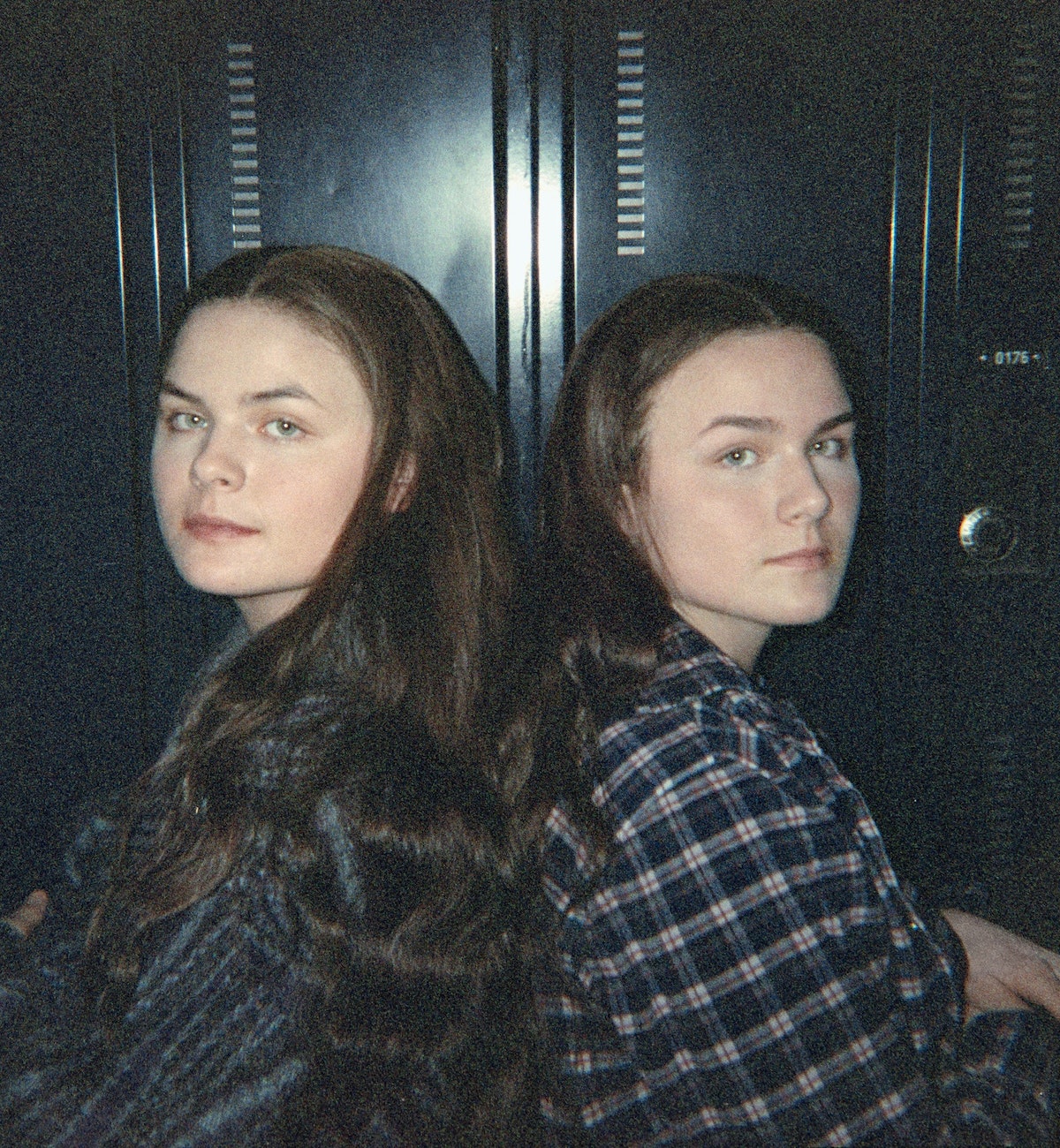 Of all the viral-ish videos to launch a Hollywood career, the ones that changed Railey Gilliland’s life are surprisingly low-key. On TikTok, she’d often film herself from the front seat of her car, talking about what she bought for lunch that day or offering her thoughts on her favorite energy drinks. In other videos, she’d recruit her identical twin sister, Seazynn, for fit checks, lip-sync clips, and other trends or challenges that showcased an innocent hamminess: They were trying to be entertaining, sure, but without the polish or clear ambition of someone gunning to be a professional content creator. It’s as if the only reaction they really cared about was the one they got from each other.

Tegan Quin couldn’t get enough of them. She and her own identical twin, Sara, who make up the acclaimed alt-pop duo Tegan and Sara, had published a memoir of their teen years in 2019 called High School that they were adapting into a television show with writer-director Clea DuVall. Maybe it was fate, or maybe it was just her phone listening in on her talking about twins, but the algorithm started showing her Railey’s videos last spring. “There was a silliness and goofiness between the two of them that reminded me of the VHS footage we found of Sara and I,” says Tegan, who circulated the videos among her high school friends. “I was just like, ‘Oh my God, I think these twins could play us.’”

There was just one hurdle: Neither Railey nor Seazynn had acted or played music before. But it is a testament to the X factor on display in those TikTok videos that the Gilliland sisters, 21, got the job anyway and will make their professional debut in High School, whose first four episodes premiere Oct. 14 on Amazon Freevee. A nostalgic teen drama in the vein of My So-Called Life, High School tells the story of two sisters privately struggling with their identities in mid-’90s Calgary, and the way music eventually bridges the rift between them. “In our search, we were just not finding twins that had the essence of Tegan and Sara or were both queer,” says DuVall. “It really seemed like we needed to find a unicorn — and we found two.”

Sitting across from the Gillilands at a picnic table in Los Angeles’ Sycamore Grove Park — a favorite hangout spot since they visited it for Dyke Day LA in June — their understated charisma is readily apparent. The gregarious Railey, with her curlier hair and cheek-to-cheek smile, never sounds anything but unfazed by her accidental TV stardom. “So many people would tell us, ‘You've never acted before, and now you're the leads of a TV show!’” Railey says. “I'm like, ‘Oh, is that hard to do? Is that not common?’” (When I joke that she sounds like Elle Woods in Legally Blonde, Railey looks at me blankly, making me feel absolutely ancient.)

Meanwhile, Seazynn, who drove them to the park on her blood-red Buddy scooter, is more reserved, speaking up mostly to offer dry commentary on Railey’s answers. She is comfortable with pauses in a way that makes you desperate to know what she is thinking, and capable of saying plenty with just an arched eyebrow or some side eye. Being a twin, she says, means getting used to the fact that people are always trying to get inside your dynamic and understand what’s being said between you and your sibling. She does the same thing when she encounters other twins. “People staring at us isn't something that's strange because that's happened our entire lives,” Seazynn says. “I've always been like, ‘Oh, they're trying to find out if we're twins or not — or find out if we're boys.’”

They grew up in Fresno, California, with a father who works in the prison system and a mother who refurbishes furniture. (They have a younger brother and two older half-siblings.) Neither twin recalls any serious interest in performing, though they have plenty of childhood stories about making YouTube videos or writing silly songs to perform for their family on karaoke machines. Both knew from an early age that they didn’t want to stay in Fresno. “Everybody there is feeling stuck,” says Railey, who thought she might want to become a chef. “Fresno is not really a place of opportunity,” adds Seazynn. “I’ve always known I’m getting out of Fresno and somehow getting here. I didn’t know this was the way.”

College was not for them: Seazynn tried a semester at Fresno City College — “Failed four out of five classes and never looked back,” she deadpans — while Railey blew off online courses. They worked various jobs in food service, most recently at Round Table Pizza, and made TikToks for fun in their free time. Railey was the more active poster and often had to convince Seazynn to participate, but the videos of the two of them always got a lot of attention. In 2019, a video in which they dressed alike as they went in and out of frame — fooling viewers into thinking there was just one of them, until a surprise reveal — got over 10,000 views, according to Railey. (She has started and deleted multiple TikTok accounts over the years.) “That was probably my fifth video I made, and it blew up,” she says. “And then I just knew that I had good ideas.”

“People staring at us isn't something that's strange because that's happened our entire lives.”

As they built a following, other users would leave comments saying they resembled Tegan and Sara, but the Gillilands never looked them up — their music taste leans more toward artists like Blackbear and Post Malone. In fact, Tegan and Sara initially had trouble reaching out to the Gillilands about auditioning for High School because Railey didn’t follow them back on TikTok; the band took to social media to ask if anybody could help them get in touch. “I was at work, and I had gone on my lunch break, and I go on TikTok and I’m like, ‘Why do I have so many notifications?’” Railey recalls. Seazynn, with a sarcastic eye roll, adds “‘Which one of my videos was I a creative genius about?’”

They connected with the show’s casting directors, who asked them to film a self-tape and later brought them in for an in-person audition. “Oh my God, so embarrassing,” Railey says of the self-tape. “We had never seen a self-tape in our life. We didn't know you set up the camera and stand in front of it. Here's what we did: We set up a camera in the corner of the room and acted out the entire scene, like we were shooting the TV ourselves.”

They also dodged repeated requests to send in videos of themselves singing. “They probably asked us five times,” Railey says. “Every time I had an excuse: Sorry, I have to go work.”

“‘I’m not with Seazynn right now!’” Seazynn chimes in, laughing.

“And eventually we got away with not doing that.”

Throughout the casting process, they worked with an acting coach who reported back to DuVall about their capabilities, but at no point did they throw themselves into research. They are open about the fact that neither of them have finished High School. Railey made it through a third of the audiobook, while Seazynn says she read two chapters. (Tegan finds this “both hilarious and odd,” but also suggests it’s a kind of creative choice, too: “It’s almost like, to stay in their characters, they don’t even want to know what comes next.”)

Production let them choose which sister to play, which was an easy decision. In the pilot, the characters come to blows after Sara ices Tegan out to spend more time with her secret girlfriend — and it just so happens that, when they were younger, Seazynn also had a secret girlfriend and at times pushed Railey away. “Basically Sara was being mean to Tegan [in the script], and Railey said, ‘That's you,’” Seazynn recalls. (Their dynamic maps onto Tegan and Sara in other ways: When I ask them about their favorite Tegan and Sara songs now, Seazynn immediately lists three songs for which Sara is the primary songwriter — “Sentimental Tune,” “100x,” and “White Knuckles” — though she is still learning to tell them apart musically; Railey, meanwhile, plugs the band’s new record, Crybaby, out Oct. 21.)

By the time the show started filming in Calgary this spring, everyone was convinced of their abilities — DuVall recalls feeling particular relief when they crushed it at the first table read — except the Gillilands themselves. The twins recall having regular freakouts before scenes and needing DuVall to talk them through it. (She, along with Tegan and Sara, were never far; during production, they all lived in the same apartment complex.) Seazynn says she even tried to walk off set a few times to avoid filming. “We shot for three months, and for the first two months, nearly every time before we shot, I thought, ‘I can't do this,’” Seazynn says.

“We were all in this new experience together,” says DuVall, who had directed films like The Happiest Season and The Invention but had less experience directing television or working with first-time actors. “The moments when they struggled and we were able to work through it together are some of my favorite memories of making the show. It was them coming up to something that they thought they couldn't do, pushing through and not only doing it, but doing it extremely well. I was so proud of them for not giving up.”

Today, the twins live a quiet life in LA. “I just sit in my apartment and I sit in the park,” Railey says with a shrug. Seazynn was briefly working at a bakery but had just been fired for reasons that were not quite clear to her. (“The boss just told me that we weren’t a good fit,” she says. “So be it. We probably weren’t.”) They help each other prep for separate auditions and mostly hang out with people they met through High School, like DuVall, co-showrunner Laura Kittrell, and co-star Olivia Rouyre.

They are still processing the ways their lives have changed. Before the show, Railey had never been on a plane. “I'm like, ‘How did my life do a complete 180?’” she says. “I had no money in my bank account. I'd overdraw and ask Seazynn—”

“Because I could not pay the overdraft fee. There are so many times where I'm like, ‘Wow, I'm an actor, this is so crazy.’”

Seazynn admits to having a harder time with it. “When Railey first came to me like, ‘I got this message from Tegan and Sara and they want us to do this audition for their TV show,’ I said, ‘Absolutely not,’” she recalls. “And then after I said, ‘OK, we'll do it,’ and then we got the call that we got the job, I still thought, ‘I'm not gonna do it, I'm gonna find a way to turn it down and not go.’ Obviously that's not how it happened. I just didn't want anything to change.”

“She was used to her life, and I was up for a change,” Railey says.

“It’s a lot, especially since it’s all so new,” Railey says, gazing off into the park but, I realize, talking to Seazynn. “It would be overwhelming to anyone.”

This is the upside of making your big TV debut on a show about identical twins: having someone by your side who understands the infinite ways your life is changing. As our conversation winds down, I notice their bodies have shifted, and by the time we finish, they’re sitting cross-legged on the picnic table bench, having turned away to look right at each other.