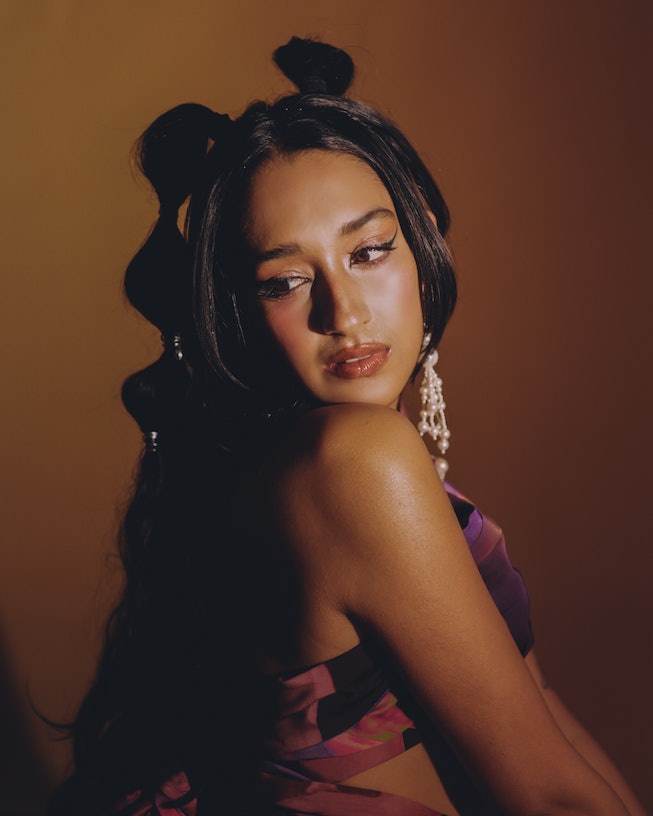 Raveena’s sophomore album, Asha’s Awakening, transcends space and time. Released in February, it tells the story of Asha, a Punjabi space princess who, under the tutelage of aliens, learns lessons of spirituality and “cosmic magic,” then returns to Earth to travel through history experiencing love, loss, and connection.

If it sounds like an undertaking of epic proportions, it was. The sumptuous, genre-defying record was born and honed over the course of three years, many months of which were spent in lockdown. But for the 27-year-old singer-songwriter, it also marked a transformative moment for her as an artist. “I think I've always had a really strong vision, but it's really hard as someone that is a bit more submissive and soft to find that balance of how to be a boss in a sense and really tell people what I want in every area, and make sure that everything falls under a really strong, cohesive vision,” she says. “Learning how to do that in a way that felt authentic to me and still true to who I am took a long time. I think I finally found it now. I found that both strong and soft energy can exist all at once.”

Basking in the sun on her porch in Pasadena during a recent Zoom call, Raveena considers the vast changes her life has seen since releasing her breakthrough EP, Shanti, in 2016; in just a few weeks, she’ll make her debut at Coachella. She’s excited to showcase the growth she’s experienced over the last few years as she continues to train herself in dance, voice, and aerial silks, a new skill she learned to shoot the music video for her “2000s pop fantasy” song, “Secret.”

The wider cultural significance of her appearance at the festival isn’t lost on her, either. “I realized I'm probably one of the first South Asian women ever to play,” she explains. “I can name MIA and maybe one or two other people that are not coming to mind right now. It's nuts thinking about that. In the history of Coachella, I'll be part of the first three or four people to play as a South Asian woman.”

It couldn’t have come at a better time for Raveena, whose plush and diaristic R&B sound undergoes dramatic metamorphosis on her latest record. She breeches hip-hop, pop, and psychedelic dance while marrying them with the sounds of South Asian music across the 15-track record. The result is a stunning, sonically rich journey that pays homage to her heritage and finds new ways to experiment. On standout track “Asha’s Kiss,” she duets with legendary Indian singer Asha Puthli for a pulsing, evaporative love song that hits you like a cloud of Aphrodite’s strongest potion.

“I already knew there was a huge shift happening in my music,” Raveena says of making the record. “I feel like I was tapping into this childlike joy that I hadn't really allowed myself to tap into in a long time.”

Yet the tenets that make a Raveena song a Raveena song — candid vulnerability and an emphasis on healing the feminine, spiritual, and divine — are stronger and more present than ever across the project. While she explored those same themes through the lens of trauma and perseverance on previous albums like Lucid, on her latest, she’s more so building an altar to honor and nurture those parts of herself — and yours, as well.

At the end of Asha’s Awakening, Raveena takes the listener on a cosmic 13-minute guided meditation filled with the soft sounds of chittering birds, whirs of dragonfly wings, and the rhythmic buzz of crickets. Her gentle voice calls down from the heavens, commanding you to breathe, to recenter, to restore: “You are healing, you are calm, you are filled with joy,” she says. It’s the most direct manifestation of her music’s ethos, one that she hopes will be received in full on one of the world’s largest stages come April.

“I hope that people feel the purity and intention behind the music, because all I want to do is, honestly, just provide a source of comfort for people,” she says. “Provide a source where they can empathize through the lyrics, be a source of love. I really do feel like that energy can be felt when a person is receiving your art. I try to be really intentional about the energy that I put into it, and I hope it's received.”