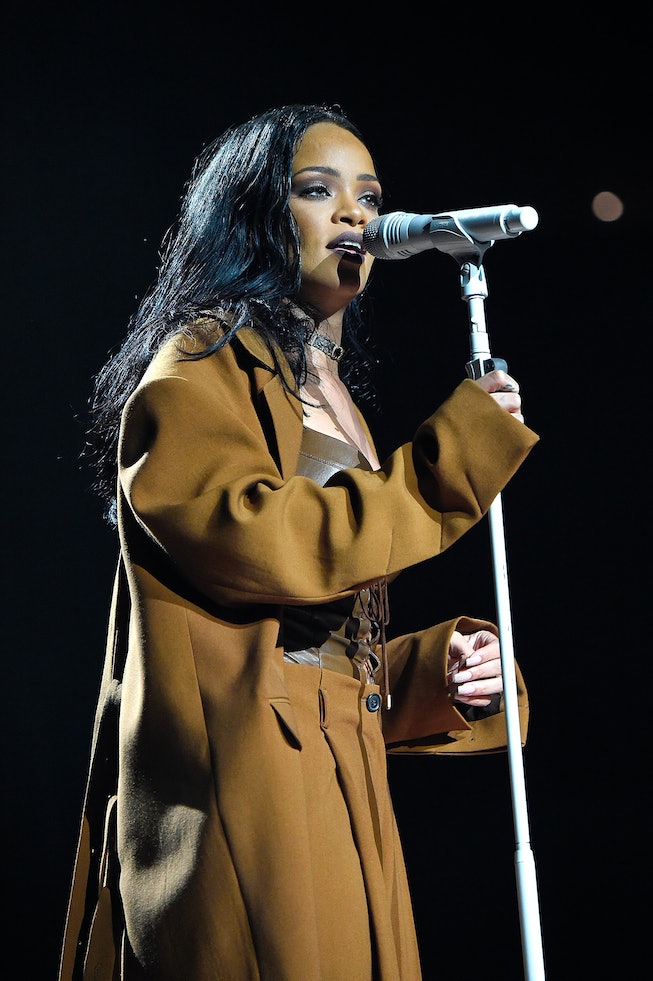 Rihanna is headlining the 2023 Super Bowl halftime show and all I can think about is who she’s bringing with her. With seven studio albums and countless collaborations under her belt, it's no secret that the Fenty Mogul has plenty of options to choose from. Though I wish we could just scrap the game and turn the Super Bowl into Rihanna’s comeback concert, in reality, the singer only has 15 minutes to work with. And with such a short amount of time to fill, I can’t help but wonder who will make the cut.

According to TMZ, Queen Rih reportedly has a list of over 50 artists she’s contemplating on bringing on stage with her, though she hasn’t made any final choices yet. Sources close to the singer told the news outlet that anyone she’s collaborated with thus far is “fair game,” but there’s also a chance she does the show solo — a power move that we certainly wouldn’t put past the super star. In years past, however, each Super Bowl performer has brought a guest with them, so odds are we’ll see at least one familiar face come Feb. 12, 2023. Until we’ve heard her final decision, I’ve rounded up all the potential guests Rihanna could bring — just in case she needs some inspiration.

Anti is arguably Rihanna’s best album, so it only makes sense to tap SZA for her first number. Imagine the lights go up and you hear the first beats of “Consideration” while both singers ascend onto the stage. It is simply the opener we deserve.

Another no-brainer. If Rihanna chooses to feature multiple songs from Anti, it only makes sense to bring Drake out for “Work” — the dance-hall-inspired song is sure to be a crowd pleaser — and the slew of other songs the two have collaborated on together over the years.

This might be a hot take but I think “FourFiveSeconds” is one of Rihanna’s best songs. Her throaty vocals paired with Paul McCartney’s guitar skills get me every time. In a less dystopic world, Kanye could join for his verse as well and stick around to perform some of his older hits with Rihanna (i.e “All of The Lights,” and “Famous”), but we doubt the NFL will want to deal the press liability he might bring.

“Umbrella” is the obvious choice here, but “Run This Town” would also be an easy pump-up song to invigorate the crowd. A cameo from Jay-Z would simply add to the fun.

If she wants to go the nostalgic route, Rihanna could ask Ne-Yo to hop on stage for an acoustic version of “Hate That I Love You.”

Harris and Rihanna made the song of the summer in 2016 with “This is What You Came For.” With over two billion streams on YouTube, it’s also arguably one of Rih’s biggest songs. This would be the perfect ender to her setlist.

Though it comes from a darker period in Rihanna’s life, “The Monster” featuring Eminem could add an unexpected twist to her show while bringing back one of last year's performers.

Their feel-good track “Live Your Life” is sure to get the crowd amped for the next half of the game.

While Nicki isn’t the most obvious pick, just imagine these two super stars on stage together. Rihanna’s collaboration with the queen of rap, “Raining Men,” is a perfect song. It’s witty, catchy, easy to sing along to, and pairs Nicki’s flawless bars with Rihanna’s can’t-be-bothered musical flair. A live duet featuring these two stars would be absolutely perfect.

Sure, they don’t have any songs together — yet — but imagine the sheer power they would emit if they took the stage together. Let’s make it happen, Rih!