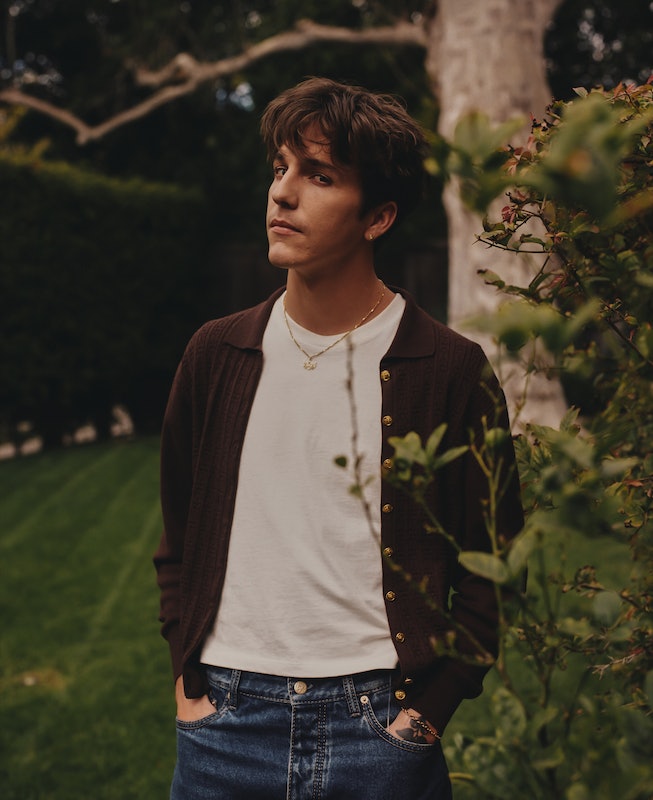 On the title track of RX, the debut album of the artist known as Role Model (Tucker Pillsbury), the singer lists the various ways he’s tried to feel better over the years. “It’s the ways I’m medicating/ It’s the apps for meditating/ It’s the way they never work/ It’s the high I’m always chasing/ It’s the friends I’m never making/ It’s the people that I’ve hurt,” he croons over a simple acoustic guitar melody, intoning the sort of DIY self-care many of us have picked up over the years in lieu of real mental health treatment.

In fact, the chorus continues: “I don’t need therapy/ Just someone that’s there for me/ ‘Cause that’s all that really matters anymore.” The simple song, which also closes the 11-track album, is something of a thesis statement to Role Model’s overall work. His chosen moniker is a tongue-and-cheek nod to the dark period of life during which he first began making music. “I was doing drugs and drinking a lot,” he says, “which are things that I never did through high school. I was such a good boy, and I just was going through this time and I started turning into this… whatever. The opposite of whatever a ‘role model’ would be.”

After growing up in outdoorsy Maine — and being into skating and snowboarding but never really music beyond the rap music that often soundtracks those sports — Pillsbury went to college in Pittsburgh, where he quickly descended into an overwhelming bout of depression.

“I came to the realization that I was not happy,” Pillsbury says of the time, speaking from bed on a Zoom call, often pushing his floppy brown hair back and sipping an iced coffee. He’s in New York to film the last two music videos for his RX rollout and thinking back on that time in Pittsburgh. “I was extremely alone,” he says. “I was living alone. I didn't have friends after my freshman year. And it was one of the most isolated times in my life while dealing with something that I had no idea about. My mom had told me that [my brother] was depressed when I was younger. And so I remember texting him at one point and just being like, ‘Why am I feeling like this? Why am I just crying 24/7?’”

Pillsbury says his brother was a source of support through that period, noting, “It’s in our blood or something.” But he also found relief in another saving grace: music.

“I was making all these songs in my closet, in my room with no windows, and it was the one thing that I could do,” he recalls. “I think a lot of that early stuff, even the stuff I didn't put out, was very depressing and honest and everything.” Pillsbury discovered music as an outlet after two friends who were into rapping left their equipment temporarily in his dorm. It was then he realized he had not only a passion but also a knack for songwriting. Before that, he says, he “just never was exposed to the fact that anyone can pick up a microphone and just do it. Which now is very obvious.”

When a song of his caught the attention of Pittsburgh native Mac Miller’s team (after he’d failed out of school), Pillsbury took it as the sign he needed to fully pursue his new calling. “I got to sit with him one on one in his little home studio,” he says of the late rapper. “There's so few people in the world that just give you their whole attention and make you feel like the center of their world and care about what you have to say when you're talking. You can tell that he loves music and he just wants to help people, and he helped me when I had no name or reason to be helped.”

“I just embrace the imperfections, because that's what the name stands for now,” he says. “You can hear it in the music. My voice is not perfect. Nothing is perfect about it, but I hope that it will do good things for pop music and see if we can get one on the radio someday.”

Of his own headspace, the singer says that falling in love — with someone often speculated about but whom he doesn’t name — has transformed him once again. “I had always been very scared of relationships and how they would affect my music — just stupid reasons,” he says. “I was very closed off to relationships and getting close with anyone. And it happened, beyond my control, over the past two years. And it hit me like a train. That genuinely felt like the closest thing to a cure or a remedy. And so I wrote a whole album about it. Yeah, I would say I'm doing a lot better because of that. And just going outside more. Taking care of myself. I would say I'm doing a lot better.”