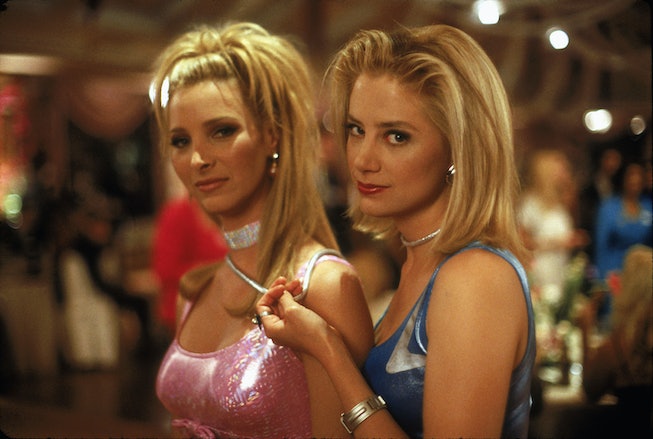 Since delighting fans with a nod to Romy & Michele’s High School Reunion at the 2022 SAG Awards in February, Lisa Kudrow and Mira Sorvino have apparently been in talks to get a sequel to their classic 1997 underdog film made. On Wednesday, June 29th, both actresses hinted at an upcoming film during separate media appearances, making the reality of a reboot more real than ever.

Sorvino let it slip on the Today show that her team was “getting closer” to a sequel project, 25 years after the original movie came out. "There's nothing official to report but I can unofficially hint that we're closer than we've ever been to getting something to happen," she said. The same day, Kudrow made an appearance on “The Jess Cagle Show” on SiriusXM and said that Robin Schiff, the writer of the original film, is "thinking about it and coming up with something. Isn't that thrilling?"

It’s no wonder, given how every time the pair are seen together, fans clamor for a on-screen reunion. It happened in 2019 and again during the aforementioned SAG Awards appearance, when Kudrow and Sorvino wore electric pink and blue outfits reminiscent of their characters’ and even did a gag with Post-Its.

The film’s costume designer, Mona May, broke down for NYLON the 40 outfit changes the actresses went through for all of the movie’s iconic looks. She also revealed that Kudrow was the one who suggested that the two characters wear coordinating outfits for the infamous final reunion look.

“Lisa asked what Mira was wearing, so I showed her the dress and she was like, ‘You know what, I feel like we should be very similar’ and started discussing it,” May said. “And I felt it was really smart, because we concluded that you don’t want them to be too different. They’ve grown up, and they are the best friends. And it’s about them coming to their power in a way. Like, screw it, ‘we can be ourselves!’ So it was less distracting, more uniform, and really kind of connecting them together.”

NEXT UP
Culture
M3GAN S3QU3L Will Be Released January 2025
Entertainment
See a First Look At Marisa Abela as Amy Winehouse In "Back to Black" Biopic
Culture
Loewe’s Howl's Moving Castle Collection Is An Anime Dream
Culture
The Madonna Biopic Is Being Scrapped
Style + Culture, delivered straight to your inbox.