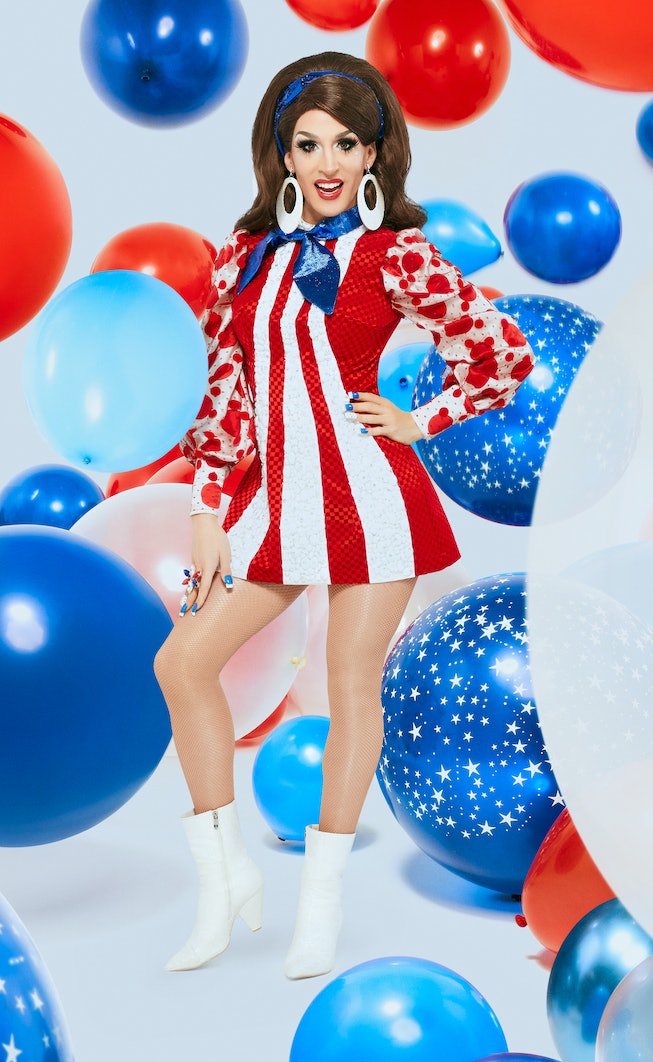 Every week, NYLON writer Michael Cuby will conduct an exit interview with the queen eliminated from RuPaul's Drag Race Season 12. This week, queen Jacki Cox was asked to sashay away.

Jackie Cox came onto RuPaul’s Drag Race with a very noble goal: to give a voice to “queer Middle Eastern kids who are scared to come out to their parents.” Luckily, during her stint, the New York-based queen was able to do just that, spending more time in the top than she ever did in the bottom, all while injecting her Middle Eastern heritage into her performances and looks wherever she could. Still, despite her clear talent, Jackie never managed to secure a main challenge win — something she often joked qualified her as the “Susan Lucci of season 12.”

A self-described “nerdy queen” whose obsession with all things sci-fi was well-documented, Jackie’s unique brand of drag carried her all the way to the top five, but as the competing queens dwindled down, Jackie’s tendency to be close-but-no-cigar started to stick out. After overusing a one-note “I’m from Canada” joke in the “Choices” debate challenge, Jackie found herself in the bottom for the first time. She landed in the bottom again the following week, and stayed by the skin of her teeth thanks to RuPaul’s much-coveted Double Shantay. But when she landed in the bottom for a third time, it was clear that her fate was sealed. After a spirited lip-sync to Jennifer Lopez’s “On the Floor” (which, yes, included the Pitbull verse) against first-time lip-syncer Crystal Methyd, Jackie Cox was unsurprisingly forced to pack her bags.

Ahead of her elimination last week, NYLON hopped on the phone with Jackie Cox to talk about making it to the top 5 but not to the top 4, being the Susan Lucci of season 12, whether she regrets her Untucked comments, and how she feels about that incredibly awkward moment with Jeff Goldblum.

So what went wrong with this challenge?

I think there are so many things that happened. First, what an incredibly talented group of queens that I was so lucky to perform with on stage. We all pushed each other to be the best versions of ourselves — and I don’t mean that in a pageant way. I mean that like, oh shit, I have to step it up if I want to ever hold my own against any of these queens. We just all kept fighting for it.

There were a few challenges. I was in the top five times where I easily could have had a win but the cards just didn’t fall my way. So by the time we got to the end, I was honestly surprised I had made it this far knowing that there were a few moments where I had fallen short. I’m certainly proud of what I did, but the cards didn’t land the way I wanted them to and I have no regrets.

As you said, you were on top more than you weren’t but never actually won, which led you to deem yourself the “Susan Lucci of season 12.” How did it feel to know that you were consistently good but never good enough to cross the threshold of a win?

I just joked about it while I was there but I do still stand by it. Part of the irony of being a Susan Lucci is being someone who does really well, who’s always been at the top, but just doesn’t get a win. To me, it kind of goes to show how, in some ways, unimportant a win is. What’s important is doing well and succeeding at what you do, and if one person — being Ru herself — chooses someone else over you, it’s not that you didn’t do well. It’s just opinions at that point.

I’m so proud of all those times I was in the top. And even those times where I was in the bottom, I was still proud of what I did knowing the circumstances. But that was my big takeaway: Sure, it would be nice to have a win, but the most important thing was that I was proud of the work I did. Being in the top feels like a win to me. Whether or not Ru thought it was worth a win is secondary. Sometimes, I have to take Ru’s advice: “Unless they’re paying your bills, pay them no mind.”

On the other hand, there was the moment in Untucked where you all talked about the significance of putting on your entrance looks again for the “Mama, I Made It” segment, and you talked about how much you had evolved since first coming into the Werk Room.

I think the biggest thing I learned was to let go of my version of perfection. I think all of us in the finals had that idea in our minds of what the perfect version of ourselves was and we had to learn to let go of that and know that who we are and what we bring to the table is enough as it is.

For me, a lot of that was this idea that whenever I was doing more scripted-type challenges, it didn’t work as well as when I was speaking from the heart or riffing. Like, in the mini-challenges, that’s when I noticed I got the biggest belly laughs from Ru — and that was stuff I was just coming up with off the top of my head. I literally thought of Pertha Kitt while falling asleep backstage in full kitty-cat quick drag waiting for them to build that litter-box. I fell asleep, and in this fever dream, I thought, oh yeah, Eartha Kitt is kind of a cat. What if I was Pertha Kitt? I had never done an Eartha Kitt impression in my life. I just made it up on the spot. So I think that was a big lesson for me, to just trust my instincts and let go a little bit.

I know one of your main goals was to bring visibility to queer Middle Eastern people. Do you feel you were able to do that effectively during your time on the show?

Even just since the cast was announced, where I did my RuVeal look with the green hijab and the protest words saying “we are countless” printed on it. From that moment until now has been this huge crescendo of people in the Middle Eastern diaspora and beyond reaching out to me and posting about me. They’re just so happy and grateful to see themselves represented on TV. People have been telling me they’ve been able to use my run on Drag Race as a door to open up conversations with their families, share drag with their parents, and share their queer identities. That’s been incredible for me. Some people are reaching out in countries where I don’t know how they’re even getting Drag Race; they must be watching it on some illegal dark web somewhere because these aren’t shows that are even allowed in some of these countries. The fact that people are seeking this out, finding it, and then finding me to actually tell me how much it means to them is… I’m beyond humbled and grateful that that’s been the reaction.

Going off that, you wore that gorgeous American flag-printed hijab for the Stars&Stripes runway, which led to an awkward moment with Jeff Goldblum pointing out this religion’s historical mistreatment of women and queer people. How did you feel in that moment?

In the moment, I was very emotional because I felt the weight of millions of people on my shoulders and didn’t want to disappoint them or do wrong by them by letting what was said be the statement. I wanted to really refocus the statement around the point that I was trying to make, which was that whether or not there are oppressive government regimes in these countries that do and say things in the name of religion, that doesn’t give anyone the right to personally persecute people for their own expression of their culture or religious identity.

I think it’s really important to separate those two things, and hopefully I did a little bit of that for Jeff, as well. I’m definitely happy that it opened up this conversation. It’s something that I hope we can continue to have. I’m not here to hide away from any of these conversations. I want people to keep asking questions, keep learning and growing. The same goes for me too. I learned so much about how the general world feels about so many of those things. A lot of it has been really positive and I’m so glad that I’ve been able to be that positive voice.

During Untucked, you all revisited the season’s shadiest moments, and yours was criticizing the other queens for their Snatch Game performances. Do you regret that moment?

What’s interesting about Untucked is that it’s a platform for us to honestly say things that probably none of us should say. In real life, when you go through something like a competition or anything high-stakes where you feel really emotional, you’re never going to talk to someone. I’ve been in a drag competition before, and before the final judging, I would rarely ever go to another queen I was competing against and say, “Hey, how do you think you did?” But because it’s a TV show, they want us to get into our minds, explain how we’re feeling, and share that with each other — which is kind of unnatural, right?

Going from the previous week when all of us had done so well in the acting challenge — when Ru felt like it was splitting hairs — into Snatch Game where Ru seemed pretty disappointed with us as a group… There’s a part of me that should’ve been a high school theater teacher because I wanted us as a group to do well again for Ru. That’s what was driving me to poke at the other girls. But I really shouldn’t have said anything because it is what it is. Certainly for those girls who didn’t live up to their own expectations, there was no reason for me to bring that up again. But again, “Untucked” is a very unique little fishbowl into the minds and hearts of people who are in the craziest pressure cooker of drag.

You made it all the way to top 5 but didn’t cross the finish line to the top 4. Does it feel better to get close and not make it or would you rather have not even had that tease?

I’ll tell you this. I would have either liked to go when I’m going now — which is going home on a lovely sunset — or win the whole thing. I kind of figured out once we got to my second time in the bottom that it wasn’t my time to win Drag Race. So with that being in my mind, my goal was to just stay on as long as I could to keep showing my drag, so I’m happy that I got to be in every episode of this season, and I think I got to go out on a high note. I’m very proud of what I did. Like I said, if I wasn’t going to win the whole thing, I’m happy to leave right before the finale.