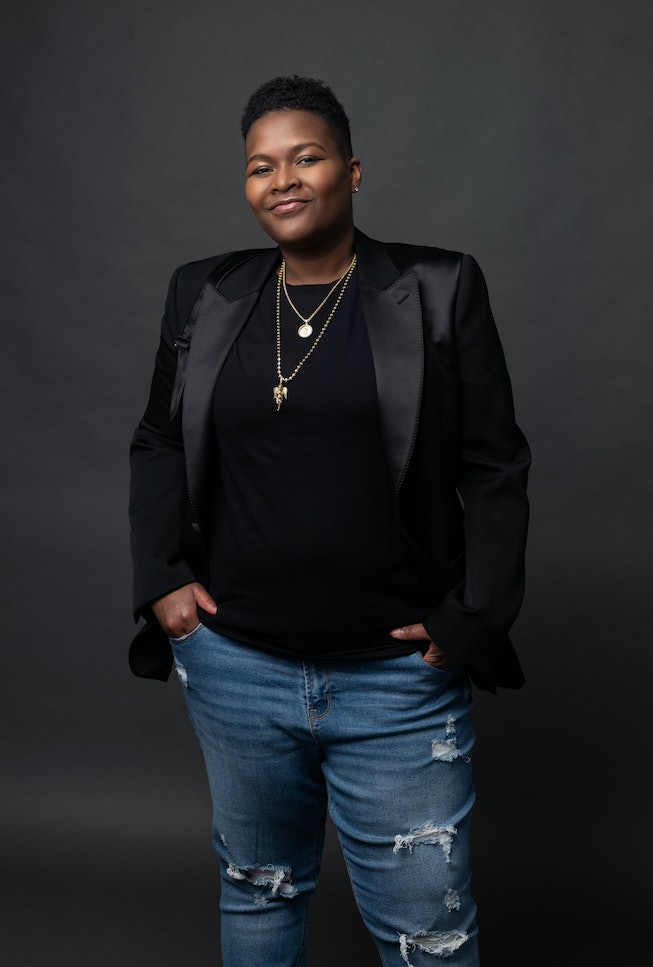 Sam Jay’s first ever open-mic was in the basement of a dingy Boston pizza shop. She was last on a line-up of 20 comics and performed to four people. “It was a shit show. I did three minutes about Mutant Ninja Turtles and that was it,” she says. “I was like, ‘I have to keep doing this.’”

That was eight years ago, when Jay was 29. She kept hustling in her hometown of Boston’s open-mic scene for three years — “Three minute spots, turned into five minute spots, turned into fifteen minute spots, that kind of grind,” she says. By year three, Jay had enough buzz to be considered for Comedy Central’s “Comics to Watch” program. She didn’t get it, but she would the next year, after moving to Los Angeles. There, she became friends with a few “pretty popular comics” (“from the underground, not like Kevin Hart”) who showed her the ropes and hooked her up with the right shows. After Comics to Watch, she got Just for Laughs festival’s prestigious New Faces showcase (alums: Hannibal Burress, Michelle Wolf, Pete Davidson, Ali Wong) in 2017. Saturday Night Live producers caught her set at the festival and invited her to audition for SNL.

Now 38, Jay has been a staff writer on SNL for three years, and dropped her debut comedy album, Donna’s Daughter, in 2018. Today, her first full-length Netflix special, 3 In The Morning, goes live. “There was never a big break, it was just a culmination of work,” says Jay. That’s also how she describes her special: “a culmination of my entire career up to this point.”

What are the pillars of Jay’s career? 3 In The Morning begins with a bit about the last dick she ever sucked before coming out as a lesbian. “Every time I think about it, my mind’s blown. Like bitch, you were sucking dicks! I don’t like dicks at all. I don’t even like wearing ‘em when bitches ask me to… And I was suckin’ whole dicks, just puttin’ ‘em in my mouth!” she says, shaking her head and blinking exactly the right number of times for the punchline to pop. “The shit we’ll do to fit in.”

Jay might have sucked a few dicks back in the day, but she’s never watered her comedy down to appeal to the straight, white mainstream. Her best jokes mine gay culture, racial politics and gender dynamics, often all at once, such as one bit about her indignance that her girlfriend left the door unlocked while she was in the shower “as if a rapist would be like ‘Nah, she’s got a fade.’” (The bit extends, with Jay discussing how the couple would divide and conquer if there was an intruder: “Bitch, you’re on the balls, ‘cause I pay the rent.”) 3 In The Morning traverses much of the same material as many comics — travel, family, dating, celebrities, being in your 30’s, Donald Trump. Unlike many comics, Jay’s jokes on these topics are funny, surprising and honest. Her voice is especially refreshing on Netflix, which offers more specials by Jim Gaffigan than queer Black women.

And Jay makes being your authentic self look easy. This ease with herself might have something to do with entering the industry later in life, after plenty of years of existential crisis. Comedy was always a part of her DNA. She grew up on BET’s ComicView, worshipping Damon and Kim Wayans, Eddie Murphy, Chris Rock, Dave Chapelle and Niecy Nash. She studied communications in college, but dropped out, seeing it as a dead end. She worked at Starbucks, BestBuy, in the mailroom at the IRS, a life insurance firm and a shipping company, before leveling with herself that she needed to try comedy.

“I was just waiting around,” she says. “I was floating through life trying to figure out what I was supposed to be doing. Fear got in the way. But I always wanted to do it.” Just before her 29th birthday, she made a decisive choice. “I realized that if I didn’t pick a direction, life would take me in whatever direction it felt like,” she says. As her grandmother would say, Jay decided she had to “shit or get off the pot.”

The comic says she never would have succeeded if she’d tried to tamp down her queerness or Blackness. “It wouldn’t come off right,” she says. “If you’re not being authentic, they can smell that.” Her confidence has come over time. “When I watch the special, I feel so whole,” she says. “When I was younger, I’d rush to the punchline. I was so anxious to get the next laugh. I craved the crowd’s approval. Now I trust myself, and you just need to trust me too.”

Jay can be contrarian. 3 In The Morning includes takes on #MeToo, liberals and Greta Thunberg that will make New York Times readers clutch their pearls. Occasionally, these takes can feel a little rushed, like a bit about trans women’s abilities at sports and fighting. But the majority of the jokes are successfully provocative, like questioning if the framing around Aziz Ansari’s alleged misconduct downplayed women’s agency. “I’m not trying to shock people,” she says, “I’m just like, ‘Why haven’t we had this side of the conversation? Why haven’t we talked about it in this way? When you stand on one side of the fence of right and wrong and don’t play in the gray, the conversation has no opportunity to grow.”

Some queer comics are skeptical of SNL as a place they can push forward the conversations they’re interested in. But alongside colleagues like Bowen Yang, Jay’s been a part of making the show funny for more than just middle America. You can see her influence in sketches like “Black Jeopardy: Velvet Jones” which starred Eddie Murphy as a politically incorrect infomercial salesman and “Cha Cha Slide,” which flipped the “awkward white person at a Black event” trope. She’s appeared on screen a couple of times, once playing Carlton in a Fresh Prince of Bel-Air spoof. Back in 2018, before she’d had a single sketch air, she told Vice she wanted to help bring fresh content to the show. “Like urban culture stuff, gay culture stuff…women stuff, that they may not necessarily have their pulse on,” she said. “Just who I am, you know what I mean?”

Still, Jay is a pragmatic when it comes to SNL. “It’s a job,” she says. “It’s funny to me when people are like ‘Oh, I had to compromise. Like, yeah, you have to compromise. I don’t get to write sketches about two women going down on each other or using tons of explicit language. I’m writing for other people. That’s just the nature of business.” She doesn’t see it as unfair, just the nature of the game. She adds, “I would never compromise who I am, but you have to find a way to reach a common goal."

Lore and gossip surrounds SNL’s writers room, but it’s become Jay’s home. “I think it’s a myth that it’s so cutthroat and harsh and mean,” says Jay. “Yes, it’s high-paced and high-intensity, especially once you hit Tuesday night. But it’s also a really supportive environment.” Some Black women writers like Natasha Rothwell, who left SNL after one season, have said it was hard to find their place there. Jay admits she knows people who’ve had “that type of experience,” and that it’s “a place you can get in your head and take things personal that aren’t personal.” For instance, she says, “You might have a question and ask somebody in the hallway and they just walk by you. You could take that and say ‘Oh this place is so mean.’ Or you can go, ‘Everybody‘s really busy,” and try to catch somebody else.” It’s all about what demons you feed and how seriously you take yourself.

Something Jay’s learned over her career is to take herself less seriously. She used to be picky about identifying as a stand-up comic, who wrote sketch on the side. But after three years, she’s started to own it. “Stand-up is the thing I’ll do forever,” she says. “But the longer I’ve been writing sketch, the more I see it as another skillset I have and enjoy.” When asked about the politics about comics not wanting to be called TV writers, she laughs. “Comics look down on everybody. Stand-ups are always questioning how much you really love stand-up.”

Comics have had their dedication to the business tested, lately. Stand-up exists only on Zoom right now, production on most TV shows is stalled, and late night is slowly getting back on its feet. Jay thinks it’s weird to focus on the pandemic’s consequences for comedy when “everything’s upside down.” That said, she’s very grateful she cut her teeth before the apocalypse. “If I were newer, I’d feel a lot of pressure,” she says, “Like, I have a special coming out. If all I had were open-mics, this time would probably be super scary. How do you even do it right now?”

Lockdown arrived at an opportune time for Jay. She’s ready for a break. She’d been crafting the material for 3 In The Morning for more than a year. Before that, it had been a long eight years of grinding to build a career in comedy, often in rooms where no one shared her perspective. Jay doesn’t think about it like that. “I’m an original person. It has nothing to do with my queerness or my Blackness,” she says. “I’m the only person in these rooms or these spaces because there’s only one me. Just like there’s only one you.”