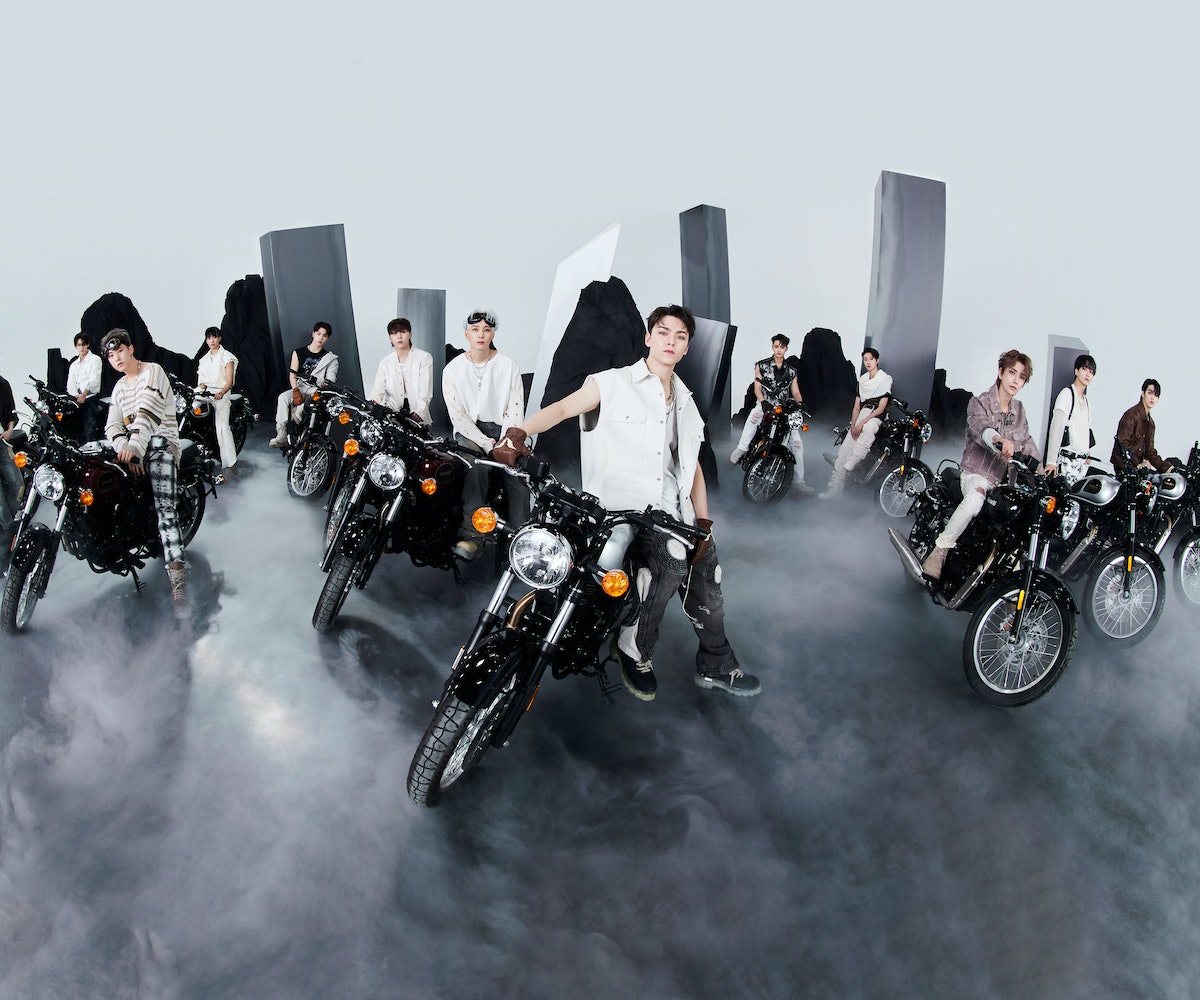 There’s much to unpack in the dizzying music video for Seventeen’s “Hot,” but let’s momentarily linger on Jeonghan who, in the teaser, watches a flock of birds in flight. Strapped to his back is one metal wing, the other torn away. It’s reminiscent of Icarus, the young man who flew too close to the sun. But Icarus perished from his fall, and Jeonghan did not. He gazes skyward, thwarted but not discouraged. He will persevere until he succeeds in reaching those same heights.

On their fourth studio album Face The Sun, Seventeen — S.Coups, Woozi, THE8, Vernon, Mingyu, Jun, Joshua, Dino, DK, Seungkwan, Wonwoo, Jeonghan and Hoshi — are determined for their ambitions to soar in a similar fashion. In doing so, says Hoshi, “We’ll become artists that are like the sun, making a substantial impact all over the world.”

Since debuting in 2015, Seventeen’s impact has already been quite extraordinary. They’ve wielded an unstoppable creative vision, writing and producing all of their extensive back catalog which includes ten Korean EPs. The latest album’s conceptual use of myth, psychology, and philosophy is aesthetically intriguing, but it’s the finer details born from the band’s own truths which imbue it with soul and gravitas. As they face the sun, the members turn their back on the darkness of their personal fears. Yet, as we saw in the video for warm-up single “Darl+ing,” in which the members fall into a mirror world of deep shadow and ruin, no one, not even a multimillion-selling supernova like Seventeen, can ever be impervious to failure.

In May, the band marked their seventh anniversary, an industry milestone many idol groups don’t last long enough to celebrate, and one that feels all the more weighty with expectation — not just creatively but statistically — having outdone themselves with each release. After renewing their agency contract following “a considerable amount of thinking and discussion,” Seventeen is now ready to explore what they’ve collectively termed as a “new era.”

Over a recent Zoom, NYLON sat down with Vernon, Woozi, Joshua, and Hoshi to talk about their latest music, the need for a little bit of madness, and why the term “pop star” gives them the ick.

I think many fans expected your contract renewal, but it was still a relief to hear Seventeen and Carats would be together for years to come. Are you the types to get sentimental about big occasions like this?

Joshua: I mean, we definitely wanted to celebrate but as you know we’re so busy these days that we didn’t really have the time but we just tell ourselves, “Right, we pulled through, this is a new start for us, let’s keep working to improve and strive to succeed.”

Vernon: And because of Covid, we weren’t able to gather together as all 13, but we were definitely happy and…

Vernon: Yeah, relieved about the situation.

Being a pop star, that’s still a job and every job has a routine. After you’ve spent such a long time in the role, where does the internal fire come from and how does it stay lit?

Vernon: Being a pop star, um, that sounds so cringe… [laughs]. We definitely feel responsibility for our fans, there are so many we’ve met, not just in person but through the messages we get online, we’re just overwhelmed with all the love.

Joshua: We definitely can’t leave them out of this equation. During Covid we weren’t able to see them but they showed us support and that gave us so much strength. Carats definitely help us out a lot. They say because of us they were able to overcome those hard times, and that’s one of the reasons we’re able to keep on striving to become better artists.

Why does the word pop star feel so cringe?

Vernon: Because I don’t really wake up and look in the mirror and think of myself as a pop star [laughs]. I’m just a member of Seventeen and we’re just doing our thing.

Hoshi: When I wake up, I think I should wash my hair.

Joshua: We’re all the same people. We think of ourselves as just regular, normal people, that’s why I think the term “pop star” is awkward for us.

Do you all ever have out of body moments when you play huge venues and hear the roar of the crowd? Like, “This is so beautiful” but also “How the hell did I get here?”

Hoshi: We ourselves are often surprised and overwhelmed, in a good way, by how much love we receive from the fans!

In one of our previous conversations, the band said Seventeen’s incredible dynamic was rooted in two overarching elements, empathy and tolerance. But what about the little pieces, those day-to-day interactions that help keep your relationships tight?

Joshua: I can give you an example. Like Hoshi, he’s really into fashion these days, so whenever he wakes up in the morning, he’ll really think about what he should wear. If I see him, I’ll say, like, “Wow, dude you have such great fashion sense,” and he’ll feel good about that.

Hoshi: And because we’ve lived together for such a long time we’re well aware of what could hurt most in what we say, so we’re always careful with each other to be considerate and that way I think our teamwork gets stronger.

How would you define the adversity that runs through Face The Sun? Are those inner shadows the fears depicted in the concept trailers?

Facing one’s shadow or fear is a deeply personal journey and generally done in private. How have you felt about making your fears public?

Vernon: In a way, being exposed itself is a big fear, and I think everyone would agree with that. But when you share your vulnerability, it can show just how powerful you are, and that itself just makes it beautiful in a way.

Hoshi: When people see us, they might think, “Oh, these guys from SEVENTEEN, they always look bright and fun.” But in sharing our feelings, they’ll see that we have the same worries and thoughts as everyone else. So for me it’s more about candid communications.

Hoshi, your inner shadow featured an infinite loop and that intrigued me. Could you explain your film, please?

Hoshi: For me the thing that I fear most is repetition. I’m always hoping for new things to happen in my everyday life, so the repeating of time is expressed through the Mobius strip.

If you find yourself falling into a slump, do you proactively force something new to happen or just try and mentally ride it out?

Hoshi: I rather like my schedule to be free so I can hop in a car and go on a trip or go watch a movie. I like to keep it spontaneous. Like going shopping all of a sudden.

Joshua: I’m always trying to bring new things in on the side, a hobby, reading a book. Something that’s outside of my usual to change it up a bit.

Vernon: You should definitely have things to stimulate you like music and movies, which I love so much that if those are part of my routine, then I don’t mind having one!

Can we touch on a couple of tracks? The first is “Don Quixote.” Why did you all chose this character as a focal point because, yes, he was tenacious and chivalrous, but he was also delusional and quite mad.

Woozi: The reason I thought Don Quixote was important for this song was because I don’t want Seventeen to lose their sense of adventure, we want to keep moving forward, and in that respect, we’re a little similar to Don Quixote. Some people might point fingers or criticize us and say, “That’s not the right way, that’s not the right answer,” but I just hope people think, “This is just who they are.”

I love Aristotle’s quote of, “There is no great genius without a touch of madness.” Madness shuns convention and ignores the rules and that’s where creativity blossoms most. Does the idea of bucking against the mainstream resonate or appeal to you?

Woozi: Even more than resonate with what you just said, we want to become that person you described. I think we’re that person. At least that’s what we’re going for all the time.

Vernon: Everyone is unique in their own way. I know how cliché that sounds but I truly believe it. Everyone should really strive to be themselves.

The other track that caught my ear was “Ash” because it’s about breaking free of limitations. What do you see as Seventeen’s constraints?

Woozi: I don’t want to define it as a limitation that Seventeen has to break, but it’s the thought of being satisfied with one’s [fixed] position. We should burn that, turn it to ashes, and move onto a new world.

Vernon: The lyrics remind me of a phoenix, which is why I go like, “Metamorphosis born in fire then I fly away.” And we’re headed to a new world.

Do you know the Keanu Reeves film Constantine?

The scene where he’s walking through Hell, that’s what came to mind when I first heard “Ash”.

You talk about reaching the top, but what do you think the top might look or feel like for Seventeen?

Woozi: Honestly, I don’t think it will feel so much different from now but I think Carats would love it, and when I think of them loving it, I feel very happy.

Joshua: I hope it feels good!

Hoshi: We just want to be the best for Carats.

Seventeen’s Face The Sun is out now via Pledis Entertaintment.