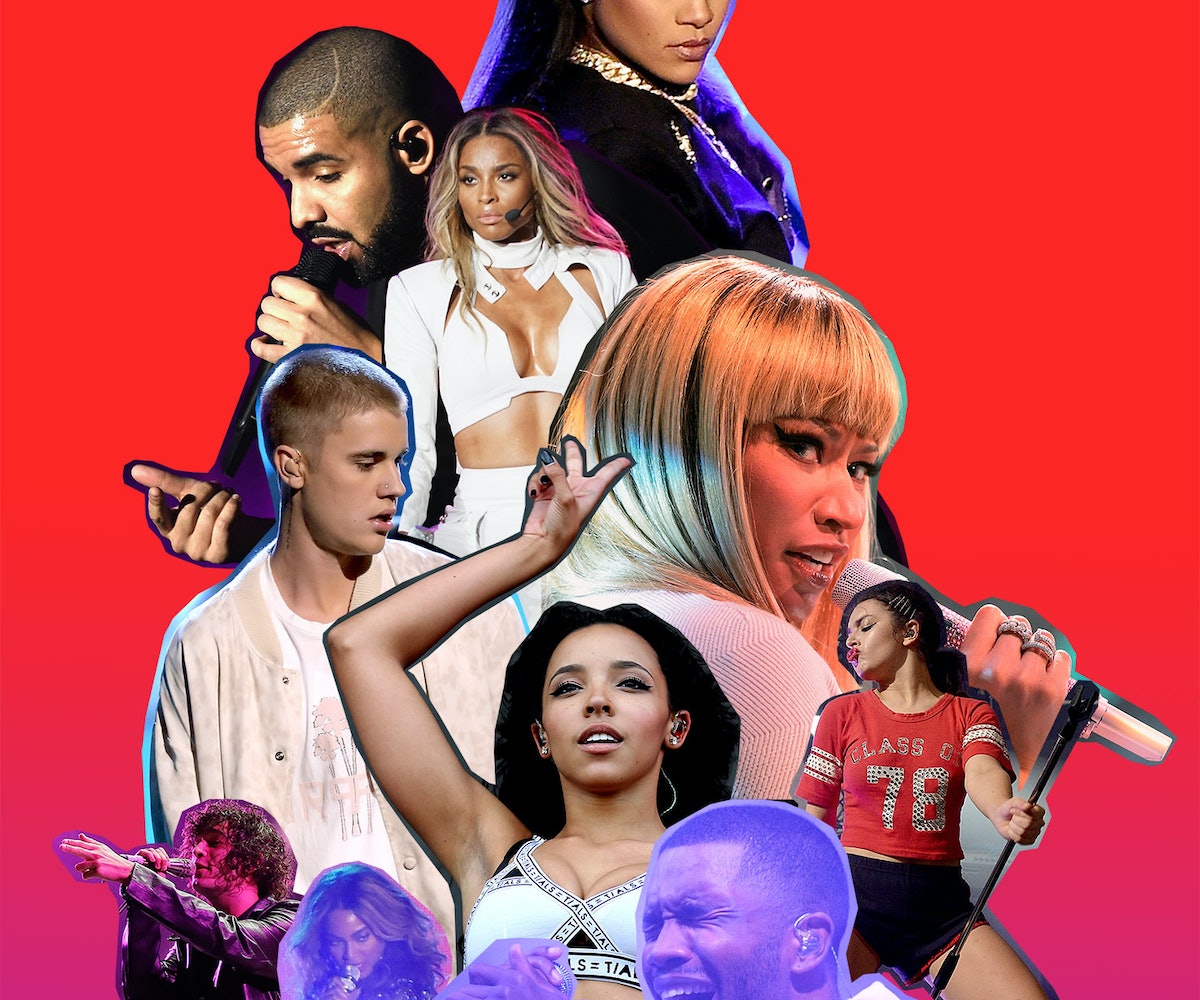 Nothing sets a mood like music. And when you want that mood to scream "sex," you need to find just the right music for the job. Here, then, are our favorite 69 sex songs. They're all over the place genre-wise, from classics to of-the-moment hits, but the one thing they have in common is that they all make us think about s-e-x. So think of this list as the musical equivalent of sex ed: Listen up and get down.

1) "Sex With Me" Rihanna: Rihanna has made a lot of sexy hits, but this one is all about self-empowerment. Lyrics, like "Sex with me so amazing," should tip you off.

2) "Fuck U All The Time" Shlohmo & Jeremih: Anytime, any place, when this song comes on, you will want to get it on. There's no doing an awkward dance so to speak—Jeremih does all the talking for you and gets the message across loud and clear.

3) "How's That" FKA twigs: This is more of a sensual tune about pleasing your lover, but it sets the mood.

4) "Waiting" Alice Boman: The purity of the ache in Boman's voice when she sings "I need you so bad" sends us spinning.

5) "Body Party" Ciara: Your body always belongs to you, but sometimes it's nice to advocate that you're sharing it with consent.

7) "Sex You" Bando Jonez: You can't look anyone in the eye because you'll definitely have sex goggles; this song is a straight aphrodisiac.

8) "Me & U" Cassie: This is a bump 'n' grind classic. Mimic Cassie's moves from the music video and you're in for a sensational night to remember.

9) "Controlla" Drake: When Drake purrs "Go faster, go slower," you can almost feel his hot breath on your ear.

11) "Wall Fuck" Flume: You already know it's on with a title like that.

14) "All Over You" Leisure: It's the slow jams like this that really build the intensity.

16) "Company" Justin Bieber: It just makes sense that someone from Canada would know how to warm us up.

17) "The Way" Kehlani feat. Chance the Rapper: You love every little thing about your boo, and that's cute.

18) "I'm on Fire" Bruce Springsteen: Sure, the fact that he's calling his girlfriend "little girl" and asking if her "daddy" is home is maybe a little creepy, but lots of the best sex has at least a tinge of perversion, and when Bruce howls at the end, well, we break.

21) "Rocket" Beyoncé: This song should make you come, simple as that.

22) "The Wilhelm Scream" James Blake: When two bodies become one.

24) "Flower" Liz Phair: Every time we hear this song, we get all wet between our legs. Love you, Liz.

30) "Coins" Local Natives: This makes us think of summer loving in the heat with the window cracked open because the AC is broken.

31) "Hot Knife" Fiona Apple: We're butter in her hands. And under her blade.

32) "Young and Beautiful" Lana Del Rey: Nothing is hotter than begging God to be able to bring your boyfriend into heaven with you. Is there sex in the afterlife? For Lana, definitely.

33) "All of Me Wants All of You" Sufjan Stevens: This is the type of sex where you smoke a cig right after, and he doesn't call you back right away because he's a really bad texter. It's still sex, though. So that's cool.

34) "Mary" Alex G: Someone on Twitter described this as a song that would be playing while a stripper is performing and now we can't unsee the image when we hear this song. But that's pretty hot.

35) "Once More To See You" Mitski: The type of person we basically dream to get it on with and who we'd do anything for to please.

36) "Independent" Lil Boosie and Lil Phat: This song always reminds me of sex because back when I was young and impressionable, a friend told me the secret to giving a good hand job is to sing this song's chorus to yourself to keep rhythm. It's also empowering, so that's nice.

37) "Chained and Bound" Otis Redding: Even one second, one mere vibration, of Redding's voice in our ears and it's over.

39) "Who's Your Daddy?" Benny Benassi: The title of the song should say it all, but this song has the ability to make a Good Girl Gone Bad™ go bad all over again.

40) "How Many Licks" Lil' Kim feat. SISQO: Sure, the lyrics are forbiddenly filthy, but can we talk about that whiny synth? That sound is pure, carnal debauchery.

41) "Untitled" D'Angelo: We mean... this is one of the only songs where we don't even need to hear it, just watch the video, to feel pretty good. But the song is super hot too.

42) "Gone" The Weeknd: Any song from The Weeknd's original trilogy (before it was remastered for Republic Records) could fit here, but "Gone" is an inebriated eight-minute freestyle over a melodic narrative that ranges from sensual and woozy to fiercely determined, only to end in a blurry comedown.

43) "Ooh La La" Goldfrapp: This is a song made for foreplay: alluring and completely intoxicating.

44) "Filthy/Gorgeous (Extended Version)" Scissor Sisters: You want a song that'll make you own your sex? Here it is.

45) "Space Boots" Miley Cyrus: Fun Fact: Miley Cyrus' surprise, non-record label album, Miley Cyrus and Her Dead Petz, is a fabulous sex album. The content isn't exactly tantalizing, but the vibes are all there. This song, however, brings both together wonderfully.

48) "The Safety Dance" Men Without Hats: It's weird; we don't understand it (neither does anyone to whom we've told this), but it just is sexy. We regret nothing.

49) "Freedom" by George Michael: Because freedom is sexy.

50) "Pink Matter" Frank Ocean: If you're the type to get turned on by a clever metaphor, the parallel between a vagina and a Dragon Ball Z character in this song is sure to do the trick.

51) "Let's Talk About Sex" Salt-N-Pepa: Besides the obvious connection here, Salt-N-Pepa's willingness to openly discuss a topic that was so taboo at the time just makes you want to have super-safe, super-consensual sex.

52) "I Like" Jeremih feat. Ludacris: Listen to the beat alone and just try not to do a striptease, we dare you.

53) "Too Deep" dvsn: When dvsn perform live, their backup singers wear church choir robes, which makes this song's double entendres, such as "I just want to go down... in history," feel all types of wrong, but somehow even sexier.

54) "No Sleep" Janet Jackson (and basically every song off of her eponymous album and Velvet Rope): Janet Jackson could sing Donald Trump's tweets, and we'd still think of sex.

55) "My Neck, My Back" Khia: For years I thought this song was about a really intense workout. The truth, as explained to me by the boys in my fifth-grade class, changed my life.

56) "Some Cut" Trillville: There's a squeaking mattress in the background of this song, and it's not an allusion to "Five Little Monkeys Jumping on the Bed."

57) "Rich $ex" Future: The only intelligible words in this song are "rich sex," so how could you not think about getting it in on pay day?

58) "O" Omarion: This list wouldn't be complete without a member of a boy band who went solo and proved how mature he was by singing about sex to his fanbase of teenage girls.

59) "That's What It's Made For" Usher: You'd think writing a song about very freaky, very safe sex would be challenging, but Usher makes it seem so easy.

60) "Let's Get It On" Marvin Gaye: If there was a Hall of Fame for songs that made you think about sex, this would be the first inductee.

62) "Side to Side" Ariana Grande: We're not sure if our mind is perpetually in the gutter, but we thought this was about "getting railed so hard you can't walk" before Lena Dunham tweeted about it.

63) "Get Me Home" Foxy Brown: The juxtaposition of Foxy's forceful Brooklyn accent and her lyrics about being submissive in the second verse is perfect for those of us who pretend to be thugs in the streets, but don't mind being ordered around in the sheets.

64) "Say It" Ne-Yo: Having grown up in the era where male R&B stars started to focus on their own desires, it was refreshing to hear from a guy who didn't mind treating his lover (even though we wouldn't really know what that meant for another couple of years).

65) "Pony" Ginuwine: Literally every party we went to in college ended with this song, a not-so subtle suggestion for after-party activities...

66) "Lollipop" Lil Wayne: Point blank, we didn't know what head was until we heard this song, so, yes, rap music was our equivalent of Sex Ed.

67) "Hands to Myself" Selena Gomez: We're not the only one who thought this was about touching yourself, right? (Right???)

68) "Coffee" Miguel: In the uncensored version, Miguel makes "coffee" sound like "fucking;" arguably the most genius subliminal message to ever grace an R&B record.

69) "Splash Waterfalls" Ludacris: Much like "My Neck, My Back," our male classmates taught us the true meaning of this song. Even more life-changing.

This article was originally published on Oct. 7, 2016