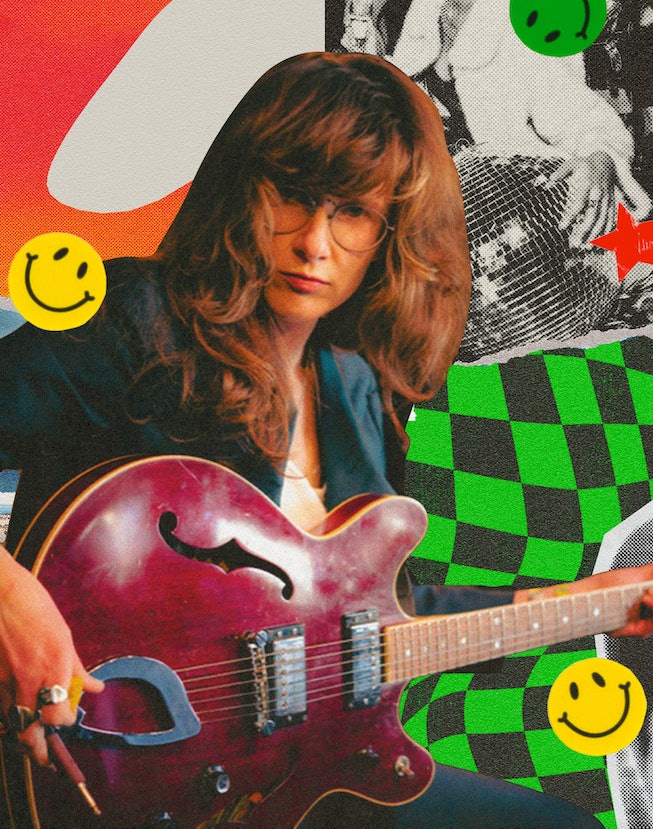 There’s no one way of coming out. In that spirit for Pride 2022, NYLON asked six queer musicians to share their coming out stories. Below, queer indie rocker S.G. Goodman describes what it was like coming out as gay to her rural, Southern Baptist community.

I think it’s safe to say that as a queer person, you are continuously coming out in some capacity. Maybe you start by acknowledging it to yourself and those close to you, but then there are your co-workers, doctors, random people in administration, etc. Our stories look different from person to person, but the reality is that no matter to whom or in what way we make our truth known, for me it seems to be a continuous act.

By the time I signed my first record deal, I had disclosed my queerness to everyone I felt it meaningful to tell. I had no problem including that detail about myself publicly. It was 2020, and by that time there were countless artist who were outspoken about being gay.

Billboard announced the news of my album deal and debut album, and with that included my queerness and story, being from a Southern Baptist community in the rural south. What I was hoping for was acknowledgement and encouragement from my community — which I did receive some of — but not without a deluge of “I’m praying for you” messages in my inbox. No matter my accomplishments, to some I wouldn’t be enough.

In the months that followed, both the negative response and positive response called for me to interrogate how being out publicly was settling in my body. The body stores our experience, and I speak to this in my new song “Keeper of the Time” from my new album Teethmarks. It’s a bookend to an earlier song from my first album “Space and Time,” which is about the negative response from my community bringing me to a place of pure desperation and hopelessness.

I come from a place where there were not “out” queer people who held roles or occupations that were respected by the community around me. Like many, when I was growing up, my only examples of queer people were on TV, and on programs I wasn’t even allowed to watch. To an extent, I understood the ignorance I faced from community members surrounding my sexuality, because I understood the full context of their beliefs: I was an insider, myself. When the sermons you hear on Sunday morning stress the otherness of queer people, you don’t stand a chance not internalizing those beliefs. The church was the biggest social event of our week, and it served as the moral compass for the majority of our community.

There were two interesting things at play in the process of me coming out: the lack of real-life role models as a queer woman, and the fact that those around me had no examples of being close to one. I’m not saying there were no gay people in my community growing up, because there were definitely murmurs of them. It was an unspoken expectation that those who were rumored to be gay should live quietly about it, and more loudly spoken was the expectation that you didn’t want to be found suspect of being gay.

But despite the dissonance of my background and my identity, I eventually felt I had found enough peace to sustain me and be strong with myself, even with the folks who took issue with me being queer. Through therapy and with the support of my chosen family I believed I had established a foundation where old hurts had been worked through.

Coming out in the religious south was one thing, and I’ve met a few folks with aligning stories to my own. But there has also been the coming out process within the gay community. I still live near where I grew up, and on any given occasion, the majority of my friends are straight. The geographic isolation of living in a rural community for me has meant I don’t have and have never had a large group of gay friends. So as you can imagine, the conversations I have daily don’t typically revolve around me being gay. At times when I try to talk about these things with queer people from other backgrounds, the response is often that I haven’t arrived to some level of queerness that they have. The way I conduct myself as a queer woman has been mirrored back by some as not acting queer enough.

It’s true I’ve never been to a Pride parade. I don’t particularly like parades. It’s true I don’t wear rainbows. I think rainbows are pretty gaudy. I don’t talk about my relationships much publicly because I like to keep my personal life as private as I can. The complexity I’ve found in my continuous coming out saga has been found along the line of being either too loud or too quiet for some.

But ultimately, I have found that the details of my experience of coming out are not as important as how I am processing them. I alone carry the weight of that process. I can’t rely on the acceptance from any one group of people about what it is continuing to mean for me, the one who carries it. In my new record, I explore love and the marks it leaves behind. Either good or bad. Were you loved enough? Were you in love? Was it unrequited love? How does that hurt and how does it help? In exploring these concepts and sometimes traumas, I hope it can create a space for people to explore their own feelings, and find comfort and peace in their process, even if it is on-going.