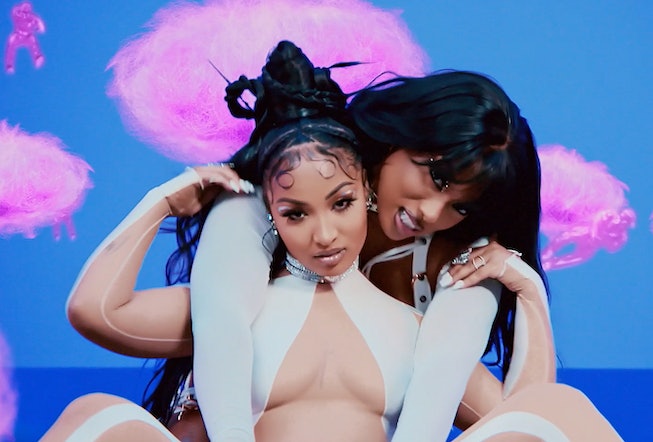 Shenseea has already made her mark on the Jamaican dance hall scene, and now the 25-year-old artist is ready to be heard all over the world with her new single, “Lick,” featuring none other than Megan Thee Stallion.

“‘Alpha’ means strength and leader to me,” Shenseea told NYLON. “That’s how I think of myself, as an alpha. I’m always in charge, I’m always looking out for my family, my crew. Not dependent on anybody, which is what my whole movement is about. Telling women to be independent and to lead. That’s my whole personality. I don’t need a man to do whatever.”

That sensibility is clear in the playfully trippy “Lick” video, which is an ode to exactly what the title implies, filled with women dancing on ice cream cones and Shenseea and Meg joyfully feeling themselves. It’s a video that Shenseea helped direct herself, infusing it with her own sense of creativity. “It was fun, making the video, as I helped to direct it,” she said. “I came up with ideas making Megan look like a giant. She’s really fun, she’s really supportive. As soon as I sent her the song, she hopped on it in a matter of weeks. She’d been showing me love from way before. She’s genuine towards me. And she’s a hard worker too. She works really hard. I love that. And we shot the video on my birthday.”

Even without a full album out yet, Shenseea has already amassed a huge fan base from singles like “Run Run” and “Be Good.” Shenseea is aware of the affect her messaging has on fans, and is proud to be an example of self-love and fearlessness.

“[The fan reaction] feels good because the majority of them don’t get good lessons growing up,” she said. “So I become an advocate, teaching them what I’ve learned, and what has been working for me growing up. What made me the woman I am, what made me so strong now. The types of principles and values that I have, I share with them. So it’s good because for them to react, that means they’re listening, and that’s all that matters to me.”

Though it’s already been a huge couple of years for Shenseea — in the past year, she was featured on two songs off Kanye West’s DONDA, in addition to playing her first ever US festivals — the artist is already at work on her next album.

Watch the video for “Lick” below, and keep an eye out for ALPHA, out March 11th via Interscope.