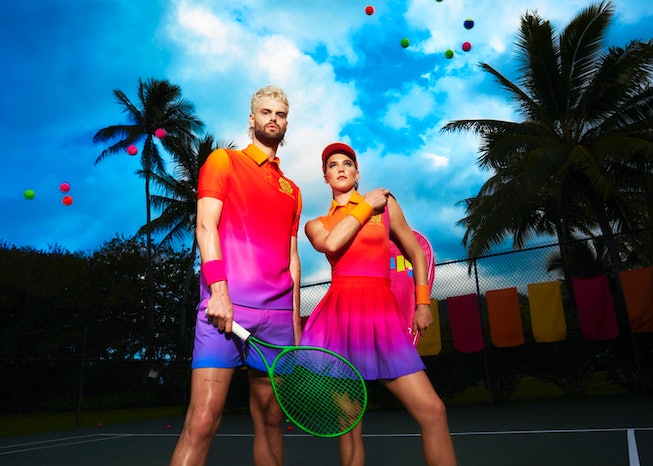 Sofi Tukker, the electronic-pop group featuring Sophie Hawley-Weld and Tucker Halpern, just wants to have fun. Their new album WET TENNIS — which stands for “when everyone tries to evolve, nothing negative is safe” — is an exploration of joy, crafted during the height of the pandemic. According to the duo, they were inspired to release new music after their fans, the self-titled “Freak Fam,” made a weekly virtual-meeting to connect with each other.

“These people would show up every day at 1:00 P.M. and dance, dress up, and feel really joyful for 30 minutes; amidst what was for many of them, the most isolating, lonely, and challenging time of life,” Hawley-Weld tells me one afternoon. “We were so inspired by the choice to stay optimistic, to stay joyful and positive.”

WET TENNIS is the high-energy sequel to their debut record TREEHOUSE. In the four years since its release, Sofi Tukker has spent most of their time together, creating music and bouncing ideas back and forth as they honed their sound. “We live the exact same life as each other,” Halpern says. “We’re always together.”

As Halpern and Hawley-Weld talk about their new album over Zoom, the duo’s connection is evident. If they hadn’t told me their origin story — an unexpected meet-cute set in an art gallery near Brown University — I would guess they were siblings. Throughout our conversation they finish each other's sentences, debate, circle back, and correct one another until they manage to get their point across. It’s as if they share a brain.

“We want it to be,” Halpern begins, eager to explain the record's vibe, “playful,” Hawley-Weld interjects. “Light, fun, playful, and you know, wet,” he continues. “And sexy,” she concludes as he nods in agreement. The record aptly meets that description throughout its twelve-track run. From the groovy beat in their single, “Original Sin,” to the whispered drawls heard in “Freak,” WET TENNIS is a well-deserved escape from reality.

WET TENNIS will be released on April 29. Sofi Tukker will be hitting the Live Stage at Ultra Music Festival in Miami on Saturday, March 26 — their debut at the festival — and is currently planning a tour to experience the music on a wider scale with their fans. In the meantime, the duo caught up with NYLON to chat about the makings of the album, their creative process, and secret music vault, below.

This interview has been condensed and edited for clarity

How do you think you’ve evolved over the past four years?

Halpern: Our first EP was called Soft Animals. We wrote our first song “Drinkee,” part of it while we were still at Brown, and then we graduated, moved to New York, and that whole EP was us figuring out how to make music. We were learning how to literally use the studio. We were figuring out what we wanted to sound like, and who we were. It was a process of learning as we go, trying to understand who we are as we were building it. Now I feel like we understand a lot more [about] who we are and we have something really specific that we want to say. That's a big difference. Aesthetically, we're more sure of ourselves. Personally, we're more sure of ourselves.

Sophie Hawley-Weld: I know we'll look back five years from now and be like, "Wow, look how far we've come.” I think we've become better writers, better producers, better humans. I think all of that is reflected in the music.

We really made the music on purpose, because we were envisioning the live show as we were writing it. We would think, "Oh, it would be really cool in the show to have a guitar solo here, [or] a call and response moment here." That's where that album came from. Whereas this album was written by and large during the pandemic. We weren't thinking about performing it live, we were just thinking about making the best music we could, and also expressing a lot of the things that were within us. There's some songs that are more dramatic and introspective on this album. And then there are also songs that are like closing our eyes and trying to envision a future and a life that has nothing to do with our present moment.

It's almost like manifesting music. We were just, even in the pandemic, dreaming about what life could be like and where we would want to be and the state that we'd want to be in. That's very much where a lot of this came from. Creating this world, which is the world of Wet Tennis, that is super bright, colorful, playful — all of the things that we really were missing.

Are you inspired by similar artists?

Halpern: I think what's sort of interesting about us, especially when we were starting out and figuring out who we were, is how different we were, and are, especially with our influences in our backgrounds. Sophie didn't know anything about dance music, and I literally didn't know anything about jazz or Bossa Nova. The references she would pull up and the references I would pull up were things we'd never heard before.

Why do you think your fans enjoy your music?

Halpern: We know who listens to our music.

Hawley-Weld: Yeah now we do now.

Hawley-Weld: But there's also times where you meet people who say, "Hey, I really resonate with your music." And it's a surprise, or you don’t expect for that person to necessarily resonate. I like to think that energy is something that can be transferred through music, and that energy attracts energy. So people who are looking to feel this optimistic, joyful, bright, colorful ... will naturally be drawn to it because that's the place that we're coming from.

Halpern: We definitely get a ton of people when they are pre-gaming before they go out, or they're dancing at home with their friends, or they're in a workout class, or they're just at a lot of fun-gathering moments. I think it's nice that our music brings people together.

How do your creative processes differ?

Hawley-Weld: Oh, my God, it's so different. Our rules are really different.

Halpern: But different in a complementary way.

Hawley-Weld: Basically Tucker has this style of creating which I really admire and love, which is — show up every day and create. Whereas I am a lot more in the camp of, when I feel it move through me, I create. I think that I could end up creating a lot less if I wasn't in a band with Tucker because he is constantly doing it.

How does that play out in the studio? What does a work day look like for you?

Halpern: Most of the songs we've made were kind of different processes, I would say.

Hawley-Weld: I have a great example. So this song “Forgive Me,” that's coming out on Friday. We basically made it, and we were like, "Okay, we're [just] going to work." We met up with some friends and I got a phone call that was extremely hard to receive and very dramatic. I was a mess and I was like, "Guys, I'm not ready. I'm sorry. I'm not okay."

Hawley-Weld: He was like, "What the fuck you talking about?

Halpern: You use that shit.

Hawley-Weld: So I was like, "Well, I don't want to write about this. This doesn't feel joyful. This doesn't feel happy. This doesn't feel like a side I want to put in the world. I'm suffering right now." And he was like, "Write." So, I sat down and wrote the first verse to “Forgive Me.” I'll never forget the moment because it was super cathartic to move through this thing and turn it from something that was really challenging, into something that was externalized. I think had it not been for Tucker, there's no way that I would've channeled that moment. I think I would've figured out how to process it in another way.

How do you choose which songs you want to release as singles?

Halpern: Sometimes we'll write a song and you'll just know immediately — “I want everyone to hear this. I want to put all our resources behind this one.” Then other songs we're like, "This completely tells the story of what we want this album to be.” When we’re thinking about the whole project overall, we really want it to say something. We want it to feel a certain way, we want it to flow. Everything is kind of just a conversation of what feels good.

Hawley-Weld: As an example, [the song] “Forgive Me.” We decided not to include that many songs on the album that felt dramatic and emotional because we really wanted to put out an album that felt optimistic. And so, as we listened through, we had plenty of songs that we did not choose to put on the album.

Halpern: Some are probably the best songs.

Hawley-Weld: We really loved them, but as a collective, they brought us down. So, we had to really think about all the songs and how they would fit together. If we're going to play a song like “Forgive Me,” the song that comes right after has to have a more hopeful tone. Not that “Forgive Me” isn't hopeful, but it's definitely one of the more emotional, dramatic songs.

Halpern: I think also that in a lot of dance music — and we're not really just making dance music, but we are coming from that world — it's very specific what type of sub-genre is popular at that time. So a song you write three years ago usually can't come out three years later, because the sounds, and the genre, and the synths that everyone's using are totally different than they were. It's always been really important for us to not care about that stuff and just make stuff that we love.

Are you ever going to release the songs you chose not to include?

Halpern: That happens a lot.

Hawley-Weld: We've even taken the lyrics and not the melody and repurposed it into a different song. There's so many possibilities.

Halpern: We'll just be working on a new song or maybe even a collab or something in a studio. And while going through our old songs for inspiration, we’ll grab parts of it and put it into a new song, and then it feels even better. It's kind of nice to have those, actually. We always have a bank, like if we're ever working on something and Sophie's like, "Let me see what I got here." And she'll go through a list of our songs that we haven't released and maybe even just start singing them over the track in her head. Sometimes the best shit comes like that.

Hawley-Weld: That's how “Purple Hat” was actually. That was a song that we made a long time ago.

Halpern: It was originally a super fast techno song

Hawley-Weld: We always loved that part.

Halpern: We remade it at 94 bpm, and it's like a funky thing, and it worked way better, and took us two years or a year of sitting on it to give it a shot.

How do you plan to celebrate once WET TENNIS is out?

Hawley-Weld: We’ll have it on play every day for the rest of our lives.