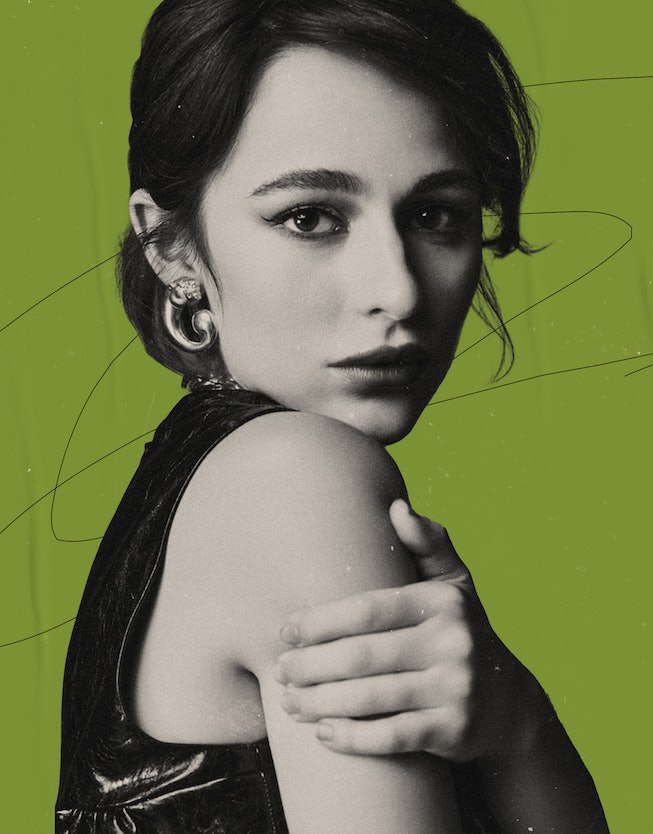 On any given day, you might not be able to recognize Sophia Anne Caruso. Her hair may be a shaggy bleached blonde or sleek brunette. She may be dressed in vintage lingerie she’s reworked herself or some old men’s overalls, also probably vintage. When we meet over lunch at a vegan restaurant near Times Square on a recent afternoon, she’s a deep auburn redhead, dressed in a loose plum shirt dress. She almost wore vintage bloomers, she notes, but she’s in all day rehearsals and comfort is key for long days like this.

Caruso is something of a creative chameleon all around. A theater performer from an early age, the now 21-year-old got her big break in 2017 when she originated the role of Lydia Deetz in Beetlejuice the musical, which saw her headlining Broadway for just under a year when she left the production to focus on other areas of her career. Currently, that includes painting, poetry, photography, a starring role in Netflix’s upcoming blockbuster, The School for Good and Evil, co-starring Charlize Theron and Kerry Washington, and also releasing solo music, just for good measure.

Today, she is dropping her latest single, “Thing Like That,” premiering exclusively on NYLON, a bubbly, nostalgic track that joins the multi-hyphenates steadily growing catalogue of songs that, like Caruso, defies easy categorization.

Here, she breaks down the song, talks entering Netflix’s new fantasy world, and what could possibly come next.

First of all, tell me about the song and it’s sound. It reminds me of a very specific, breezy time in indie, circa Chairlift and She & Him.

That's exactly what it is. My co-writer Nick Littlemore’s band [Empire of the Sun] was super popular during that time. It's different from other stuff that I've put out. And then I think it's a different vibe. It's meant to feel like more pop than the other stuff, but still not quite pop. It's been sitting in Dropbox for years now. I'll write stuff, and then it sits there until I'm ready to finish it. It'll be half finished, but not mix the master. I'll be like, "I’m just not ready to pull you out."

How do you eventually decide when a song is ready?

I wanted to put out another song And I want to tour. This is such a summery song, but I don't want to wait ‘til next summer to put this out. I was inspired to pull it out again because I had a similar situation to when I wrote it.

What type of situation is that, and how does it play into the song?

It's told from this perspective of a child, and that's why it has that shouting section. It feels like a temper tantrum. In a childlike sense, it's about shitty friends. And then, she says, "My heart is in your hands. And why'd you do a thing like that?"

It was really fun because I always want to scream sing, and in the music I don't really write that kind of stuff for myself. But in shows, I've done that, and I just was like, "I want to have a temper tantrum." And so we decided that there was just going to be a breakdown, and I sang it. It's 10, 15 takes layered on top of each other, SO it sounds like a bunch of kids yelling. But it's meant to be upbeat and happy too. It's not just a pouting song. I say that any song that you can punch the air to has the recipe of pop songs.

My thing with albums is that every song I have is so different. I have enough stuff to release an album or more, but it's just every song is so different, and I feel albums tell an overall story, to me, or a lot of really great songs on albums get lost in the mix. Whereas, just dropping stuff individually, we can linger for a while. Everything means something else, so it doesn't need to be clumped together.

Do you feel more of a pressure to define who you are, personally, as a musician, since you are known from musical theater?

A little bit. I don't like the idea of limiting myself to one style. I feel like a lot of pop singers all sound the same. All of it all sounds the same. They use the same recipe, or they take somebody else's song, and they just rearrange the lyrics. I can make pop music. I can make rock music. I can make any music. . I can sing pretty. I can sing ugly. If I wanted to label myself as one sound, I would drop an album, but now I'm just doing whatever I want.

What musicians do you find yourself returning to over and over again?

I have an infinite fascination with Bjork. There's also a band called Life Without Buildings that I love. They dropped one album from 2000, I think, and that's all you ever heard of them. They're a little bit obscure but so good. It's a punk girl band. Everything's spoken and weird. I love that. The Sugarcubes, I love. Tori Amos and Fiona Apple.

How are you managing both rehearsals and your own music, plus now promo for the new movie? Is that beginning to ramp up?

When did you first audition and then film?

We filmed last year, for four and a half months in Ireland. It was amazing. All the young cast was in the same hotel, which is like a castle on a hill. It really felt like we were living in the world [of the film].

Before that, [director] Paul Fieg had seen me in my show on Broadway. He wanted to meet me, so my manager set up a sort of general meeting where we were going to talk about the kind of stuff we want to do and experience, whatever type of work I want to do. And I was like, "So what you got? Do you have anything that would be a good fit, that we can do together?" And he was like, “actually yeah.” So I made a tape. I actually originally auditioned for Agatha (played now by Sofia Wylie) and then obviously I ended up as Sophie.

How was then actually shooting with him?

Paul just knows how to talk to actors. I completely trusted him. There was never a moment where I was like, “Hmm, I’m not sure how this is going to turn out.” He always has a positive attitude — and in a three-piece suit. Even during night shoots, when we're in a swamp. He was wearing his three-piece suit and a Rolex and got in the water. And I was like, "Don't get it wet!” And he’s just like, "No, it's waterproof."

Meanwhile, you’re in a full corset.

A lot of corsets. So many that when I was watching the film I was like, “I don’t even remember wearing that one.” But I got to keep one of them.

Have you worn it since?

Oh, yeah. I also let my friend borrow it.Her top broke and we were going to the re-opening of Slave Play, and I was like, "Just wear my corset.

Oh no. I treasure the corset. The corset's not going to a dive bar.

For your first major film, this movie is huge and you are one of the co-leads — did the experience live up to what you hoped for?

I love making films. It's my favorite. I love doing plays. I love to paint. I love poetry. I'm always up to something, but I love making movies. That's my main thing.

NEXT UP
Culture
Jeremy Allen White Has At Least Four A24 Scripts on His Desk
Culture
Aubrey Plaza Directorial Plans Involve Filling The “Female Tim Burton Spot”
Entertainment
Precious Pepala Is Going From TikTok Covers To Her Own Resonant Songs
The Art Issue 2022
Instagram Didn’t Kill Party Photography. It Just Made It Evolve.