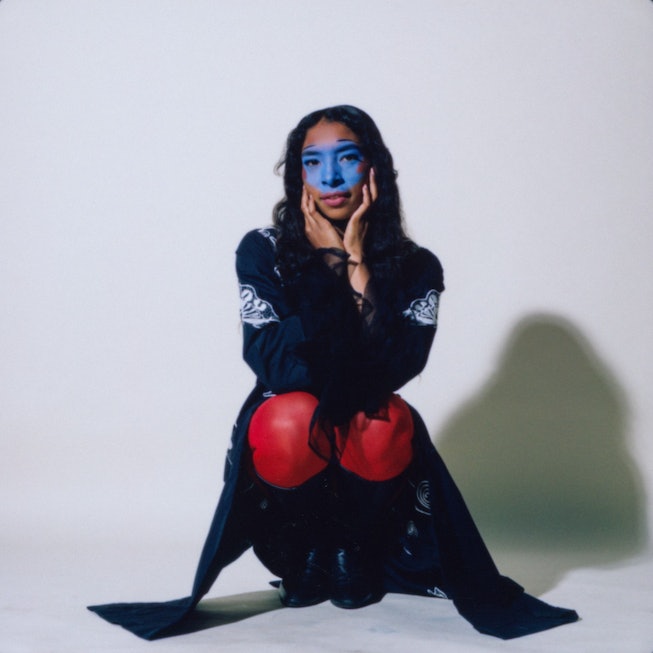 On her latest single, Bay Area artist Spellling sings about being in a state of “permanent revolution.” While this might initially sound like a perilous task for the mind and body, she presents the idea, this “fire that never goes out,” as a necessity for feeling whole in a world that exploits you. “What a wheeling feeling/ When I’m complete/ I think I found my way around/ This mortal coil,” she sings wondrously on “Revolution,” the show-stopping piano ballad whose new accompanying visual premieres on NYLON below.

The song is off of Spellling’s — real name Chrystia Cabral — latest studio album The Turning Wheel, a 12-track collection of theatrical fantasy and sweeping orchestral arrangements, paired with urgent modern messaging, like the one above. It’s Cabral’s third album and her most ambitious yet, as she recruited 31 collaborating musicians to help bring the entire project to life.

In the video for “Revolution,” Cabral puts on a stage production starring an old and wise bard, who spins her lyrics about a “permanent revolution” into a story to be passed down through generations.

Spellling writes of the song in a moving email statement: “The song ‘Revolution’ is about the struggle to feel whole and to find a nirvanic place of ‘completion’ while fighting against, and living day-to-day within, a matrix of exploitation. I sing about falling complicit to the grim false narrative of ‘growing up,’ becoming a body that lives to labor… as an exhaustive submission that is wearing me down... but that there is still a spark of passion... to resist and reignite.

“The ‘permanent revolution’ I sing about is this idea that the yearning will never die, it will only grow more powerful within us all — for a world in which our greater virtues are encouraged and nourished — this desire is deep within us and this desire will never die out!”

Watch “Revolution” below and listen to The Turning Wheel now.