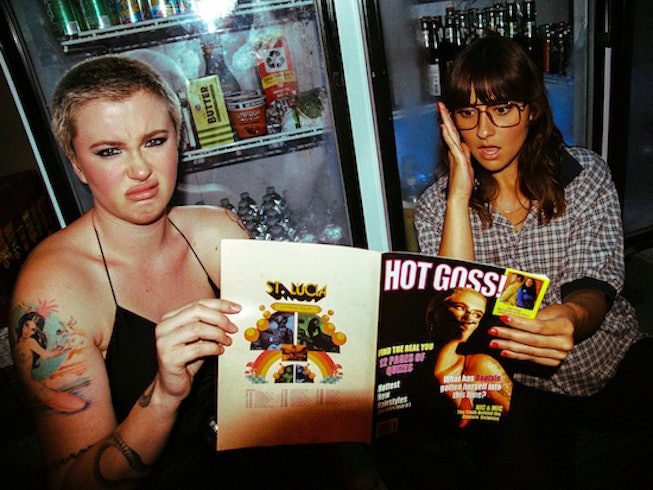 In the Nicole Lipp-directed video for St. Lucia’s “Gimme The Night,” model Ireland Basinger Baldwin takes refuge from hounding paparazzi by barricading herself in a convenience store. She and the store clerk (played by Jetta Juriansz) become friends, drinking, and dancing in the back aisles before the paps eventually join in the fun.

“Gimme The Night” is the fourth single off St. Lucia’s long-awaited fourth studio album, Utopia, now on streaming platform via Nettwerk. The video is “a poignant message wrapped up in something seemingly not so poignant,” Jean-Philip Grobler, one half of the synth pop’s husband-and-wife duo, says. “Here we have a parable of fame and how it’s not all it’s cracked up to be, with the role of the young starlet being played by our good friend, Ireland Basinger Baldwin, who, due to her celebrity status, is well accustomed to this song's message.”

The song features St. Lucia’s signature sound, combining disco, 70s funk and 80s pop for a genre-defying, highly-danceable record. “Our vision for ‘Utopia,’ that only emerged as we were working on it, was to make an album that was the antidote to the last few crazy years, while also acknowledging what we collectively went through,” Jean-Philip says. “We could have just made a sad record. We could have pretended we were happy the whole time. But both of those would’ve been a lie. What we went through was one of the most extreme periods of our lives: extreme isolation, extreme intimacy, extreme sadness and, at times, moments of extreme elation and joy when reunited with loved ones. We needed to somehow process the ambiguity of that experience, and the making of ‘Utopia’ was our therapist.”

“Gimme The Night” captures that complex dichotomy, with shimmering vocals gliding over upbeat synths with lyrics that reflect the urgent desire for escape. “Lyrically, ‘Gimme The Night’ is a tongue-in-cheek commentary on the lifestyle of influencer culture, which we lived at different points,” Jean-Philip adds. “Being in a band, you’re flying all over the place. Everyone thinks it’s a totally glamorous life on social media. It’s glamorous sometimes, but most of the time, it’s not the jet-set life you imagine.”

Watch the video premiere for “Gimme The Night,” below: