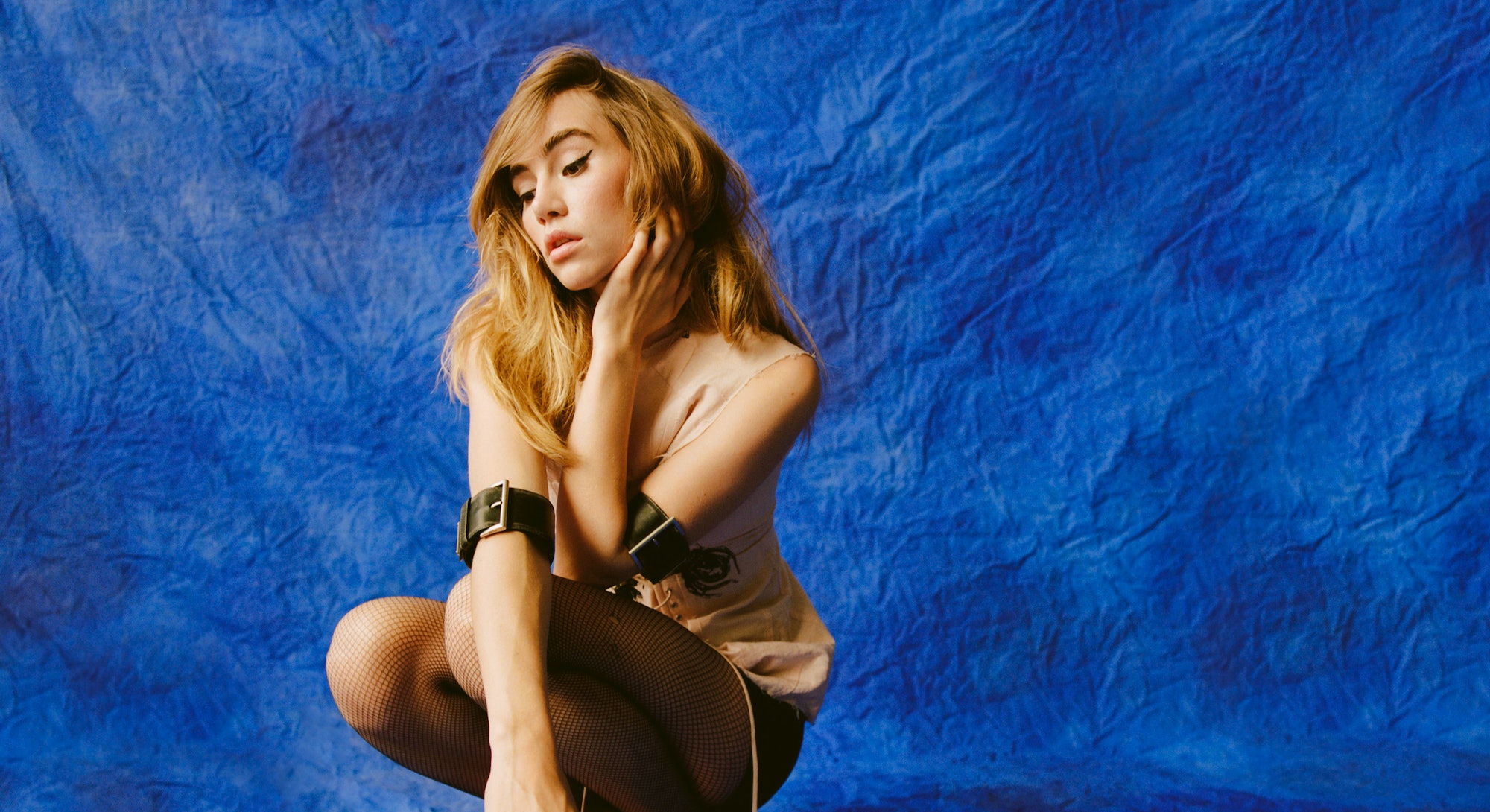 Suki Waterhouse has a knack for meeting people on the street. It’s not something she seeks out, but a testament to some kind unspoken magnetism that surrounds her. When you’re near her, you can’t help but believe in serendipity.

She recounts how a week ago — just days before the release of her debut album, I Can’t Let Go — she was in New Orleans, wrapping filming on the upcoming television series Daisy Jones & the Six, when she discovered Lucinda Williams, whom she had been listening to while recording her own album, was in town. She went to her show, where she randomly befriended one of the tour roadies — “I know, I’m such a groupie” — and next thing you know, she’s backstage, meeting one of her idols. “She was incredible,” Waterhouse says now. “I didn’t want to annoy her too much, but it was just nice to get to say a couple of things. But it was so strange. I’ve just been talking about her so much and then I got to see her.”

Just a few days later, sitting outside of a café in Bushwick where she’ll perform two headlining shows at the nearby Elsewhere over the next few days, Waterhouse is put in the reverse role. The groupie becomes the idol. “I’m sorry to be a big dork, but I’m such a big fan,” says our waitress, a woman in her early 20s who plays it very cool, as she sets down our tea. “You are playing around here this week, right? I wanted to go but it sold out.” Waterhouse beams up from under her shaggy bangs. “Should I try and put you on the list? Write your name down.” The waitress retreats inside to grab a slip of paper and a pen. When she returns, she’s also armed with a to-go bag with a slice of homemade cake. Waterhouse is genuinely touched. “That’s so nice, that cake is so cute,” she responds. “OK, I’m taking your name down and I want to see you there singing.”

“This has been my favorite thing to do at the moment,” Waterhouse says with a grin. “Then [the venue] is like, ‘No, you have so many people there. This is a fire hazard.’ But, I’m sorry. That’s who I want at my shows.”

The release of I Can’t Let Go could be chalked up to serendipity, as well. Waterhouse blames it on fear. Maybe it was a little bit of both.

Waterhouse, now 30, first rose to fame as a model when she was discovered in London at the age of 16. She’s been writing music for just as long, steadily releasing a series of singles since 2016. Putting out an entire album, however, was never a foregone conclusion. “It’s not like I had any labels coming to me or a manager or anything,” she says. “It’s not like anyone’s going, ‘Yes, you must.’”

Over the years, Waterhouse would work on music with people she’d meet, “always in super random ways.” An example? “My friend told me to go... well, it wasn’t even a friend. It was someone that I’d met a couple of times. Maybe once. But he told me to go write with this chef in Montreal. I would go and do stuff like that all the time.” She enjoyed the writing sessions, but struggled with finding the right producer and how to home in on a sound of her own. “I was weirdly quite afraid of production in a way,” she says. “I kind of wanted them to be like a GarageBand sound, like Karen O’s Crush Songs, where it sounds unspoiled.” Part of it, she reflects now, was also preemptive self-protection — by going the lo-fi route, she could never be blamed for trying too hard. “I was so nervous about this whole thing of what would people think about me doing music that I thought it shouldn’t sound produced,” she says. “It shouldn’t be too ‘musical.’”

Over the course of the pandemic, she found herself drawn to two bands in particular that balanced that raw, emotional sound while still sounding polished, Waxahatchee and His Golden Messenger — both of whom use producer Brad Cook. As luck would have it, her friend and mentor, TV on the Radio’s Dave Sitek, had just worked with him. “I got him to help vouch for me,” she says. “The next thing I knew, I was on the plane, going to North Carolina to meet Brad. It was such an extreme thing to do. We hadn’t tried out anything. It’s not like we were even sharing playlists. I’m just like, ‘Oh, I hate doing that.’ And he’s like, ‘I hate doing that, too.’” It was kismet.

It was crucial that Waterhouse find someone she trusted deeply with her music, as everything in it, she says, is “autobiographical.” “It’s like the only thing I have in my life that’s completely mine and my creation,” she says. For her, songwriting is a way to help process her feelings and reexamine certain situations. A majority of the songs on the album were written in her early 20s. “I want to be able to actually listen to my own song and go back and feel who I used to be, because they’re memories,” she explains. “I get so terrified of forgetting places and people and what life was like at a certain time… And also, eventually, you get perception. I think a lot of the time, when I was writing stuff, even if it was a long time after I’d broken up with somebody, I was kind of annoyed with myself about how long it took me to let go of things. Some of the songs, I was very, very close to the emotion of it. You don’t know how you are from day to day, and you’re trying to find the words to explain what you’re feeling. And that’s how I kind of approach the songs — it’s like trying to find the words.”

There’s strength in the passing of time that comes with songs — years later, they can take you right back to a certain time or feeling, but you also have the knowledge of what has come since. “I can tell in my songs how long I’ve had between the feelings,” Waterhouse says. “I can still muster a lot of disdain on stage, certainly. There definitely is this effect that once you have something tangible outside of yourself, that then I can look at the song or feel it outside and perform it. But then, especially as I get a little bit older, I can see a little less inside it and I can be a bit more like, ‘No, that person is completely fucked up and they’re gross. I shouldn’t have been anywhere near them.’”

On the day of her album release, Waterhouse did the one thing artists always say not to: She read the reviews. “I’m not going to lie and say that I’m like, ‘I don’t read stuff,’” she says. “I always read stuff, obviously. I want to torment myself.” She laughs. “No, I’m pretty good at staying quite level. Even when good stuff happens, I’m quite measured about it.”

Waterhouse admits that early in the release cycle, she had “horrible anxiety” about doing press around the album and what critics would say, stemming in large part due to past unkind headlines in the United Kingdom about her music. “I had just put out one song and for years, the headline was like, ‘She didn’t make it into the charts.’ And the song had nearly 10 million streams. I was just kind of shell-shocked like, ‘Oh my God, this is the reaction.’ So I was prepared for disaster.” Eventually she got to the place of thinking that comes with therapy, or turning 30, or any general self-reflection: People don’t care as much as you think they do. “No one’s f*cking thinking about you. No one gives a f*ck,” Waterhouse says. “Like, get over yourself.”

Not that she ultimately had much to worry about — the album has been widely well-received, even from the UK press (NME gave it a rave four-star review). Plus, on album release week, her second single ever released, 2017’s “Good Looking,” hit number one on Spotify’s Viral Hits list, thanks to an unexpected bump from TikTok. “I made that song in France with some musicians I met backstage at a show, and later I would show people that song and they’d be like, ‘Oh yeah, fine,’” she says. “It’s like a really nice little wave from the past saying and acknowledging all those hours, all that time that you put into something, even when it feels very disjointed.”

It’s been a busy week for Waterhouse, to say the least. In addition to going viral and releasing her album, she also wrapped on Daisy Jones and played the album live for an audience for the first time. “When you start doing live shows, what happens there sort of obliterates everything else,” she says. “The show on Friday, that was the first time anyone’s ever bought tickets. Do you know what I mean? I was shocked. Like, shocked. You can finally really feel and touch what’s happening. It’s kind of overwhelmingly cool for me when I meet people after and they’re like, ‘We’ve been here since the beginning in 2016.’ And I’m like, ‘I didn’t even know you guys existed!’”

Beyond her two nights at Elsewhere, later this summer she’s heading on tour to open for Father John Misty. It’s a ways off, but she’s already trying to get into tour mode. “I’m so excited and I’m terrified,” she says. “I feel like I’m broken from a few shows. There’s certain things I need to not do, like the stupid smoking and drinking before the show… There’s actually a big amount of self-sufficiency. There’s no one going, ‘Oh, make sure you’re here,’ or ‘Get on the plane,’ or ‘Go to the airport.’ No one’s going to tell you to not destroy yourself every night.”

Step one: Maybe make just a few less random friends — no matter how serendipitous — while out and about. “I learned my lesson on Friday night,” she says, shaking her head. “I was obviously excited about the album and then did the show and somehow was on the sidewalk at, like, 4 a.m. in downtown LA and then had to get up at 8 a.m. to go to San Francisco. If you go online, I’m wearing the same outfit [the next day]. There’s no differentiation. I was on the plane with a pair of pajamas on with these bizarre sandals... it was just so catastrophic. I had to find an emergency makeup artist just for the fact that I had giant eyelashes on and they were, like, inverted. I was a full mess. Lesson learned.”

There’s definitely progress: As we say goodbye, she heads off 15 minutes ahead of schedule, eyelashes fully intact, a slice of well-earned cake in hand.