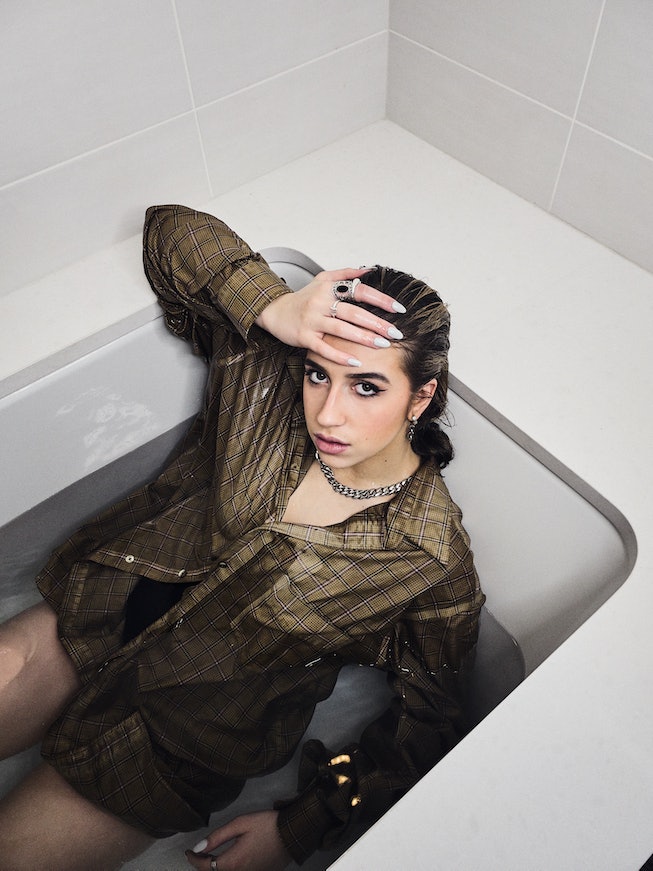 Tate McRae is no stranger to the spotlight. The 17-year-old got her start years ago as a contestant on So You Think You Can Dance. She landed in third place, but it was only the beginning of her story. The Canadian-born star spent her early years training to be a professional dancer, but not long after her SYTYCD days, she became a viral sensation from a YouTube video she uploaded of herself singing a song she wrote. Her 2017 video of “One Day” is just 14-year-old McRae singing in front of her piano. It’s an intimate look at a talented young artist crooning sweet, sad, and relatable lyrics from her home.

In January 2019, she released her debut EP, All the Things I Never Said. The collection of songs is deeply personal and gets to the essence of her sound, with synth-pop beats to compliment her honest storytelling. Some might compare her to Billie Eilish — they both have that same disaffected teen look and are wildly young and talented. “Tear Myself Apart” on All the Things I Never Said was actually written for McRae by Eilish and her brother, Finneas.

These days, McRae’s relatable songs routinely make the rounds on TikTok. Her 2020 banger “You Broke Me First,” off her upcoming EP Too Young to Be Sad, has soundtracked thousands of teens suddenly dropping their smiles in time with the beat as they recount lost crushes, cheating exes, and all other relationship woes. On her newest single, “Slower,” out now, she wistfully pleads with a lover to slow things down. It’s raw and real-sounding, and might be her best yet.

Zooming from her basement at home, McRae spoke to NYLON about what it’s like to be a budding pop star during a pandemic, what’s next for her, and the process behind Too Young to Be Sad, out March 26.

What was it like being on SYTYCD? How did it affect your transition into music?

I originally thought I was going to be a professional dancer when I grew up. I took it really seriously. It felt like dancing was my only way of expressing myself until I got into writing, and then I realized that there were two sides of my brain that I needed to work all the time. You get a piece of choreography and need to do exactly what you're told. With writing, I felt like it was just my free place where no one told me what to do because it was just my own. I definitely think my dancing prepared me to work under pressure and under stress because that's literally all of the dance world is.

Have you gotten to do many live performances? I know the pandemic has probably stifled some of that.

Yeah, it's been really interesting. I've done the European Music Awards, Jimmy Fallon, Jimmy Kimmel. It’s been weird because obviously it can't be live, so I have to record it in Toronto. But the coolest part is that all of my friends who I used to compete with are my dancers on all these shows.

“Rubberband” is a song of yours that I really love. How did it come together?

I have this rubber band that I have all the time on my wrist, and sometimes when I get nervous or anxious, I'll do this twiddle thing with my finger and I'll snap the rubber band. A lot of people use rubber bands to cope with things like anxiety and depression and addiction. People use it to get over something. We thought that was a really cool concept: being addicted to a person, and snapping this rubber band and constantly being reminded that they're not there anymore and you have got to get over it. That's a pretty painful thing to go through.

It started in a three-hour Zoom session. I'd already written a verse and a pre-chorus. It just wasn't sitting right, and I could feel that, so I sat on it for two months. Then I got in one of my writers who I worked with on “You Broke Me First,” and I love her, and we rethought the whole story and rewrote the song, got it reproduced, and just built the whole thing out, keeping the chorus. So it was like a couple of sessions later and a lot of thinking on it that it actually got it finished. It was different from other songs, for sure.

Tell me a bit about the process behind your new single, “Slower.”

This one's so funny because I wrote this when I was 14, and I loved it. But the problem is, when you sit on a song for two years, it becomes really stale and you just hate it. That's what kind of happened with this song. So my team pulled it out again and were like, “We should listen to this one again.” And I was like, “No, no, no. I don't like it, and I sound super squeaky on it. I sound like I'm 14.” We reproduced the whole thing. I rewrote a few lyrics and I recorded it in my 17-year-old voice, and it sounded completely different.

I wrote it originally about a crush I had when I was 14. I was like, “All right, buddy, we got to move in the moment.” I think that happens a lot with people. They're not ready for commitment, so I feel like you just get led on for months and months and months, and then you're like, “I'm wasting my time.” That's kind of what this song was about — I can move on and do things, if you just communicate with me and you're honest.

So, it's very cold. That's the first thing. Obviously I'm very proud to be Canadian because there's a lot of crazy cool artists that come out of Canada. It's always been my home ground, even if I'm traveling around the world dancing or singing or in L.A. all the time. But Alberta doesn't really have a music industry. It's super small. I'm probably going to move to L.A. when I'm 18 or something, but it's been cool growing up here. I used to travel a lot [to Los Angeles] for competitions and conventions and stuff for dance. I'm looking forward to getting away from my parents for one sec.

Who are some of your favorite artists who inspire your music or inform your work?

I'm a huge fan of Post Malone, Jeremy Zucker, Jessie Reyez. Obviously I love The Weeknd. I feel like I take little glimpses of random things, like a whole bunch of different genres. Sometimes I like listening to rap music before I go into a session, and just reading lyrics to see their flow and how they make up their melodies because I think they have the most interesting melodies. But it changes all the time.

“[I]t's super vulnerable and scary to just spill everything that's on your brain.”

What’s your favorite song to perform?

I have a song called “Stupid” that I love to perform. It's just fun. It's rappy and it's fun. But “You Broke Me First” is definitely a special one that I think I'll always love. I think it was just really well written. I feel like the vibe in the writing session always influences how I feel about a song when I perform it. If there was a bad vibe, I will forever hate the song, no matter how great it is. It will just leave a bitter taste in my mouth. “You Broke Me First” was a great session, and so I will always love performing that song because of that.

I've been listening to your new EP, and it's so fun and great, so I'm really excited about it coming out soon. How did you come up with the title for your new EP, Too Young to Be Sad?

I get so nervous releasing music. You just never know what's going to happen or if it reacts well. You just never know. But I'm the worst at titling things. So I really wanted something memorable, but kind of disregarding the whole thing. Because I talk a lot about teenage heartbreak and just really miserable things, and then it's like the title just completely throws it away. It's like, “Yeah, but I'm too young to be sad, so who cares?” It wraps it up in a way. Although I'll feel every single one of these things so deeply, I also always have the mentality of like, it doesn't really matter at the end of the day.

What does a typical studio session look like for you? Is there something that you have to do when you're at the studio or before you go?

So a typical studio day right now is me walking down to my basement, into my dad's office, and then turning on Zoom. But usually I need a guitar loop or a piano loop, something that I find really pretty or sparks my inspiration. Then I'll usually just start free-styling. I have a big computer where I'll pull up a Pinterest board and I'll just scroll through pictures. Because when I have a visual reference, then I can start thinking of random stories, and then you'll see what's actually on my brain. I can't just walk into a session and say, “This is what I'm feeling.” It's totally my stream of consciousness.

When you don't know a producer very well, or you don't know another writer, it's super vulnerable and scary to just spill everything that's on your brain. So I feel like if you genuinely just let it happen and let it come out naturally, that's when you're going to get the most honest version of it, instead of forcing the lyrics around it.