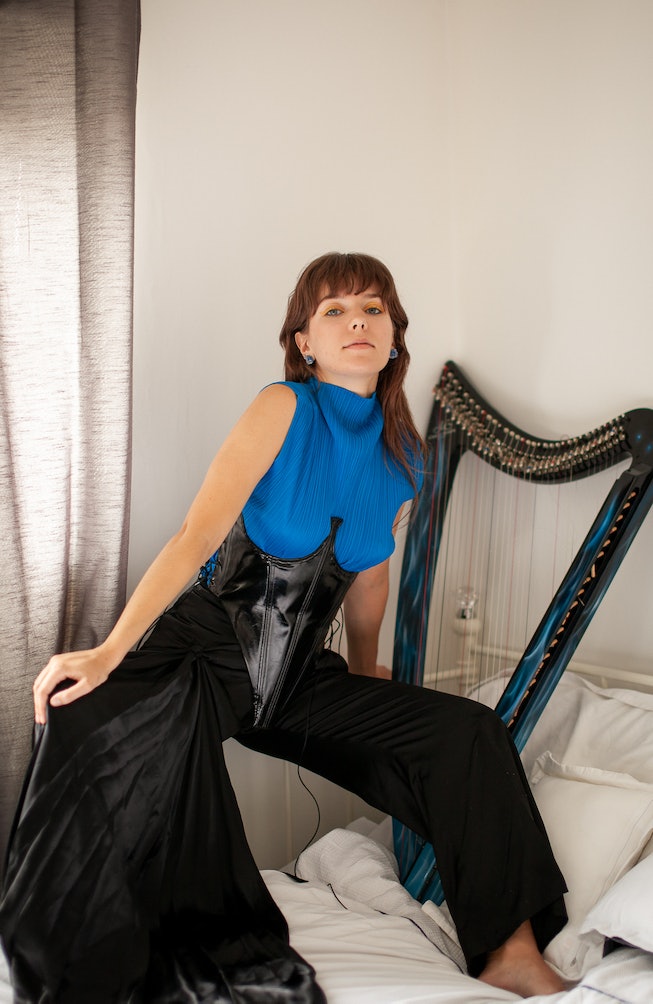 Long distance relationships get a bad rap for good reason. Humans trying to close a physical gap with only the limitations of technology at their disposal seems like a scenario hard-wired to fail miserably more often than not. In recent years, many weird novelty products have been introduced to try and offer up a solution, though it always feels like it'd be more depressing to engage with a fake simulation of the real thing than to just simply be alone.

UK singer-songwriter and classically trained harpist, TATYANA, has known that dilemma, and crafted her own solution. Turns out, it's a pretty simple one. She wrote a song, "Shadow On The Wall," which NYLON exclusively premieres below — and the striking tune offers more immediate intimacy and genuine connection than any heartbeat pillow or light-up gadget. The DIY-sounding production paired with her hovering and delicate vocals make it feel like a bittersweet hallucination when she marvels, "Like a shadow on the wall/ You're nothing but a dream."

The accompanying video, shot in her home on Photo Booth, also lands like a new-old lesson on intimacy in this age of COVID, where every relationship is now functionally an LDR. Sometimes, a pixelated version of a person is just as real. Hear "Shadow On The Wall" below, and look out for her debut EP of the same name on July 17. Read on to learn a bit more about the emerging song-maker.

I grew up in South East London, Peckham. My childhood was quite interesting — my brother and I weren't allowed to watch TV or movies as my mum deemed them to be "capitalist propaganda!" So we grew up on taped Soviet cartoons (which are amazing, check out Cheburashka) and these incredible animated Shakespeare plays for kids. One of my earliest musical memories was my dad playing all these punk records in the car. We used to listen to the Only Ones and The Clash deafeningly loud on road trips and my brother and I used to get a real kick out of singing along cause it was the only time we were allowed to swear.

How did "Shadow on the wall" come about?

I wrote "Shadow On The Wall" for someone I was seeing at the time. He lived in a different country and we had to find new ways to communicate with each other. It’s really hard for me to be earnest over text — it lacks nuance and credibility. I was feeling stuck in this virtual relationship so I wanted to explore the digitization of romance and express those feelings in a sincere, artistic way.

You were a classically trained harpist before diving into music. Has your harp training informed what you make today?

Going to music school definitely killed any libidinal forces in music making for me for a while. I was always conscious even while attending Berklee that I needed to preserve something important, something I don’t think can be taught; I didn’t want the light stamped out of me by the sheer weight and volume of the information given to us.

When I moved back to London, I immersed myself in music cultures that were totally disparate from where I had just come from. It was like regaining feeling in your arm or leg after it goes numb — I had to remember why I made music in the first place. But of course I’m thankful for all the extra tools my training provided me ... now there’s a symbiosis.

You've travelled and lived in many places; what's something important you've learned through your many moves?

Moving can be very hard — you learn to leave parts of yourself behind. I feel like there’s all these ghosts of myself wandering around in these places, frozen in time. But when one door closes, another opens. I feel lucky to have seen so many interesting and radically different places. You learn to respect other ways of living, other cultures, traditions, and politics. It expands your framework of the world.

I’m going to say Pang by Caroline Polachek because I absolutely rinsed it this winter. It’s such a weird album in that it doesn’t sound current at all, but it doesn’t sound like the past, either. Timeless. Also it brings out my inner music nerd — who would have thought you could write a pop song in 7/4? Genius!