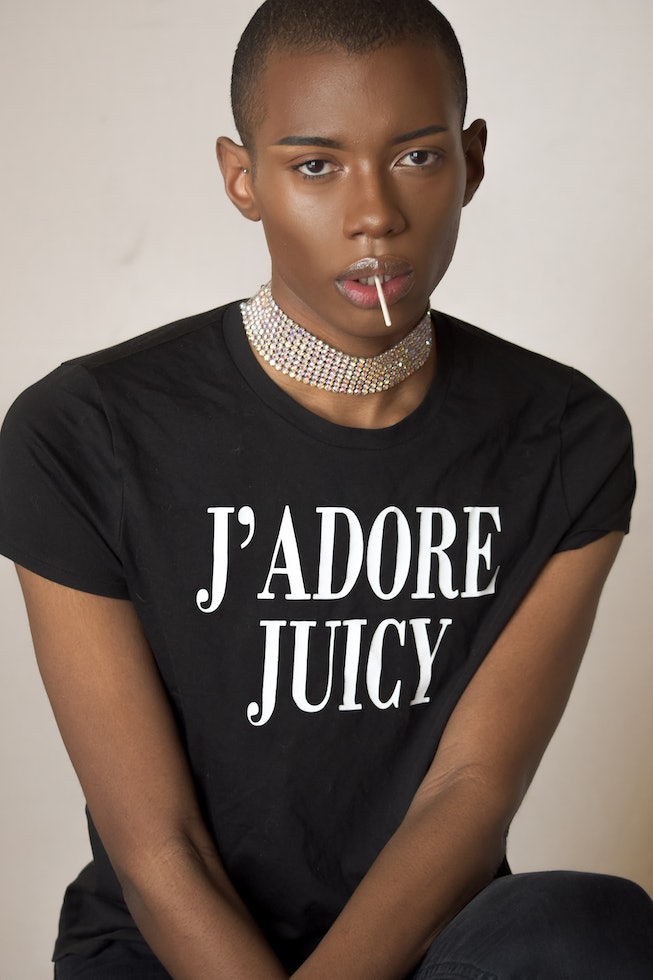 In 2018, a forward-thinking crew of online song-makers — That Kid, along with his friends Slayyyter and producer Ayesha Erotica — released "Dial Tone," a hyper-pop song about having phone sex. It was a DIY triumph, an example of three online creators making studio-level glossy pop from their homes. Now, two years later, That Kid has revisited the topic of cellular devices again, this time covering the all-time classic Soulja Boy's "Kiss Me Thru The Phone" for his debut album Crush.

Pushing the R&B original into hyper-speed, That Kid adds beat breakdowns and chopped up vocals over new sparkling pop production, effectively dousing the original in a candy coating as shiny as a bedazzled hot pink RAZR. It's "Kiss Me Thru The Phone" if it was made in 2020, from its nostalgic-futuristic aesthetic, down to its socially-distant premise. Fittingly, the track's homemade video, which NYLON premieres below, is a collage of photobooth out-takes and early-aught relics: a Hello Kitty flip-phone, MySpace's "online" logo, and Madonna and Britney's VMAs kiss.

"Filming the video for 'Kiss Me Thru The Phone' was really fun honestly," That Kid writes in an email. "I was originally planning to do a video for a different song out in L.A., but once the pandemic hit I canned that idea. I decided to just try and make the best of the situation and film something on my own. I also have to give huge props to my friend Leo for editing the video for me. He really turned it out and helped make the video special."

Watch below, and read on to learn a bit more about That Kid.

I’m not up to much! I recently spent way too much money on candles from Bath & Body Works online but my room does smell pretty amazing at the moment.

Tell me a bit about your childhood; how did you get into making music?

My early childhood was honestly pretty boring! I was always a creative kid, but I wasn’t very musical as a child. I started out doing art and was heavily involved with that until I hit 14. Around that time I grew tired of art, but I still wanted a creative outlet of some sort. Long story short, I ended up stealing my dad’s gaming headset and started recording songs over random beats I would find on YouTube in my closet.

Why this Soulja Boy cover?

The first time I heard “Kiss Me Thru The Phone” I was really young, probably eight or nine. I’ve always thought it was a really emotional song. The whole concept of only being able to see someone through the phone when you really miss them is so sad. I wanted to cover it because I’ve made so many songs about phones so it just felt really natural to cover this eventually.

What's a song you wish you wrote and why?

I wish I wrote “Stephen” by Kesha! It’s such a relatable song honestly. I also love that the song has a more lighthearted approach. Kesha’s such a brilliant writer. I’ve for sure had my moments where I’m by the phone desperately waiting for a text back from a guy who definitely could care less.

I don’t really do much besides make music, but in my down time I love to just call up my friends and chit chat! I’m the kind of friend who literally always wants to FaceTime for hours. I’ve also been trying to figure out how to make TikTok videos recently. One day I will figure out how to use the app! I’m manifesting that for me.