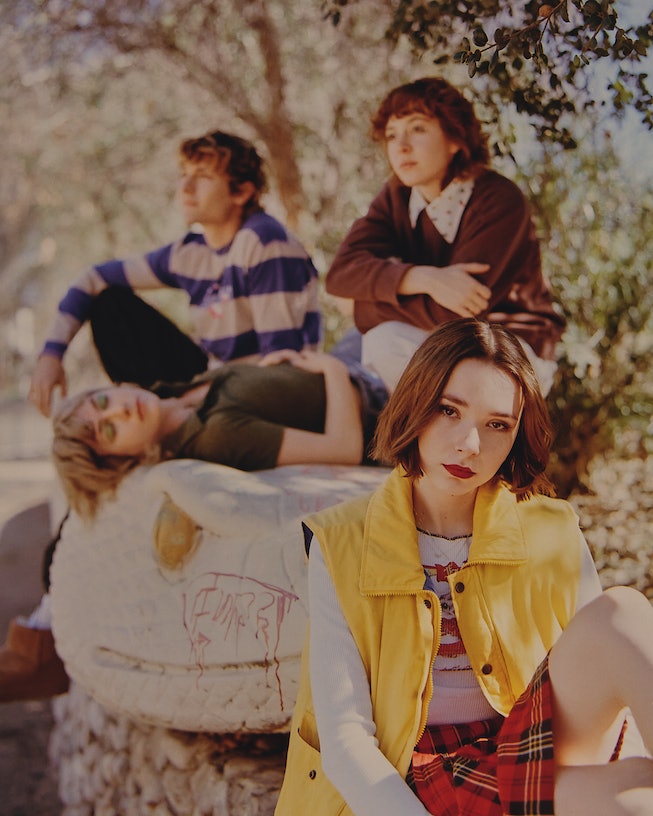 The Regrettes are hitting Coachella with a newfound mantra: “Who the f*ck cares about being cool?” as lead singer Lydia Night puts it. “What matters now is being confident.”

It’s with that mindset that the Los Angeles-based quartet will take Indio, playing the new album that spurned it in the first place. Further Joy, out now, is what Night describes as a full alt-pop album. “I'm so proud that we are able to confidently use that scary word from the past. It isn't scary anymore,” she says. “I just had this memory from recording the first album and me telling our producer, ‘Don't use that sound; that's too pop.’ I was constantly being like, ‘Do not autotune a single vocal.’ I was terrified of not being ‘real and cool.’”

Fans who have been with the band since that first record, 2017’s Feel Yourself Fool!, won’t be surprised when they listen to Further Joy. However, it is, at its core, a Regrettes album in its truest form while leaving room for its members — Night, guitarist Genessa Gariano, bassist Brooke Dickson, and drummer Drew Thomsen — to reflect on and highlight who they’ve become. “This was the first time we've ever done an album or made an album where we weren't consciously thinking that there's a sound we need to stick to,” says Gariano. “We were sticking to our guns in a way. And now we really threw all that out the window and said, ‘We're going to make the album we want to make.’ And when pop influences do creep in, that's amazing and we'll embrace them; same with when the past creeps in, you embrace it.”

Nearly two years of forced self-reflection and nothing but time to think largely influenced the record, which Night considers their most personal yet. The album title came from a session early in the writing process, when she heard a friend talk about a book he was reading called Further Joy. “That phrase just stuck with me,” she says. “What I had been writing about for so long was all under the same umbrella of chasing this concept of joy and a concept of a perfect joy that doesn't really exist. And the idea of being in this hamster wheel that kept me in my anxiety and depression and just striving for this perfect feeling, to the point where I wasn't appreciating anything going on in the moment. I felt like it just really encapsulated everything that we did with this album.”

Lyrically, the album delves into mental health and its effect on one’s emotions — the result of deep introspection that comes from taking the time to look within. “I always felt like my songwriting was so vulnerable, and it's funny that this time writing the album felt so much more vulnerable than ever,” Night says. “I didn't even realize how surface-level I was in the past. I was putting up a guard, and it's really weird to naturally just have that broken down, but it's awesome.”

Which is where the pop elements come in. “I think there's nothing better than dancing away your pain,” Night says. “That's the kind of album we wanted to give people and give ourselves. I really love writing pop melodies, but then lyrically, this was just the darkest album that we've written. A lot of these songs could have easily been taken to a dark place... We could have made such a different album.”

The band cites everyone from Charli XCX and The 1975 to Enya and Kevin Abstract as influences for the record. “On our first album, that sound is what I was listening to,” Gariano explains. “So it makes sense that we may evolve. There is no one weaker choice.” Adds Dickson: “We did what we liked and what felt natural for each song, basically. And we like all those styles. So it just made sense.”

The band has already embarked on their Spring 2022 tour and are seeing fans react to the new music for the first time, often singing back the lyrics — even though only a handful of songs were officially released when they hit the road. “It is so fun to watch,” Night says. “We've definitely tried out new things and have been able to feel if the vibe's there or not, if it's going to work live when the album's out. You can feel when it works. And it works in context to our existing set, which is amazing.” Expect to see a mix at their Coachella performance — Thompson’s first time attending in general, let alone performin. (The Regrettes were previously part of the bill in 2018, prior to Thompson joining the band.) “It’s literally like taking a kid to a candy store,” beams Night. “My favorite feeling in the world is introducing people I love to things I love. And this is the ultimate experience.”