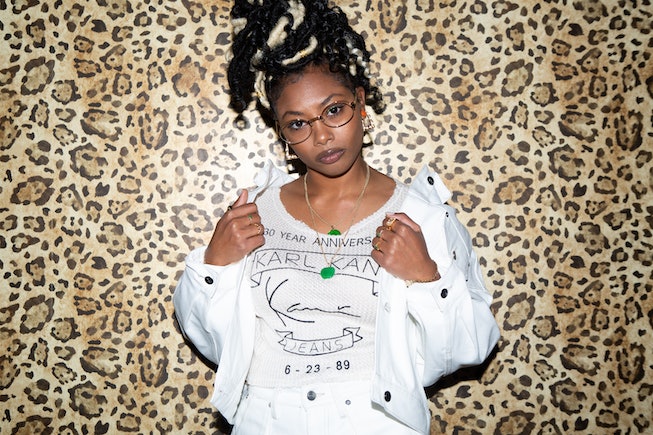 Oakland rapper Tia Nomore has been working the Bay Area circuit for a minute now. After years cutting her teeth at freestyle battles and cypher circles, Nomore's earned opening act slots for Princess Nokia, CupcakKe, and Cordae, as well as collaborations with Kehlani, IAMSU!, and Bay legend E-40. Her fast-paced yet breezy delivery has long marked her as a promising act to watch. Last fall, Nomore shared her latest album, Level, a package of optimistic and bubbly raps. Now, she shares the music video for standout track and lead single "Nu Chain," which NYLON premieres below.

A charming and braggadocios cut about hitting up the jewelry store, "Nu Chain"'s accompanying video, shot by Keoni Mars, finds the rapper roaming around Los Angeles' jewelry district as she shops for some new bling. "My first time being in the district was pretty invigorating," Nomore writes of filming the video in an email. "You could feel the tension, you know, like we weren't supposed to be there... but we had access so they really couldn't say too much. We got all types of security and police called on us for a few days while shooting, but we saw the vision through anyway."

Nomore also bumped into Nipsey Hussle's old jeweler during the process, which she recounts in a charming story below.

"I knew 'Nu Chain' would be a single when I began recording it. It was more of a self-care anthem for me at the time, unlike my other records which are more geared towards self-enhancement by way of dodging bullsh*t. This was about adornment! Produced by Mikos Da Gawd’s bubbly ass, instantly a feel-good record which reminds me of some old-school Dom Kennedy if I think about it. The first verse I'm manifesting, the second verse is an arrival!

Like in the song itself, I feel like I manifested a lot in the present shooting the video. The woman jeweler I hold so highly on the record was just an affirmation that came tenfold through my sister Ari Gold of Gold Teeth Gallery who had been working as a goldsmith for some time amongst her numerous tricks of trade.

I knew I wanted Keoni Mars to shoot this visual because he's the only one I trust with the vision to keep it solid. He's like a brother to me and always down for growth — I mean, he literally shoots MOVIES! Never lacks on the vision, loves what he does, always delivers.The concept was simple. Styling was an easy call — I had to summon my girl Parisa, originally from Japan, and who is a designer amongst her other trades as well! Very simple. Ari knows LA like the Bay and ended up taking us all through the backends of the coveted Jewelry District.

My first time being in the district was pretty invigorating. You could feel the tension, you know like we weren't supposed to be there... but we had access, so they really couldn't say too much. We got all types of security and police called on us for a few days while shooting, but we saw the vision through anyway. In fact, through the goldsmith family Ari had been working with, we were able to meet one of Nipsey Hussle's jewelers off the humble. Shocked, I just simply asked for a favor and he liked our energy. We played 'Nu Chain' for him and of course he felt that! Let me hop behind the counter with him and get him in the video and had the whole section jumpin'. So shout-out to the plug for the love on that for real. It's like you got n*ggas coming into your place of business, already in a bunch of chains, Adidas sweatsuits and big-ass movie cameras and you still let us fulfill that destiny off the jump. He didn't have to, but that sh*t was player.

Being from Oakland, I didn't know how hard it was to really shoot down there without a permit and all that, so you know I was just off the strength with it. But to actually get everything done the way we did was kismet to say the least. Shout-out to our Aunty Lena at Victoria's Collections, Dr. Polish, and our OG Rocky at Nova Gold for the love and support, even still. The next day I made it my business to bring a huge bouquet of flowers for Ms. Nina to set humbly upon her display case just to show my love and appreciation for her, but also to ensure that the rest of the opposing jewelers could look at it all week and be mad they hated on the kid in the first place."