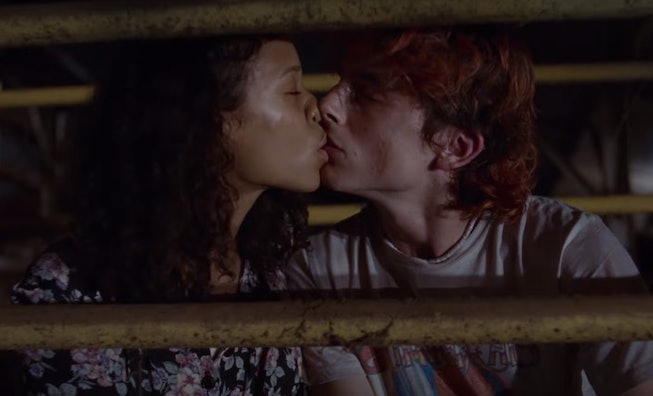 The first trailer for Bones And All has premiered, starring Timothée Chalamet and Taylor Russell as young lovers who also happen to be cannibals.

Based on the novel by the same name by Camille DeAngelis, Bones And All is both a romance story and a horror film, with the trailer interspersing tender scenes of Chalamet and Russell falling in love with graphic moments of bloody violence and murder.

Russell (Escape Room) plays Maren, an “eater” who is abandoned by her father as a teenager. She hits the road, crossing 1980s America alone and searching for companionship. Eventually, she meets Lee (Chalamet), a fellow eater, and the two fall in love.

The rest of the plot deals with the pair’s love story as well as their ostracization from society due to their condition of being eaters. The trailer is overlaid with Leonard Cohen’s spooky “You Want It Darker,” and Chalamet sports a shock of dyed red hair. It’s all very dystopian.

The film is directed by Luca Guadagnino, making it the second time the Italian director and Chalamet have worked together since the latter’s breakout in Call Me By Your Name.

“There is something about the disenfranchised, about people living on the margins of society, that I am drawn toward and touched by. I want to see where the possibilities lie for them, enmeshed within the impossibility they face,” Guadagnino said in a statement about the film. “The movie is for me a meditation on who I am and how I can overcome what I feel, especially if it is something I cannot control in myself. And lastly, and most importantly, when will I be able to find myself in the gaze of the other?”