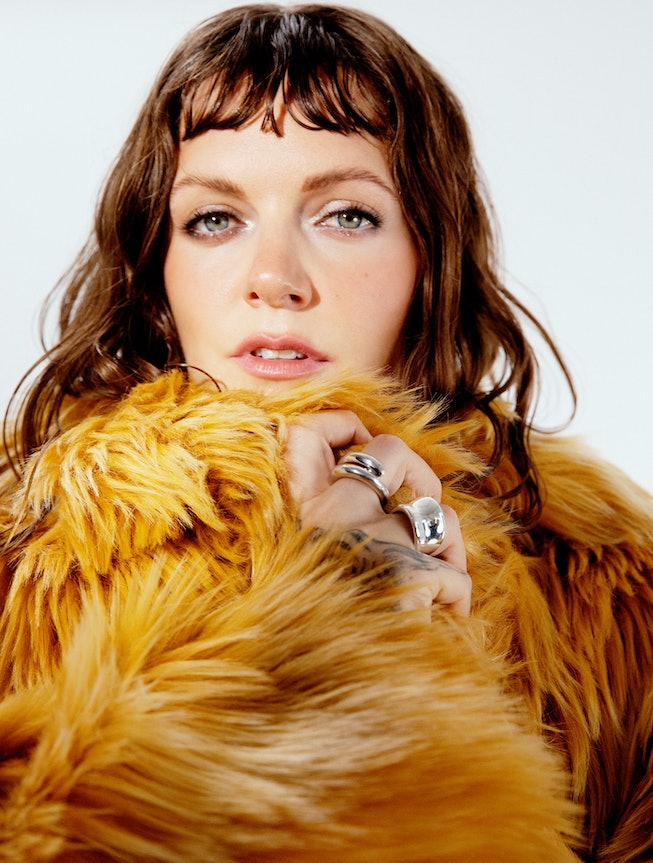 In July 2020, Tove Lo did something she never thought she’d do: get married. One hot weekend in Las Vegas, the pop star who once proclaimed “only one dick, that’s a bummer” eloped with her boyfriend and creative director, Charlie Twaddle, and threw an intimate rager in a little chapel. There were Modelos, a mismatched bride and groom party, a heart-shaped arch of red and pink balloons, and, of course, lots and lots of dancing.

Over Zoom on a recent afternoon, the 34-year-old says she’s still grappling with what domesticity means to her. On “Suburbia,” a stormy dance song from her fifth album, Dirt Femme, she gets real about her ambivalence toward marriage and motherhood, promising, “I can’t be no Stepford wife.”

“I thought of myself as being this free-floating person, having this life not attached to anybody: ‘No one can really count on me, I won't need anybody,’” she says of the song, clutching a Spindrift and sitting cross-legged on a couch in the dedicated writing room of her Los Angeles home. “Now being married in a straight marriage, and as a queer person, sometimes I'm like, ‘What happened to my identity?’ And then thinking, ‘Well, we're not going to have kids, are we?’ And then I'm like, ‘Or are we?’ Maybe I do like being a wife. I like wearing a ring — which I never thought I would say.”

Eight years after establishing herself as Sweden’s high priestess of horny, hot-mess dancefloor anthems, Tove Lo is probing deeper emotional territory on Dirt Femme, released through her own record label, Pretty Swede Records. Yet all the things that made her a killer songwriter back when she was singing about getting high and trolling sex clubs still apply: She loves to broadcast the feelings other people would rather bury, and her lyrics reject the tidy conclusions of most radio fare. In Tove Lo’s world, the choruses are crisp, but the stories are as complicated as real life. “The one thing I've always been taught is [pop music’s] supposed to have one message,” says the singer, who counts legendary hitmaker Max Martin (Britney Spears, Katy Perry) as an early mentor. “But that's not how we work in our minds.”

Dressed in a highlighter-colored Balenciaga sweatshirt with her blonde hair loosely down, Tove Lo is friendly and ruminative, occasionally undercutting a deep train of thought with a self-aware laugh. Just four days ago, she was on complete vocal rest after losing her voice from being too eager to get back to her pop star duties. “I feel like I forgot how demanding and intense it is to tour,” she says. “It's just everybody's first day back at work.”

“When I was in the shittiest of places, I hated listening to body positivity songs because it just made me feel like a failure.”

Tove Lo compares the making of Dirt Femme to that of her first album, “where you have your whole life and everything that you’ve been through to put into the record,” she says. Some of that was due to the pandemic, which gave her room to mess around and experiment during those early, isolated months at home. But Dirt Femme is also her first release as an independent artist since leaving Island Records, which Tove Lo says gave her a newfround freedom. She always operated like an indie artist working within the major-label system — she’s said she paid for many of her own music videos herself, for instance — but this time, she didn’t have to worry about deadlines or pleasing other people. On the record, songs swing from sleazy house (“Attention Whore”) to kaleidoscopic folk (“Cute & Cruel”) to operatic ballads (“True Romance”). “I just felt it’s a journey between me and my fans that isn't really related to the industry,” she says. “I'm just making this because it's the songs I need to write for my own sanity.”

Sometimes, when she listens back to old material, “I can hear that I didn’t have all the time that I needed to really make it what I wanted it to be, because of the pressure,” she says. Now, she can fine-tune the messaging of every track, including album standout “Grapefruit,” about the eating disorder she lived with during her teens. It’s a song she wanted to write for nearly 10 years but couldn’t crack the code on — until she says she was asked to lose 8 pounds in two weeks to film the role of a starving sex worker in the 2021 Swedish period piece The Emigrants. As memories of her old struggles resurfaced, she crafted “Grapefruit” to play out like an anxiety loop, stuck between her obsessive self-talk and her own frustrated longing to get better.

“The reason I wrote it in not a preachy, ‘You can do it,’ way, is because when I was in the shittiest of places, I hated listening to body positivity songs because it just made me feel like a failure,” she says. Today, the song adds a new layer to the raunchiness that has marked her shows (where she regularly flashes the audience) and music videos (see: the semi-NSFW ending of “Fairy Dust”); for Tove Lo, comfort in her skin was hard-won.

If Dirt Femme is a reintroduction to Tove Lo, the strobing album-closer “How Long” was an actual introduction to new fans after it was included in Season 2 of HBO’s Euphoria. The pairing was a perfect match given her catalog of hard-partying, emotionally turbulent bangers — something Tove Lo said as much in a letter to creator Sam Levinson. “I was like, ‘I love this show. It embodies everything that I’ve sung about,’” she says. She’s kept her audience growing on TikTok, too, where she has inspired dance challenges, watched breakout hit “Habits (Stay High)” find new life via memes, and humorously taken part in the ongoing education about how to pronounce her name.

Now several albums deep into her career, Tove Lo says she isn’t worried about churning out more hits — though “I have this dream to hear Rihanna sing something that I wrote,” she admits. She’s more concerned with stretching her artistry and hopes to score a film one day. Still, she hasn’t lost her pop star fire. Before we hang up, she tells me about a recent visit to an Australian music festival where her performance was slotted between sets from rappers 24kGoldn and JID. “I run out and the first five rows are just like, ‘Who the fuck are you?’” she recalls, laughing. “I was like, ‘OK, I got to win these people over.’” By the end, she had the crowd clapping and singing along to “Habits,” and saw the flashes of “Oh, I know this one!” spread across audience faces throughout the set. “I was like, ‘All right, this is good for me — I got to work a little bit,’” she says. “And I do love that.”

This article was originally published on Oct. 20, 2022