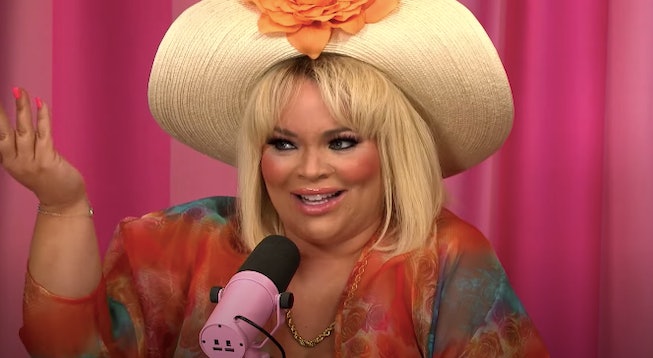 YouTuber’s Trisha Paytas and Ethan Klein’s hit video podcast, Frenemies, is officially over. H3 Productions aired the popular show’s final episode on Tuesday, June 8 — ironically, as some pointed out, on National Best Friend’s Day — which culminated in a fight between the two hosts. What started as a normal conversation ended in an explosive argument over the podcast's creative direction, which all took place on the podcast itself.

To fans’ dismay, Paytas posted a YouTube video on June 8 announcing her departure from the series. In the video, Paytas, who uses they/them pronouns, expressed their deep gratitude for the show, Klein, and the crew, but ultimately relayed their decision to “step away” from the podcast.

Klein similarly explained the show's surprising end on Twitter, writing, “I am honestly gutted over this whole thing, Trisha's video this morning was a total surprise to me. I don’t really know what more I can say or do. I’m very sorry to all the fans of frenemies, I know how much it meant to everyone, I did everything I humanly could to save it.”

Below, a breakdown of what happened and what’s to come:

What are Paytas and Klein fighting about?

Towards the end of Frenemies’ final episode, Paytas and Klein argued over a segment where they answer audience questions. Paytas called the bit “stupid” and “lazy,” to which Klein responded, “A lazy podcast, you don’t do anything for it. You just show up, we do all the work.”

The two then got into an argument about Frenemies’ creative direction and finances, ending in Paytas accusing Klein of gaslighting and abruptly ending the episode.

What have fans said?

Online, fans are debating whether this break up is for real. After all, it’s not out of character for Paytas and Klein to fight. In fact, it's what drives the series. The two of them spend each episode debating topics, oftentimes offending one another with their views, but usually make nice in the end.

This time, however, does seem different. The H3 podcast confirmed the series' end on Twitter, writing, “New episode with a heavy heart as it is our last.”

Is this really the end of Frenemies?

After a long night of apologies and explanations from both Paytas and Klein, the two finally stopped tweeting (though Paytas has since resumed). However, in his final statements, Klein gave fans a bit of hope for the future of his and Paytas’ friendship.

“At the end of the day, Frenemies was a beautiful experiment that I will always cherish. I’ve learned and grown so much from the experience and have Trisha to thank for that. She’s been a dear friend of mine throughout, and I’ll always be thankful for all she’s done for us,” Klein wrote, before adding he was “taking a step back” from Twitter for the evening.

Paytas, meanwhile, has been tweeting through today, writing that she is sorry for the way things played out, but that she is certain in her decision to leave the show.

Addressing fans, she wrote, “[S]omething has been overwhelming me recently and I need to figure out what that is. I know it’s the best thing to leave , I do believe the feeling is mutual and I’m sorry you guys are getting slighted.”