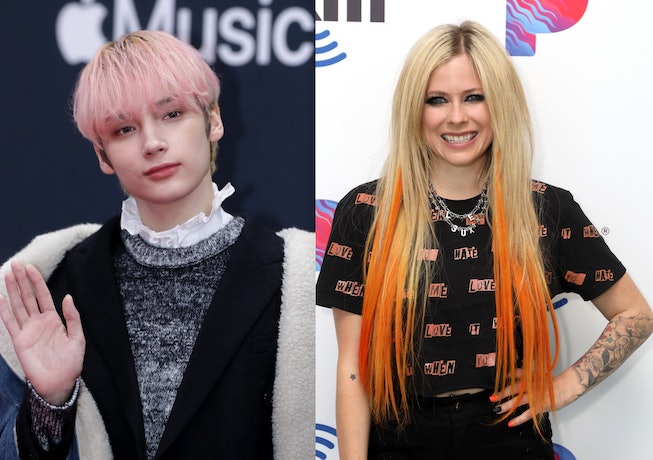 Avril Lavigne’s “Sk8er Boi” just got the K-Pop cover treatment. Hueningkai, one of the lead singers from the group Tomorrow x Together — otherwise known as TXT — released his own version of the classic pop-punk anthem, and befriended the former NYLON cover star along the way

Hueningkai’s cover is a refreshing rendition of the boy meets girl song. With a revamped, synthesized beat and his crystal-clear vocals, the cover gives Lavigne’s song an unexpected and modern twist. After crafting the track, Hueningkai posted a photo of himself on TXT’s twitter account, hinting at the surprising song choice.

The photo shows the K-pop singer dressed in a white t-shirt, while sporting his matching bleach-blonde locks, and holding a light green skateboard. Hueningkai captioned the photo, “He was a skater boy” using emoji.

It wasn’t long before Lavigne saw his tweet. She replied as any pop-punk queen would, and responded with three “rock on” emoji’s. This sparked a brief, but sweet, correspondence between the two popular artists.

Hueningkai then shared a link to his recording of “Skater Boy” and wrote, “Hope you like my cover!! You are an icon.” Upon review the Canadian singer offered her stamp of approval, and wrote back “amazing cover.”

Perhaps with her encouragement we will get more pop-punk covers from the K-pop star down the line, but for now it seems Hueningkai is focused on releasing music with his band. TXT features four other members: Soobin, Yeonjun, Beomgyu, and Taehyun. They were created by Big Hit Music — whose roster also includes the infamous K-Pop group, BTS — and debuted their first EP, The Dream Chapter: Star in 2019. Together they’ve released four albums, and just dropped their new EP Chaotic Wonderland.

You can stream their records on Spotify and Apple Music. In the meantime, check out Hueningkai’s cover of “Sk8er Boi” below.