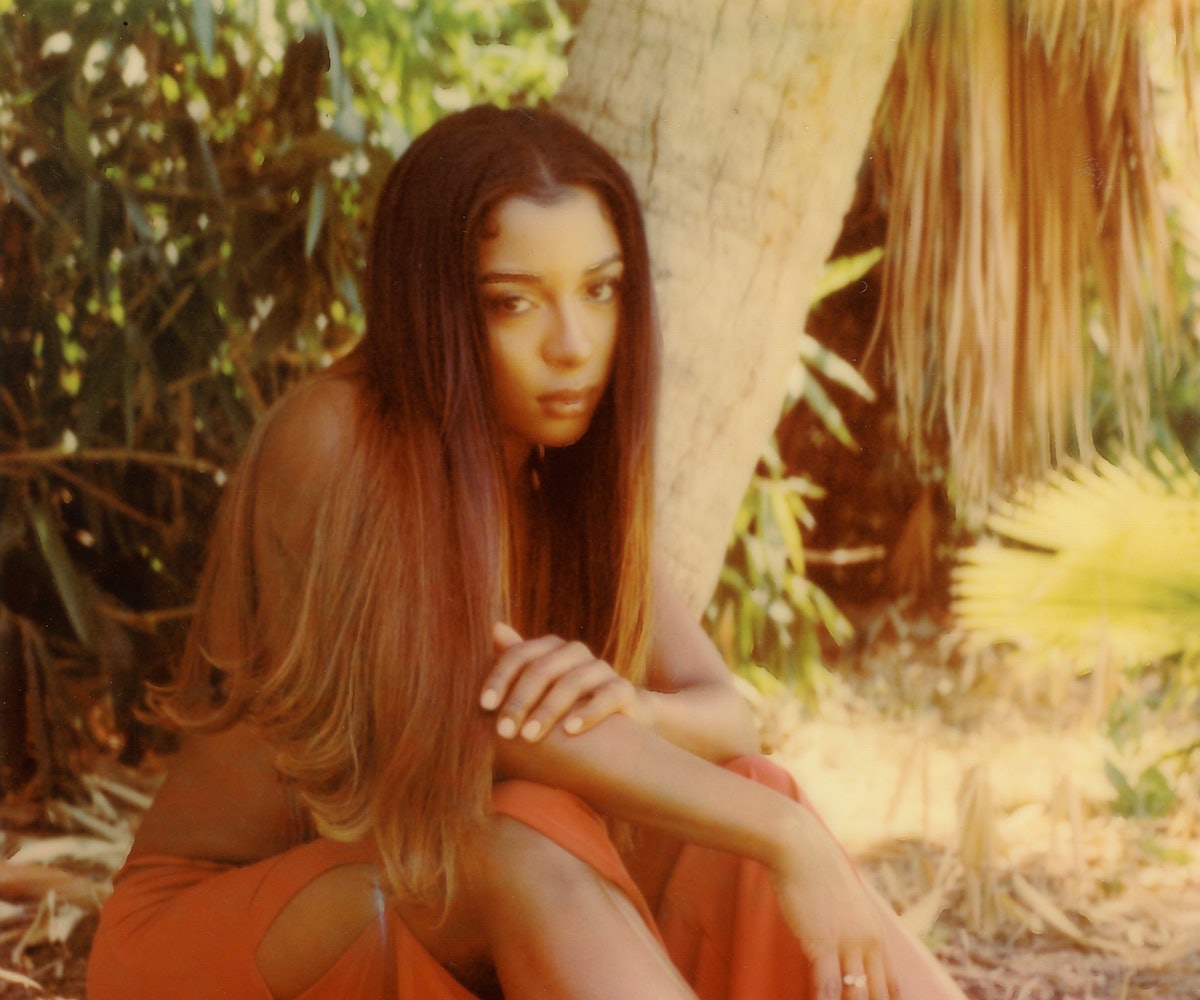 Self Portrait for NYLON

Victoria Monét is finally taking a breather. It's 4 p.m. on a cold Tuesday in February, and happy hour has just kicked off at a lively vegan Mexican restaurant in Manhattan's Chinatown. Putting in their tropical drinks order, Monét and her crew — a publicist and manager — have cause for celebration. Earlier that day, Apple Music announced Monét as its latest Up Next artist — a monthly distinction awarded to the most promising up-and-coming artists, a title she now shares with Billie Eilish and Jessie Reyez, among others. She spent the busy morning making the rounds promoting the new title and latest single, "Moment." Safe to say she's earned a lunch break.

"It's insane," she remarks, folding her pristinely manicured hands on the table. "I feel seen and I feel trusted, and believed in. But also I feel like, 'OK. More work.'"

Dressed in a head-to-toe brown tracksuit with her dark hair half-pulled into a ponytail at the crown of her head, Monét speaks in languid stretches, her voice airy and light. It's one of a trained singer, exuding a sense of gliding effortlessness that just so happens to sound great on pop songs. On "Moment," which she released in early February, it's also an instrument for sultry R&B. The track is taken off of her forthcoming fifth solo EP, Jaguar, a project that now holds as much apprehension for her as it does excitement.

"It feels like more pressure to make [Apple Music] proud because they're putting their name on the line to support me and bet on me," she explains. "This feels like an opportunity to me and I don't want to f*ck it up."

For most of her career, the 26-year-old artist worked behind the scenes as one of modern pop's most in-demand songwriters (among her hits is Ariana Grande's 2018 smash "thank u, next"). But before that, Monét was an introverted but creative child living in Sacramento, where she moved at age 3 after being born in Atlanta. As an only child, she remembers having to rely on her own creativity and the environment around her to keep herself entertained. "I didn't really have a sibling to copy," she says. "So it was based on TV and what I'd seen from older people, which I feel like where my taste in music comes in."

She cites Sade, Earth, Wind & Fire, and Michael Jackson as her greatest influences, the latter informing her first real memory of wanting to become a performer. One of her uncles sent her a tape of one of Jackson's tours, and she would play it over and over in her room to try and memorize the routines. "I felt so much of his emotion in his performances," she recalls. "That's the first time I remember seeing something and wanting to experience that."

But still, she shied away from the spotlight, taking to dance as a way to "hide but still perform." In high school, she fell in with the famed Jabbawockeez-affiliated Boogie Monstarz dance crew. Inspired by her fellow creative crew members, she also began writing songs, taking writing trips to Los Angeles and, like many musicians before her, posting music on MySpace.

One day, after researching the composers behind her favorite songs, she added Rodney Jerkins, a producer for many of Jackson's hits, as a friend on MySpace. Incidentally, he was recruiting for a new girl group at the time, and sent Monét a flyer for the auditions. She moved to LA to audition and made it in. "And it literally changed my life," she says.

Though the group never made it out of its infancy, Monét still regards that period as a valuable life experience. For one, she met D'Mile, a producer she still works closely with to this day and whom she calls "the gem" that emerged from that formative time. It was also during that time she realized that she could sell her hooks to other artists, igniting her songwriting in earnest.

In the years since, Monét has earned credits on songs by Fifth Harmony and T.I., though her most prolific work has come out of her partnership with close friend Grande, going all the way back to the singer's debut album, Yours Truly. "She's from Florida, the opposite side of the U.S.; I'm from California. Her being Caucasian, I'm a Black woman. We feel like opposites that have so much in common and [who] connect," Monét says of their friendship. "I don't think friends usually get to experience this much in business together. It feels rare."

In between, Monét put out her own solo material over the course of four EPs. At the time, she says these were nearly impossible to put all of her energy behind, due to her lack of critical resources or a team. Now she has both. "A team makes a world of a difference," she asserts. "Now I'm existing in my art."

At this point, Monét's colorful tacos finally arrive, to her delight. "That's a flag," she awes, taking in the trio of salsas blanketing her dish. Taking a short food break, the conversation lapses into relaxed story time, with Monét sharing tales of her childhood pet pony (name: "Cool Blue") and Grande's pet pig ("that sh*t big") to musings on the music industry, and the necessity of her claiming her sexual identity publicly. (Monét came out on Twitter in late 2018.)

"The fact that [my sexuality] has to be mentioned is necessary for me because it's rare," she states frankly, in between bites of taco. "But I also want to be human. When a straight person is putting out an album, it's not like, 'Straight artist puts out [album].'"

It's this vibrant collage that Monét hopes will come across on Jaguar, expected to drop this summer. The '70s-tinged seven-track project will largely follow along with the warm lacquered vibes already laid out by the album's previously released two singles, "Ass Like That" and "Moment." On the latter, when Monét declares "This your mutha f*ckin' moment," one can't help but feel it's a thesis statement for this new chapter of her life. All of Monét's years prowling behind the scenes, facilitating other gargantuan hits, has finally led up to a grand reveal — one of an artist that crafts with sharp-clawed precision and a finely-tuned ear.

"The title [of the project] itself really embodies how I feel as a musician," Monét explains. "Being behind the scenes like a jaguar is just waiting for the right time to go for what you want. [Jaguar] is like when you meet someone for the first time and you have a one-on-one date with them, versus like here's me and my mom or me and my friend together," she continues. "I want [people] to feel like I'm taking power back. Because a lot of them are sexual on purpose. As a shy person, it seems like I'm coming out of my box for the sake of art, and for women and for women of color, and for bisexuals, and for the LGBTQ+ community. It feels like a statement to me. Like, you can say these things just as males do. I don't know why we run from it so much, based on people's ideas of what's proper or ladylike. F*ck that."

Ultimately, Monét hopes that she can just make a genuine connection with her audience, one she's nurturing with an almost grassroots ideology through deliberate and direct interactions via social media. Much like Grande, who's now become notorious for her unfiltered Twitter chats with her fan base, Monét is seeking to close the gap between performer and artist as much as possible, questioning how intimate a pop star can become.

Even now in April, as the coronavirus pandemic has shuttered the world's inhabitants away from one another, Monét has made steps to bring people closer. Since the start of quarantine, she's invited fans to dance in the #AssLikeThatChallenge, and asked producers, editors, and fans alike to manipulate an a capella vocal (of hers) that she posted on Instagram under the title "Acapella Quarantune." Over the past few weeks, fans from all over the world — Jamaica, the UK, and more — have participated, just a hint at how far Monét has her vision set.

"I want the human experiences, the one-on-one, the touring," Monét says. "When you see someone so much on social media, you feel like you know them, but when you see them, you can't have a conversation because they don't know you. I want both. I want them to know me."

Special Thanks to Polaroid

NEXT UP
The Art Issue 2022
Dove Cameron, Accidental Pop Star
It Girl
Jessica Henwick Is A Franchise Favorite For A Reason
Entertainment
TikTok's Wednesday Dance Trend Is Giving '80s Band The Cramps A Second Life
Entertainment
The 20 Best K-Pop Releases Of 2022