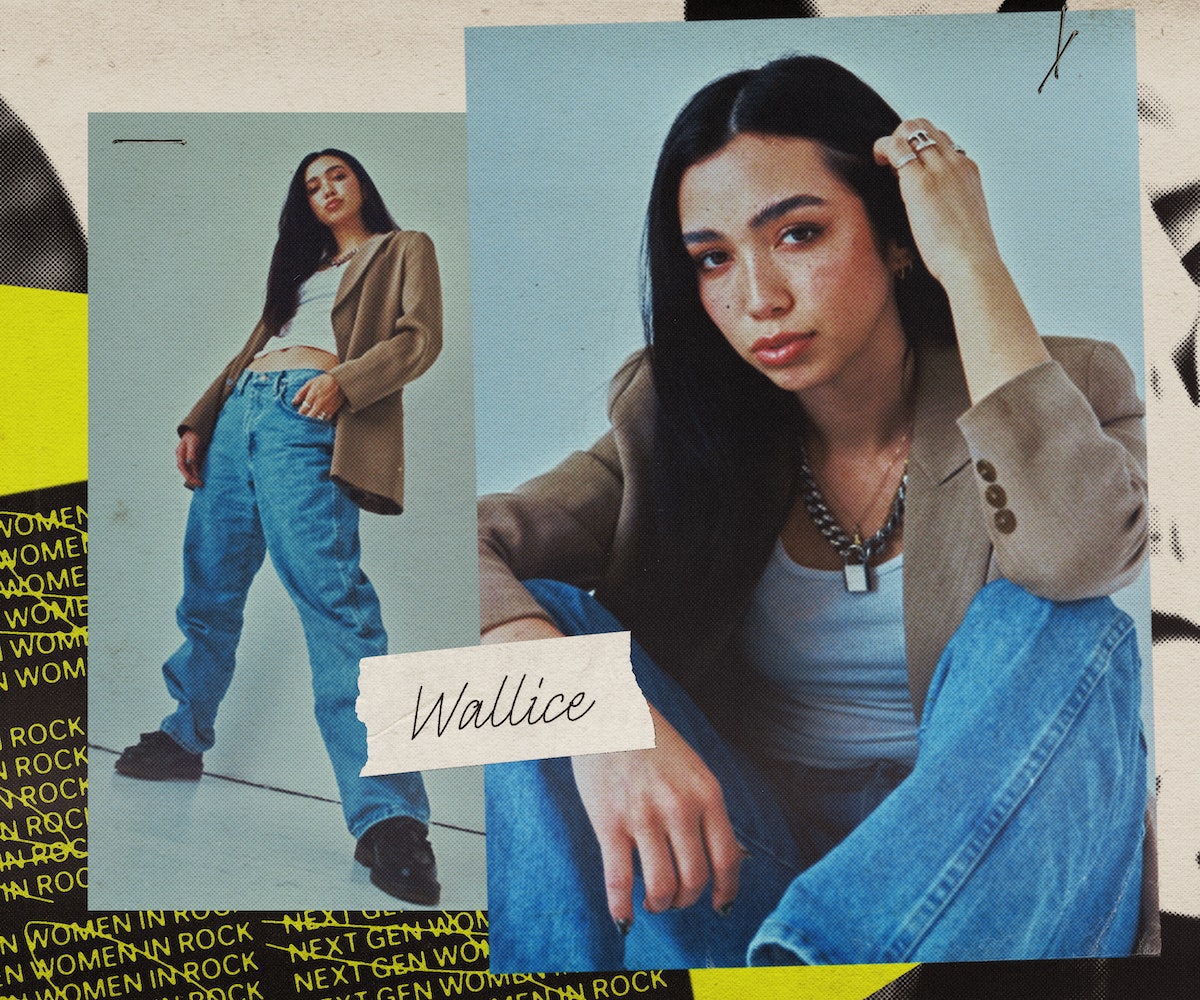 Whether her face is smashed into a birthday cake or recoiling at a hit from a boxing glove, Los Angeles’ Wallice can make you hang on her every word. The 22-year-old singer and multi-instrumentalist may have just a handful of songs out, but she’s established herself as a keen lyricist with a knack for pop culture references and shrewd observations about the surreality of young adulthood.

Working with her childhood friend marinelli on production for her first crop of singles, Wallice (full name Wallice Hana Watanabe) has quickly honed a charming sound that blends homespun DIY pluckiness with contemporary production twists, while her lyrics are pointed and often self-deprecating. On “Punching Bag,” she examines the way a friend’s digital footprint can linger in our lives even after a falling out. “23” chronicles her ennui after leaving music school, and “Hey Michael” repudiates a very particular kind of manipulative man.

“Hey Michael, you American psycho / Where the hell did my night go? / Should have seen all your red flags / Your tattoos look so bad,” she laments on the track’s hook.

With her first EP on its way, the singer talks here about making the switch from indie pop to her current sound, her background in jazz, and making music for 22-year-olds still living with their parents.

I know you’ve been making music and playing instruments for years now, but when did you find the sound that you’re currently delving into as Wallice?

I wrote so many songs from 17 to 21 that were all more indie pop. I really loved Lana Del Rey; her and Lorde were the main influences on me. That music was just on SoundCloud before. I had a couple people who loved that music, especially my mom. Back in October, I released “Punching Bag.” That one’s still pretty indie pop, but leaning towards where “23” and “Hey Michael” have gone in the indie rock world. For so long, I grew up listening to Radiohead and Weezer and Dr. Dog. Those are all more alternative rock, and I wanted to make songs that sounded like that.

You don’t necessarily think a lot of younger Gen Z artists would be influenced by Weezer, but then when you listen and pay attention to the lyrics and the hooks, you can hear that in the music you make.

Yeah, for some reason I love Weezer. My mom’s friend uploaded them to the first iPod I got. It had a bunch of Weezer and blink-182 and Black Eyed Peas. Those were my first favorite artists. [laughs]

For a time you went to music school in New York before deciding that wasn’t the path you wanted to take. Was there something specific that triggered that decision?

I was in school and my major was jazz performance and voice. I just went there wanting to get better at being a vocalist. Jazz is such a technical genre that you have to be very specific in. Once you learn a lot of jazz, you can do almost any genre, I feel. I did just go there one year, but it was so far from my family and I was very homesick the whole year. And also the producer that I work with, marinelli, he lives in L.A. We wrote a couple things virtually while I was there, but if it’s not a physical session you don’t get as much done. For how much money the jazz school was and how far it was, I was like, “I feel like I can do more to further my musical interests at home, rather than be in New York.” Even though New York is so cool and I love it and I miss it, I’m glad I came back.

How has it been to be gaining career momentum during this period of quarantine? Has there been any silver lining to spending more time writing and shooting videos, or has it been frustrating?

I would say silver lining. I’ve never been on a tour, but I have some friends who are tour musicians and I know it’s so tiring and exhausting. I can’t wait to do it, but I think this last year has been really nice in that I would go to my grandparents’ house in Utah when they weren’t there with my producer and my boyfriend, who plays guitar well, and we would be there for a week and write three new songs. Then we went for another week a few months later and finished those songs.

Looking at the videos you’ve done for “Punching Bag” and “23,” there’s a surreal aesthetic to them. They’re DIY-ish, but not overly so. Have you always been the type of person to think about how visuals can enhance your records?

I’ve always been very visually creative and have a very strong opinion on what the visuals to the music should be. When I start writing a song, I usually have some sort of concept already popping in my head of what the video should be or what the art should look like. I like to be very involved. For the “Punching Bag” and “23” videos, I bought the tablecloths from Jo-Ann’s the morning before.

On “Punching Bag,” you talk about how someone’s digital footprint lingers in your life in a weird way, even after a period where you’re maybe not talking to them or seeing them.

The first line that I wrote of that song was because I opened my Google Maps, I put my phone on the little tripod thing in my car, and then it said my friend’s address that I would go to five times a week. I was like, “Dang, I’m not going there for a while anymore.” “Punching Bag” is about two friends at the same time. We’re fine now, but at that point, it was hard navigating the friendships.

As your first full body of work, what are you hoping to get across to listeners with your upcoming EP? How do you see it building on the singles you’ve already put out?

Well, a main thing that I really like is people knowing that I do have a musical background.It’s my own ego probably wanting people to think of me not just as a singer. [Also], these songs [on the EP] are genuinely from this last year of my life and they all fit in the same chapter, because they were all written within a certain period of time.

You named a few people who were formative for you early. Is there anyone who was a big influence that you think might be surprising to a listener?

Jazz musicians, since I have a jazz background. I would listen to Billie Holiday. I love Astrud Gilberto and Antônio Carlos Jobim and bossa nova music. That might be the most out of pocket, but other than that, I’ve always listened to really indie music. I don’t think I would ever make a jazz album, like how Lady Gaga does. But I think that, eventually, there will be more influences from that, compared to right now how it’s more rock-feeling.

Do you find that critics writing about your music have correctly gotten what you are trying to portray with your songs?

Every time I see even a tiny blog tag me on Twitter, I’m like, “Oh my gosh. It’s so exciting.” It’s so new that I haven’t seen anything and been like, “That’s incorrect.” The only thing that was funny is a couple blogs said “L.A. newcomer Wallice,” which I know they mean a newcomer in the industry, but I’m like, “I was born here!” [laughs] But I knew what they meant.

Is there a certain song you think would be the ideal starting place in terms of your discography?

Well, “23” was very autobiographical. “Jazz school dropout... left New York.” That’s who I am, still. Since that came out, I don’t necessarily feel like a loser anymore, because in the scope of the world, things have been going pretty well.

“Punching Bag” came out and was introducing people to my sound, I would say. And then “23” introduced who I am. “Hey Michael” is like, my humor and vibe. I think the order those three came out, I couldn’t have chosen it better and it just happened to be like that. But “23” is the song where I think people will see who I am. I get a bunch of DMs almost everyday where people say “I’m 22 and I still live at home! This is exactly how I feel, I can’t believe you made this song.”

I think the biggest leap that happens for an artist is not necessarily going from having a small fan base to a bigger fanbase but going from not having fans to having fans. That feeling of “people are listening” must be really amazing.

I’m just so excited that people are listening and like it. When you look at the numbers on Spotify of who listens to it from a playlist and who listens to it from saved songs, the saved songs percentage is pretty big. People are going back to it, which is so fun. The fact that they could possibly listen to it on a playlist is one thing, but that they like it enough to go back to it is so sweet.