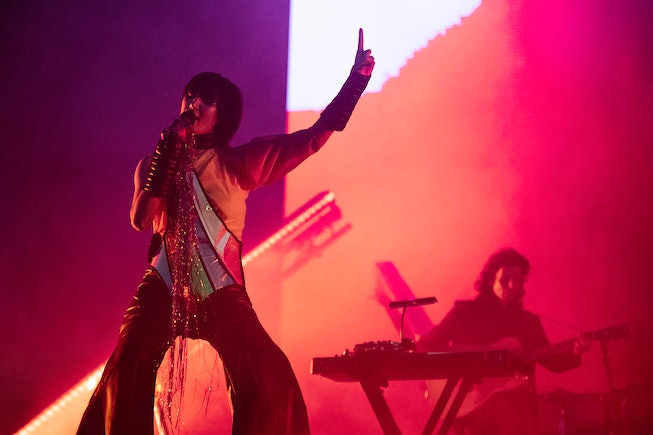 Though the Yeah Yeah Yeahs haven’t released an album since 2013, they never really went away. In the years following Mosquito, the band has reunited for festival sets every few years, in between starting their own families and solo endeavors. Still, when the trio — Karen O, Brian Chase, and Nick Zinner — appeared on stage in their usual formation on Saturday night in Barcelona for a sunset headlining set of weekend 2 of Primavera Sound, it was with an overwhelming air of a long-awaited homecoming.

“Primavera! It’s great to be back. It really is,” O shouted in greeting to the crowd as she walked out in an elaborate robe and hat set that simulated rainbow stained glass. Glittering tinsel hung from her mic, and her hair was in immaculate bowl cut formation. Their set marked their first festival show since the pandemic and their return to the Spanish festival specifically since 2009. But the night’s significance felt bigger than that, too: Following the release of the band’s first official music in years, “Spitting Off The Edge Of The Earth,” it seemed to kick off the long-awaited, full-throttle return of the beloved NYC indie rock band, as they enter into a changed new era.

Still, not all has changed that much. If there’s anything their raucous, playful, and very fun 70-minute set proved, it’s that 2000s indie sleaze is back with a vengeance, and the Yeah Yeah Yeahs are still wicked cool — and fully equipped to be at the front of its revival.

Kicking it off with their new song “Spitting,” the band balanced looking into the past and future with ease. The Yeah Yeah Yeah’s music has always been full and bold, but they presented a different feeling of grandness with “Spitting”’s wall-to-wall shoegaze synths, blasting to fill the massive open space — a new but extremely welcome sound from the band. But it was O who anchored the night’s performance, slipping easily back into her infamous rock star stage persona against the stage’s blood red background. Her voice growled raw and rebellious over certain words and phrases, and her energy onstage still felt as unrestrained as those shows from the late ‘00s, but perhaps matured with age. In 2003, her performance of “Pin” was wacky, wild, and punctuated with flying kicks. On stage at Primavera, donned in her regal set, her interpretation of the song simmered instead with untempered sensuality, where during the last set of bam bam bams she tilted her head back to fully deep throat her microphone, no hands needed, emitting strange groans.

The band’s rebel spirit persisted in their new music as they excitedly debuted “Burning” and “Wolf” from their forthcoming record, Cool It Down. “Burning,” which O had to restart after forgetting the lyrics (“I told you this was new,” she said), couldn’t have felt more timely as she sang about the fiery impact of climate change. “Believer! Took me over like a fever,” she yelped over the jangling, anthemic beat. “In the sea, out of fire, all that burning.”

For a band that’s been active for over two decades and came up on their unforgettable live shows, it was more than clear on Saturday that the Yeah Yeah Yeahs still thrive on stage. O’s excitement to be playing again was palpable as she paused to express her elation multiple times throughout the show. “When we were all at home doing nothing during the pandemic, I was dreaming we could do this again,” she shouted at one point with a grin. After playing “Soft Shock,” she stopped to marvel at the night’s moon which hung over the field like a gleaming oblong pearl. Right before the band played “Maps,” O introduced it as the “Yeah Yeah Yeah’s love song,” before shouting three times, “Love and tenderness! Love and tenderness! Love and tenderness!”

Towards the end, they finally, rambunctiously played “Heads Will Roll,” and somehow — in 2022 — there was nothing in that moment that felt more natural than the entire multiple-football field-sized audience fully rocking out to a song that’s now over a decade old and more culturally associated with a holiday in October. While everyone thought that was the end of the set, they continued with one last song, “Date With The Night,” which felt a bit out of place and was one of a few moments during the show where it seemed like the band was still finding their footing. I commented as much to a friend afterwards, to which he wisely reminded me that we all are right now. It’s true. Once they’ve done that, though, there’s no telling what they can do.