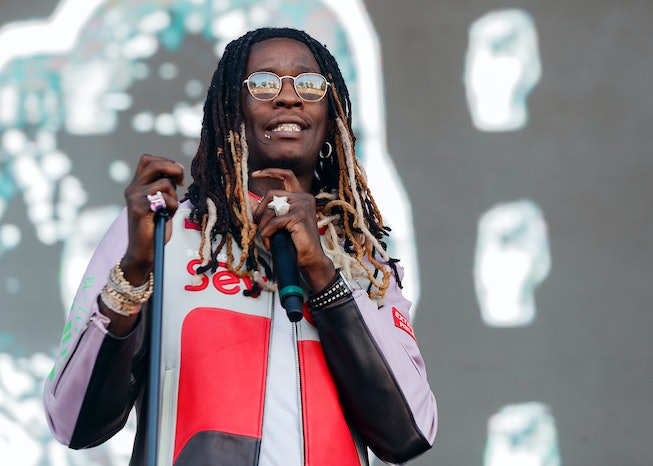 This past week, Young Thug, Gunna, and 26 other associates affiliated with Young Slime Life were arrested for alleged gang-affiliated activity. The high-profile case is already shaping up to be a major high-stakes battle, encompassing a sweeping 56-count indictment by the Fulton County District Attorney’s office in Georgia, and the possibility of devastating consequences for the influential rappers and the rest of the defending party.

The available details surrounding the case are already proving themselves to be complex, citing lyrics, social media posts, and alleged past activity dating as far back as 13 years ago. Below, we break down all of the important facts to know about the case — and the consequences that could stem from it.

Young Thug and 27 others indicted on 56 counts

Per the New York Times, Young Thug was arrested at his home in Atlanta on Monday on suspicion of gang involvement and conspiracy to violate Georgia’s criminal racketeering law (RICO). Alongside 27 of his other associates of Young Slime Life — which officials are categorizing as a criminal street gang with ties to the Bloods — Thug, real name Jeffrey Williams, has been named in a 56-count grand jury indictment which accuses some of its members of alleged violent crimes including attempted murder, aggravated assault with a deadly weapon, armed robbery, and other alleged offenses dating back to 13 years ago.

Fellow Atlanta rapper Gunna was also named as part of the indictment of violating RICO laws, however, was not in police custody on Monday.

In the indictment, some of the charges centered around a 2015 event in which Williams allegedly rented an Infiniti Q50 sedan from Hertz that was later used in the murder of a rival gang member, Donovan Thomas Jr.

According to CNN, prosecutors paint a picture of Williams as the mastermind behind the event and leader of the YSL gang, mentioning another occasion in which two members allegedly had to gain Williams’ permission in an attempt to murder rival gang member and rapper YFN’s Lucci while he was in jail.

Gunna later turned himself in to police

While Gunna was not in police custody on Monday or Tuesday despite being named as part of the indictment, the rapper reportedly turned himself into police Wednesday morning, Entertainment Weekly reported citing a Public Information Officer at the Fulton County Sheriff's office.

Real name Sergio Kitchens, Gunna has been charged on one count of violating Georgia’s Racketeer Influenced and Corrupt Organizations Act.

Prosecutors have already begun citing Young Thug’s lyrics as well as past social media posts as indications of criminal activity.

The use of rap lyrics in legal proceedings has a long and controversial history. While many artists and legal proponents disagree in its use in legal cases, that hasn’t stopped prosecutors from alluding to them as evidence of real life wrongdoing in previous cases.

In the 2019 high-profile case against Brooklyn rapper 6ix9ine, prosecutors questioned the rapper about his lyrics in his hit song “GUMMO.” Prosecutors also attempted to use lyrics by Los Angeles rapper Drakeo The Ruler in his 2017 legal proceedings. And while rapper YNW Melly’s trial is still ongoing, his lawyer believes prosecutors may use his 2017 song “Murder On My Mind” as support for his double murder charge.

The RICO charges could be devastating

As previous cases have shown, RICO charges could have devastating consequences for Thug, Gunna, and the rest of the defendants. The RICO act was enacted in 1970 during the Nixon administration and has been used to combat a variety of organized crime, including prosecuting mafia activity and more.

According to a local Georgia news station, the state’s specific RICO act only requires the state to prove that a group of people has committed two or more crimes that results in a pattern of racketeering activity. A conviction under Georgia’s RICO act can range from a 5 to 20 year sentence in prison, fines, or both — for the RICO charge alone. There’s no telling what else could be added on top of that from all the other additional counts.