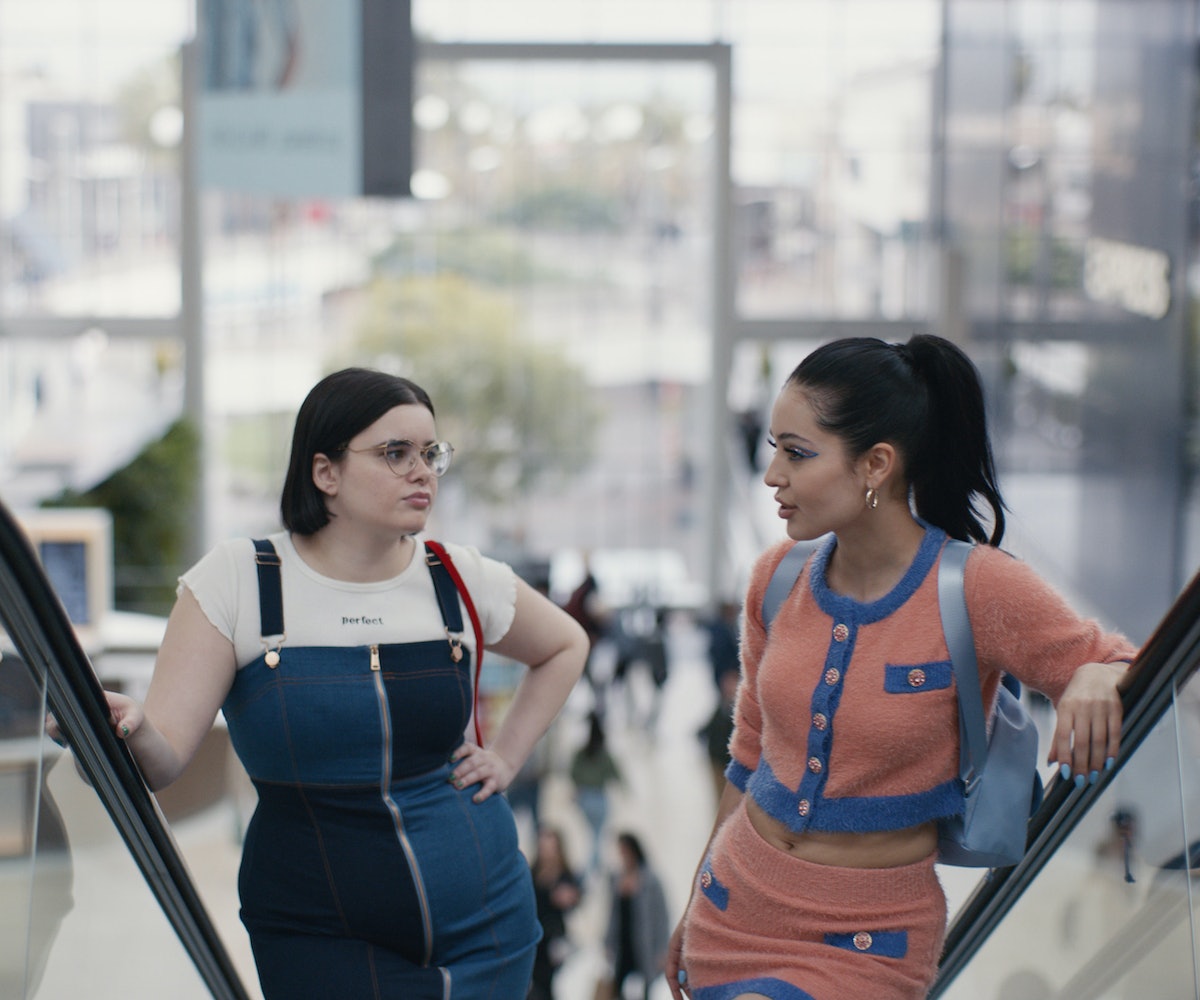 When people say that HBO's new Zendaya-led teen drama, Euphoria, is triggering, believe them. In the pilot alone we're introduced to Rue (Zendaya) and her drug addiction issues via a graphic depiction of the overdose that sent her to rehab. Then, there's the disturbing rough sex scene featuring Jules (Hunter Schafer), a teenage trans girl who has just moved into town, and a middle-aged man she met on Grindr. Oh, and don't forget the unchecked, toxic masculinity of uber-jock Nate (Jacob Elordi); or the body obsession of his sometimes-girlfriend, Maddy (Alexa Demie). For me though, the ultimate trigger came via Barbie Ferreira's character Kat's experience, as she dealt with and internalized a vicious form of fatphobia.

Kat—almost alone amongst her friends—seems self-assured and dismissive of the idea that any high school drama should be taken too seriously. "You just need to catch a dick and forget about your troubles," Kat tells Maddy, following the latter's recent breakup with Nate. But internally, Kate craves male attention, and resents the fact that she's the only virgin she knows; she hints at this when she tells Maddy that she'd "settle for, like, four Corona Lights and some non-rapey affection," from a guy—any guy.

The scene shows the fine line between being an empowered young woman deciding what to do with her body, on her terms, and being a teenager who thinks she's in control but doesn't fully understand the power dynamics at play. Because, yes, Kat is trying to make an intentional decision about her sexuality and how to use it, but she's doing so with a group of boys who don't value or respect her. This reality is made clear when one of them says to her, "You know what they say, right? Fat girls give the best head."

At those familiar words, I melted into my couch and said a silent prayer of gratitude that I wasn't watching Euphoria in the company of anyone else. Onscreen, Kat, too, shrinks ever so slightly into herself, all while trying to keep a poker face about the whole thing. We don't see exactly what happens in the room, but, later, she seems happy when she shares the news with her friends that she's lost her virginity; even though she then lays down, awake, scrolling through the guy's Instagram, seeming altogether less than happy.

Kat's isn't the most violent or necessarily the saddest story line in the episode. But it showed the ways that issues like consent, toxic masculinity, substance abuse, and body image—all of which are difficult to deal with no matter what your size—are further magnified when experienced through the additional trauma of fatphobia. This is something with which I've personally dealt, and so I felt my past experiences rise up inside me when I watched how Kat couldn't build her own sexual identity without being constantly aware of the ways her body exists outside the parameters of acceptable desirability.

My childhood and adolescence are defined by my experiences as a fat girl; it was a time that often felt like a hazy battlefield, when I could hardly navigate which feelings and thoughts were my own, and which ones were the result of outside forces. My body hardly ever felt like mine, and it took years to develop the autonomy that Kat is grasping at as a teenager. Kat, like so many other fat women, has a total lack of support from her peers when it comes to body image and acceptance, and there's a devastating absence of affirmation about her own worth and the importance of her pleasure. Because of fatphobia, Kat is going to be swimming against a strong, but invisible current as she navigates the already fraught social politics of high school. It's one thing to grasp this truth on an intellectual level, but letting those principles guide your decision-making is truly difficult—even for an adult, let alone for a teenager.