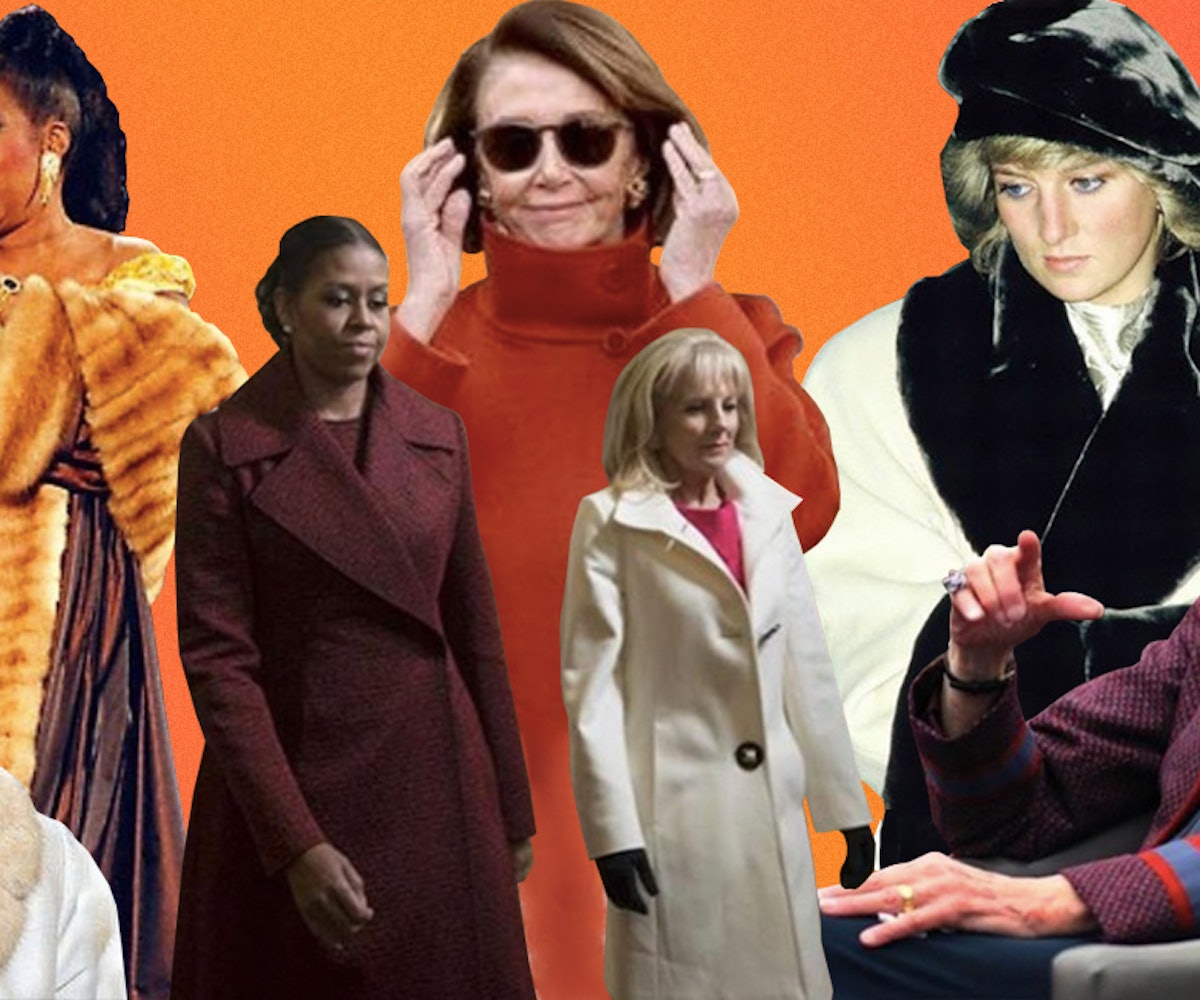 Last Tuesday when Nancy Pelosi exited a fiery White House meeting in an equally fiery-hued coat, two things happened: Her outerwear quickly went viral, resulting in the brand behind it, Max Mara, announcing that it plans to reissue the coat in 2019; and a tweet by author and comedian Sara Benincasa, that read, "Oh man what a day for excellent coats on irritated women," made the internet rounds.

Like most things that go viral, Benincasa's tweet did so randomly and unexpectedly. She then took that moment to create the next iteration in internet virality: an Instagram account dedicated to and expanding on the initial tweet. "In just about four days it hit 6,000 followers, and it keeps growing," Benincasa tells us. "It's great fun, and it's a way for me to learn about history and fashion through the submissions of enthusiastic followers of all genders."

Posts so far include pictures of Shirley Chisholm in a fur-lined white coat, Alexandria Ocasio-Cortez in a navy peacoat on the subway, and Frida Kahlo in a sharp suit and vest. The account, as outlined in its bio, is centered around women in fabulous coats, but it's also about more than just that. By centering it, specifically, around public figures who appear to be "all out of fucks," Benincasa has managed to tap into a collective anger most women are feeling right now. Not just at "the way this administration talks down to women and denies our right to control over our own bodies and reproductive choices," as she puts it, or "the sex criminal in chief and his merry band of enablers," but also at the "man at work explaining to you some shit you've done 1000 times before" and "about one's stability or mental clarity being questioned simply because one showed emotion or asked for help."

So, then, why coats? Why not just create an Instagram account of these women accompanied by quotes displaying their frustration? Because, as Benincasa explains, a coat—and clothes in general—act as a person's armor and help to protect you from outside elements. "It keeps you warmer and safer," she says. "It can literally be a lifesaver. And you can look fucking amazing in the right cut and fit. So, ferocity and fashion combine to make a fun stop on someone's scrolling adventure." Benincasa has also, in less than a week of the Instagram account's creation, done something pretty unprecedented on a page meant to entertain: She broke the internet's fourth wall and opened up about her mental health struggles.

It's not uncommon territory for anyone familiar with her work. Her first book, Agorafabulous!: Dispatches From My Bedroom, is a memoir about dealing with her agoraphobia, panic attacks, and suicidal depression. Her fourth book, Real Artists Have Day Jobs, is a collection of nonfiction essays about mental illness and other struggles that artists face. And, she tells us, she just wrote a pilot called "Codependent As Fuck" about an emotional affair with two people who aren't taking care of themselves physically, emotionally, spiritually, or psychologically. "My aim in everything I do—books, scripts, magazine articles, jokes onstage, whatever it may be—is to help others feel less alone," she shares. "Of course, this also helps me feel less alone! Folks of all genders are coming to this account for entertainment and laughter, but some of them are struggling. If some random lady on the internet can occasionally interrupt the coat talk to say, 'Hey, it's okay to feel your feelings, that might help a viewer just a little bit that particular day.'"

Check out some of our favorite posts below.