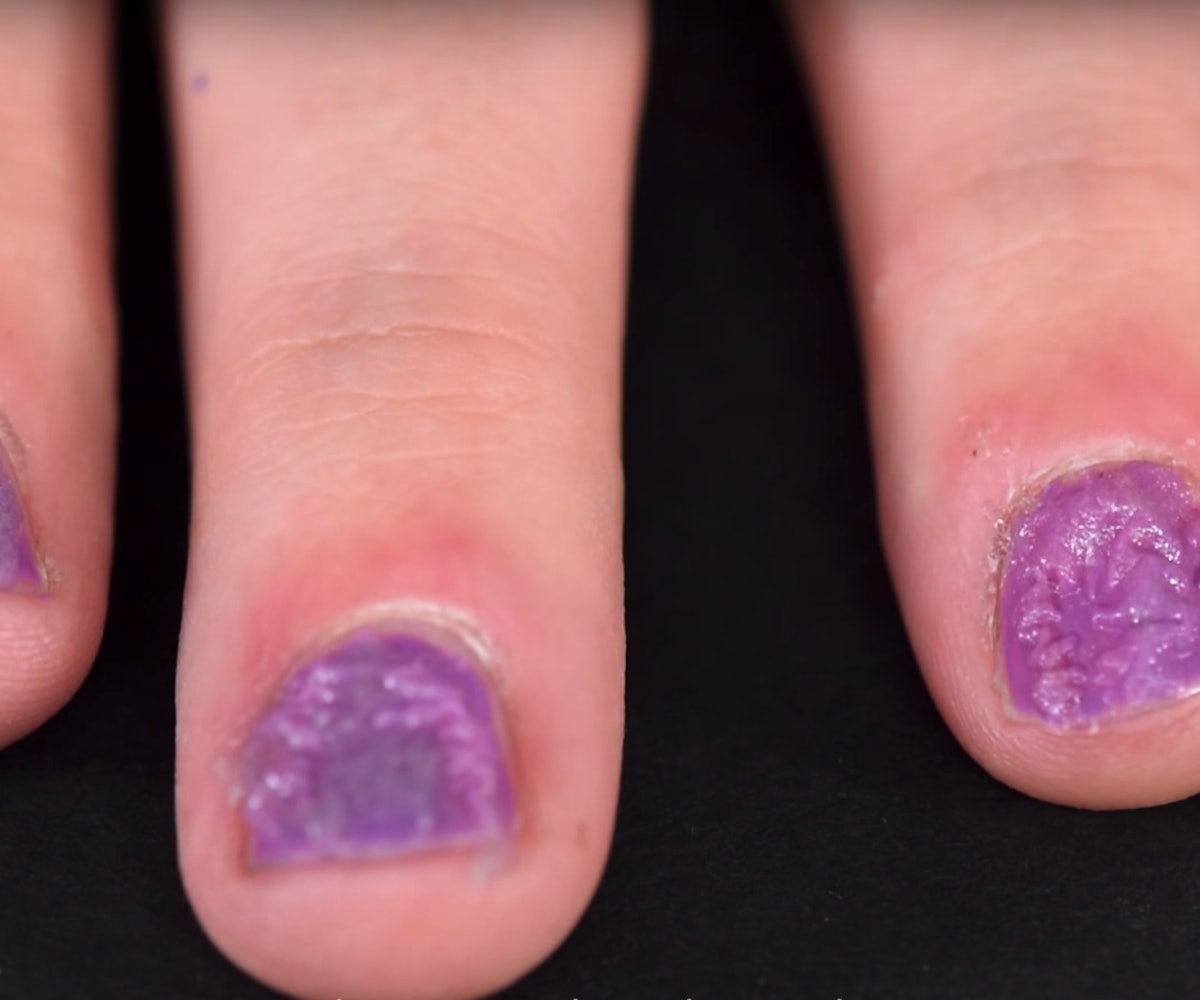 In a recent video posted by beauty YouTuber Cristine Rotenberg (known to the interwebs as Simply Nailogical), the nail guru decided to test drive an "exploding nail-polish remover," which appears to dissolve nail polish upon contact, making it easier to remove. It's the kind of weird product that feels right at home in the viral Facebook video world—equal parts satisfying and misleading.

To test the product, Rotenberg purchased six different bottles—all of which appear to be the same product sold by various companies. Upon receiving, she notes that the polish bottle smells a lot like paint thinner and has no listed ingredients. She was also unable to find the ingredients listed on the bottle or on Amazon where she purchased the product, a major red flag. The listing did warn that one should avoid getting the product on the skin, which is more alarming still. When Rotenberg reached out to the various companies to ask about the ingredients, most suppliers declined to share. The most robust answer came from the FAQ list of the most popular supplier—Vanish Polish–who claims the product is made from natural resin, cellulose, and deionized water. Rotenberg is (rightfully) skeptical of the claim, as none of the ingredients seem to be able to cause the "exploding" reaction.

"Personally, I'm pretty suspicious of all of these products," she says in the video, "And I think it's really important to point out that I have yet to see a bottle by any brand name with the ingredients actually listed on the product. And that makes me question if this stuff meets any cosmetic safety regulations." She also shared screenshots of posts from people in the nail-polish industry who claim the product is actually a harmful industrial-strength solvent and doesn't contain any of the ingredients listed.

Despite her reservations, Rotenberg goes on to test the product—but not on her own nails. She opts to try the remover on a false nail instead, which is definitely better than running the risk of exploding her own nails. She tests the solution on both gel nail polish (which the product is intended for) and regular polish, and although the remover has no effect on the gel polish, it does make removing the regular polish easier—albeit gunky and messy.

She also tested the remover on a human subject, her boyfriend and frequent guest star, Ben, using various combinations of nail products. The winning formula was gel polish with no top coat or base coat, which did produce the "exploding" results. Luckily, there was no adverse reaction, but that doesn't mean it's safe, either.

You probably shouldn't try this at home—seriously, it's simultaneously sketchy and dangerous, but admittedly, the video is pretty entertaining to watch.