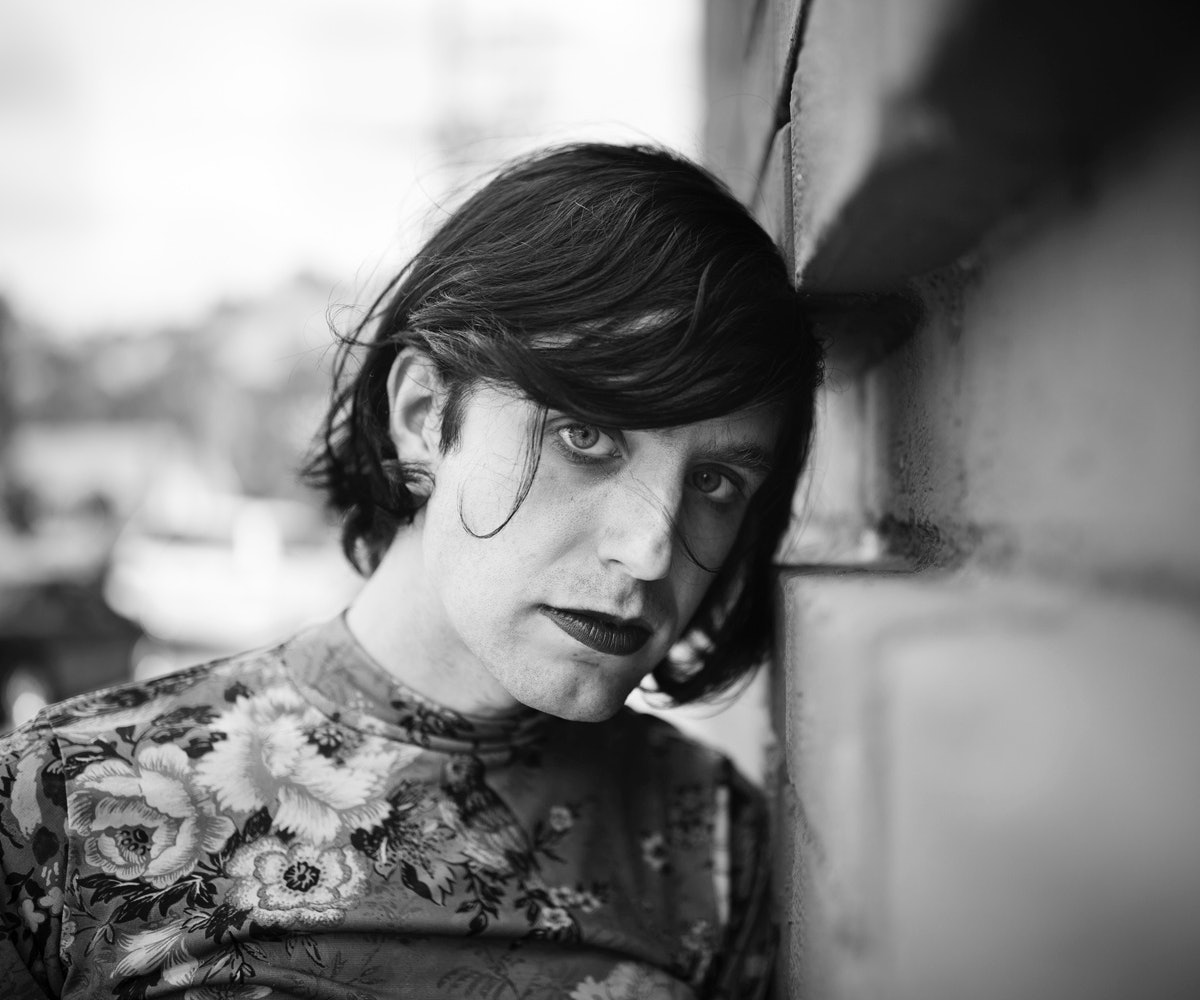 Ezra Furman is making his point loud and clear: The time to act is now. Through his under-30-minute-long new album, Twelve Nudes, the Chicago-born musician is getting vocal about what means the most to him, using "language and tone, rather than music," to amplify his message. Ahead of its release,I talked with him about climate change, trauma, and the making of this "spiritually queer" punk record.

After a long and difficult tour, Furman spent the summer of 2018 listening to punk music while riding his bike around West Berkeley, California. The combination of punk soundtracks, leftover tour energy, and anger about the worsening state of the world led him to write "My Teeth Hurt," track nine on the new record.

"Listening to songs is like eating and writing songs is like vomiting," he explains. "You're putting a ton of stuff in, it combines in unpredictable ways, and comes back out in a big mess." With that song and his anger pushing him forward, he spent the rest of the summer writing this, his first punk record—a big change from his previous more tender, indie albums. Although he always knew he could make an all-out punk record, Furman says he was kind of afraid to make the jump. "But I've gained some confidence," he tells me.

Last year was an angry year for Furman, who remembers emergency news alert after emergency news alert sent to his phone. Between climate change—the almost-title of the album—and the refugee crisis, the urgency of the what's happening in the world around us could no longer, he felt, be denied—or ignored. "I started to feel like I needed to openly admit how bad it looked and stop saying, Everything's going to be okay," he says. "I don't know if everything's going to be okay." As a firm believer that his job as a musician is to tell his truth, Furman knew the next album had to address the alarm bells he could not stop hearing: "I can't keep hitting snooze. I need to feel these bleak feelings in order to respond appropriately."

What was born in response was Twelve Nudes. The title was inspired by Canadian essayist, philosopher, and poet Anne Carson, who calls visions that help deal with pain "nudes." Furman's songs are exactly that: meditations on pain. The song that most encompasses the pain Furman felt in his writing, the "thesis of the record," is "Trauma," a reflection on hyper-capitalism, Brett Kavanaugh, and Donald Trump. He says the song was inspired by "the rapists and assaulters not facing any consequences for being rapists or assaulters."

"It is connected to the poor get screwed, and the rich get away with it. And this stuff doesn't go away. It lodges in everybody's cultural psyche and trickles [down] through behaviors and attitudes," he adds. But even with the bleakness of the song's subject, Furman hopes "Trauma" will help empower victims, with lyrics like, "What makes a girl start a fire in the hall/ Leave a lipstick scrawl on the bathroom mirror?" However, Furman shares that he fears the depth of what he wrote, comparing singing the words to picking up "glowing hot coal." "I'm playing with words that I'm still feeling," he explains. "I'm still discovering how deep some of those words go."

On "I Wanna Be Your Girlfriend," Furman opens up a more personal wound, one inspired by pain and rejection that has been difficult for him to talk about. Layered over a less punk, more '50s-inspired sound, Furman sings lines like, "Honey, I know that I don't have the body you want in a girlfriend/ What I'm working with is less than ideal." The raw lyrics make more explicit the queer perspective of his music, which some people "may not even catch for whole albums." In the song, Furman, who identifies as gender nonconforming, talks about applying for a job that he fears he's not qualified for: girlfriend. He reveals that in both his music and personal life, he feels an "'it's me against most of the world' feeling that involves a lot of suffering," one that has also trained him in defiance and standing up for himself. "It's that pushing against that repression in a lot of this music," he says.

With the release of this vulnerable album into the world, Furman can rest easy about his near future. In addition to his upcoming fall tour, Furman shares that he's continuing to write songs. Although he's recently been met with an influx of fans due to his hit soundtrack for the Netflix show Sex Education—songs that he promises will at some point be released—his main goal right now isn't for the audience to keep getting bigger. "More visibility is more power, but more vulnerability," he explains. What he most hopes for himself is to get deeper with his music, to have songs that "feel as intense as it feels for the experiencing individual speaking those words... How can I make a record that matters more to somebody and does the thing that the best art does, which is make being alive seem more vivid, higher stakes, and more beautiful?"

In regards to the world's future, although Furman frequently worries about climate change, calling it "another trauma we're going to have to deal with," he doesn't see our destiny as entirely dismal. Our first step to improving our reality? "Make human dignity and safety our first priority." As for his role, he plans to continue to use his platform to real-time address and encourage others to work toward a better future, because change is "powered by the way people talk and feel."

Furman hopes that if fans get anything out of Twelve Nudes, it's that they are inspired to become activists. "For whatever cause they choose," he says. "But may I suggest dealing with climate change and passing a carbon tax?"