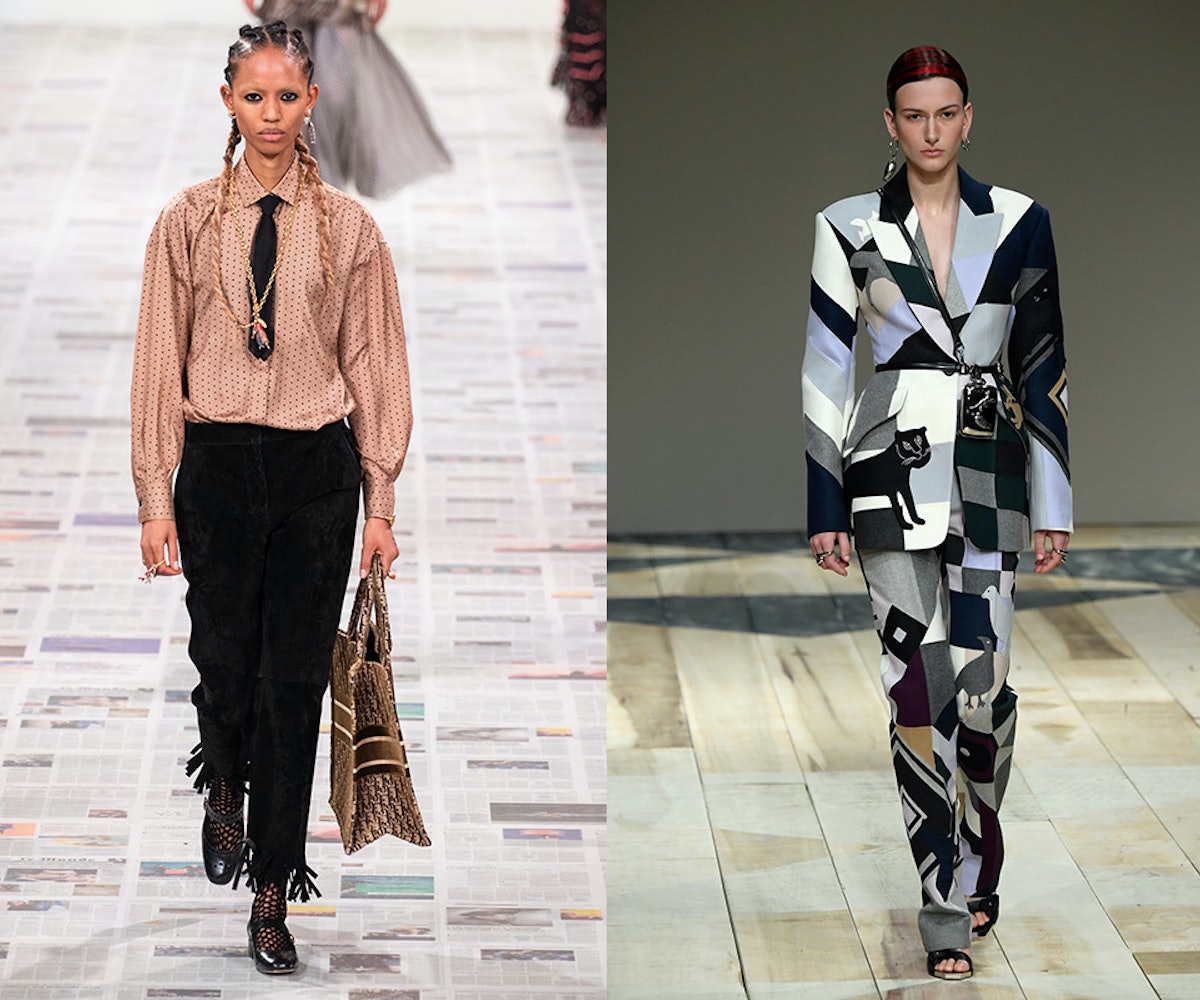 Now that fashion week has wrapped in London, Milan, and Paris, it's time to start breaking down which Fall 2020 trends from Fashion Month popped up all over the runways.

Much like what we observed during New York Fashion Week, the great thing about this upcoming season's top looks is that most of them are easily accessible to wear right now, or you can conveniently wait until fall comes around again to try them out. Take, for example, the tie that was spotted at Prada and Dior, among others. You can probably test-drive this prep school-ready accessory very soon if you wanted to: Give it a go the next time you wear your favorite baggy blazer. (Just make sure you have a collared shirt on hand as well, unless you want to channel Avril Lavigne circa 2002.) And speaking of blazers, do you happen to own a belt? Then you already have another trend down, since wearing a belt over a blazer was co-signed by the likes of Versace, Chloé, Miu Miu, and more.

Plus, a few trends that have been popular for some time are back again, though with a few sartorial updates. We noticed shades of greenery on the runways that are softer in color than the previously trending bright slime green. Quilting, too, which is often seen on outerwear — but has now been applied to dresses, thanks to Balenciaga and Kwaidan Editions.

Check out the eight best trends to come from the Fall 2020 shows in London, Milan, and Paris, below. See you next season!

Spoiler alert: This particular look was already a hit in 2019. But that just goes to show how much staying power the belted-blazer trend will have through 2020. We like the updated idea of wearing a belt bag, as seen at Prada, or knotting a longer belt, like at Altuzarra and Miu Miu.

We're going corporate with the suiting aesthetic. Designers are adding ties (ties!) to the mix, including Dior, Preen, Prada, Kenneth Ize, and Rokh, in a variety of classic prints and colors. Preppy style lovers, rejoice; this trend has your name written all over it.

While New York's designers are keen on wearing ponchos for fall, the European shows took a more tailored approach. We saw capes of all kinds on the runway, from a gray structured version by Salvatore Ferragamo and a trench-inspired style from Rokh, to statement options by Erdem and Ermanno Scervino.

It seems like Pantone's color of 2017, dubbed greenery, is already making a comeback. We saw all sorts of green shades on the runway, like Chanel's minty hue and a green-leaning version of Spring 2020's trending chartreuse color from Erdem and GCDS. Don't confuse this with slime green, though, which is much more neon than what you see above.

As sustainability continues to become a driving force in fashion, upcycling has turned into a business for some brands and inspiring high-end designers, too. Patchwork pieces popped up on the runways of Marni, Kenzo, Alexander McQueen, and more, from vintage-looking coats to suits, dresses, and skirts.

Who knew the disco ball could be a fashion muse? Full-on silver gowns and cocktail dresses were on a number of designers' minds, like Riccardo Tisci for Burberry, Julien Dossena for Paco Rabanne (the creative director's specialty), and Donatella Versace, who had Kendall Jenner close Versace's show in a metallic mini-dress.

Similarly to patchwork, designers are looking to traditionally crafty techniques for their new collections. Quilting is an obvious one, and brands experimented with it in a number of ways — from Balenciaga's floral and ruffled dress to a more polished shirtdress from Kwaiden Editions. Quilted outerwear is already on the rise, with Burberry and Chloé joining in on the trend, too.

Fringe isn't just for western jackets and festival outfits anymore. Designers tried their hands at dressing up this swingy embellishment, adding it to skirts, dresses, and even underneath a suit jacket. While we can't promise there won't be any wardrobe mishaps when trying this trend, we can definitely assume there will be plenty of twirls and photo ops.