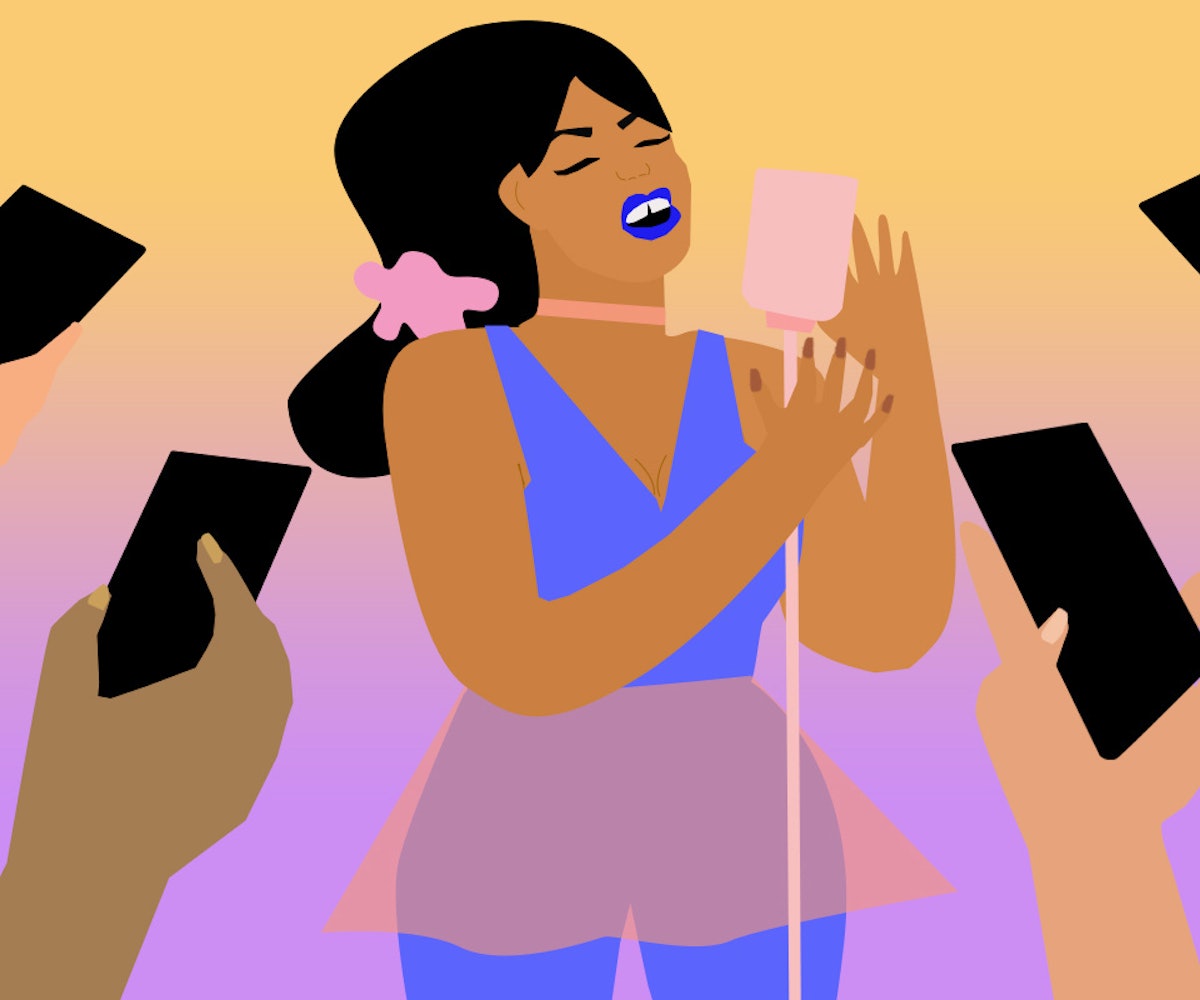 Be grateful.Don't be a diva.Appreciate the attention. These are sentiments female musicians often hear. The logic goes: Your fans gave you your fame, so you should give them your love.

But this kind of toxic entitlement is dangerous; particularly for women artists, it can warp into harmful experiences, often connected with the artists' pre-existing socialized, gendered guilt. That's why, when Lucy Dacus tweeted about wanting firmer fan-musician boundaries in May, she followed up with an apology, writing, "I am constantly worried about coming off as a diva."

What boundaries had she attempted to draw that might do that? Don't come into the green room; don't wait by the van; don't follow her. She prefaced these requests gently, "with love."

"There are plenty of concert goers who believe that the cost of their ticket grants them access to the artist, not just access to the show," Lucy Dacus told me via email. "Music is magic, yes, and many people use it as an outlet for their animal emotions, but I just wish people would let loose their feelings while still keeping their behavior under control."

Dacus cited a number of examples where fans went over the line: A group of men waited at the arrivals terminal when she landed at an airport (she doesn't know how they had her flight information); a woman hooked a finger through Lucy's belt loop and asked where she was sleeping; fence-hoppers entered a green room and told her, "We're in love with you, we had to meet you."

Independent musician and Dacus's co-member in boygenius, Phoebe Bridgers, delved deeper into fans' cognitive dissonance with a retweet: "I was once chased by a full grown man after a show as he shouted 'I would never chase you.'"

"Part of the reason the ecosystem of fandom works is because there are boundaries, because people can imagine the life of someone they adore without having an intimate place in that person's life," cultural critic Hanif Abdurraqib explained to NYLON. "I do think that there are differences between genuine moments of excitement and obsession… for some people, I think it's maybe hard to separate those two."

As much as we may want to call excessive fandom—to the point of online harassment or in-person stalking—a phenomenon, that belittles its intensity and frequency. Women and queer people across the independent music scene are particularly vulnerable to these instances.

"Being an independent artist, what you're doing is oftentimes more emotionally accessible to people in a way; because oftentimes independent musicians are writing and producing their own music, it feels very much like just them singing from the journal," Allison Crutchfield, a solo artist who has played with Swearin' and P.S. Eliot, said. "It's obviously an incredible honor to feel like someone is connecting with anything you're saying artistically, but it can also get really, really intense really quickly."

"I just wish people would let loose their feelings while still keeping their behavior under control."

Music critic Sasha Geffen called this phenomenon "asymmetrical intimacy," where "the musician has no idea who you are, but you're already in on their life. It's easy to build a fiction in your head where you guys are best buds, even if you've never met before."

"You're still a part of the real world when you're interacting with artists," Kississippi member Zoë Allaire Reynolds—who told me she was once drugged during a music festival she played—said. "If you can't be respectful of people's space, don't occupy it."

Georgia "Maq" McDonald, the lead singer and guitarist for Camp Cope, has had fans cross the line, both physically and emotionally, asking her "fucked-up things about the content of my songs, because instead of my songs being allowed to be a song, people think it's this big insight into my life and they can figure me out." She added: "Sometimes I feel like people see me as public property rather than a person like anybody else."

Misogyny and harassment are closely tied to this phenomenon of inappropriate fan behavior. Kily Lotz of Petal mentioned one instance, when as she sold merch, two men in line offered her a beer and she politely declined, citing several reasons: She was working, she'd rather they drink it on her behalf, she didn't see who opened it. Their aggression increased until one man grabbed her wrist, at which point her tour manager took over.

Social media can also warp perceptions of musicians, whether that means imagining intimacy or reaching out seeking acknowledgement or advice. Some fans will DM their own life stories, which a musician may not be emotionally prepared to respond to.

"The therapy-tinted interactions are the ones you want to go about really carefully… I'm not equipped to help people I don't know with things that are really really personal to them," solo artist Sidney Gish said. "I envy people like Daft Punk, because people who are obsessed with them probably just message them 'bleep bloop.' Their music touches people just as much as other genres of music, but they don't expect to talk to the robot guy from Daft Punk and expect him to do anything other than project a heart onto his screen."

Geffen thinks that indie music, because of its lyrical intimacy, changes audience expectations.

"When you hear someone singing, whether it's at a concert or on records, it can feel like this is someone you know who is communicating directly with you," Geffen said. "Music has this weird potential for intimacy that not a lot of art has in the exact same way."

And audience boundaries warp in the face of this intimacy and admiration. A number of artists reminded me—it's easy to forget—that for them, playing a show is work. Add to that the isolation of tour, where a musician has been away from home, missing loved ones, subsisting on Chipotle, spending their time in a van or a green room scrolling Instagram. They're exhausted.

"There's definitely this feeling of major anxiety and a kind of pit that goes in your stomach when you're loading out and there's people by the van," Crutchfield said. "As much as the level of fandom is totally appreciated... you can't overlook the fact that you feel so anxious and you specifically didn't go out into the crowd because you don't feel like talking to a stranger [after the show]. It just feels like an invasion."

So how do we respect musicians' boundaries? The general consensus is: Read the situation. This means a number of things, which does vary by artist: not interrupting a conversation; not stopping them if they seem hurried; keeping conversations brief; not expecting reciprocity or advice; not following them or taking pictures from afar; asking consent before taking images or touching them; leaving a brief letter at the merch table instead of seeking them out; making sure that if they want to get out of a situation, they can.

And still, the musicians I spoke to clearly felt guilty about the boundaries they want erected that are so frequently ignored.

"At the end of the day, it's not bad to talk to artists and to have a conversation with them and to message them. But if you're literally going to chase someone, you need to reconsider," Gish said. She never wants to discourage fans from reaching out to musicians, but Gish struck a powerful point when she added, "If you saw a mall Santa in a men's room, would you try to sit on his lap?"

"There aren't many good examples of how artists and fans should interact, in fact, the examples we have from media are usually actively harmful, on both sides," Dacus said. "It teaches fans that there may be payoff for obsessive behavior, and it teaches musicians and aspiring musicians to look forward to constant fawning… Every fan interaction is a gray area. It's hard to know what to do. I'd say only 20 percent of the time, I walk away from meeting a fan feeling good about it."

Geffen's approach? Going scorched earth on a male-dominated industry. They noted that "the models that are available for musicians to survive are very broken and depend on very weird power structures."

"The purpose that harassment serves is to get women out of positions of power, and the spot on the stage is a kind of power… maybe some men don't know how to process the idea that a woman is louder than them in any given time, so they lash out," Geffen said. "Also, that can get mixed up with desire. If they're looking at a woman, they might think that she's there for public consumption, and so they may think they have a right to follow her and intrude on her space after the fact."

McDonald pointed out to me that it takes a lot of emotional labor to have these conversations about assault, safety, and boundaries—conversations male artists rarely have—wherein female musicians want to explain how they feel unsafe without isolating harmless, loving fans.

"I don't want to be called a diva, I don't people to be intimidated by me, but I also don't want to be walked over and used like a commodity. I want to be as gracious and open as possible, and that ability changes all the time," Dacus said. "I am really grateful people care, I still don't get how that happened, but I want listeners to remember that everyone, including myself, is subject to change. I'll probably be different from the time I answer this question to the time it will be published."