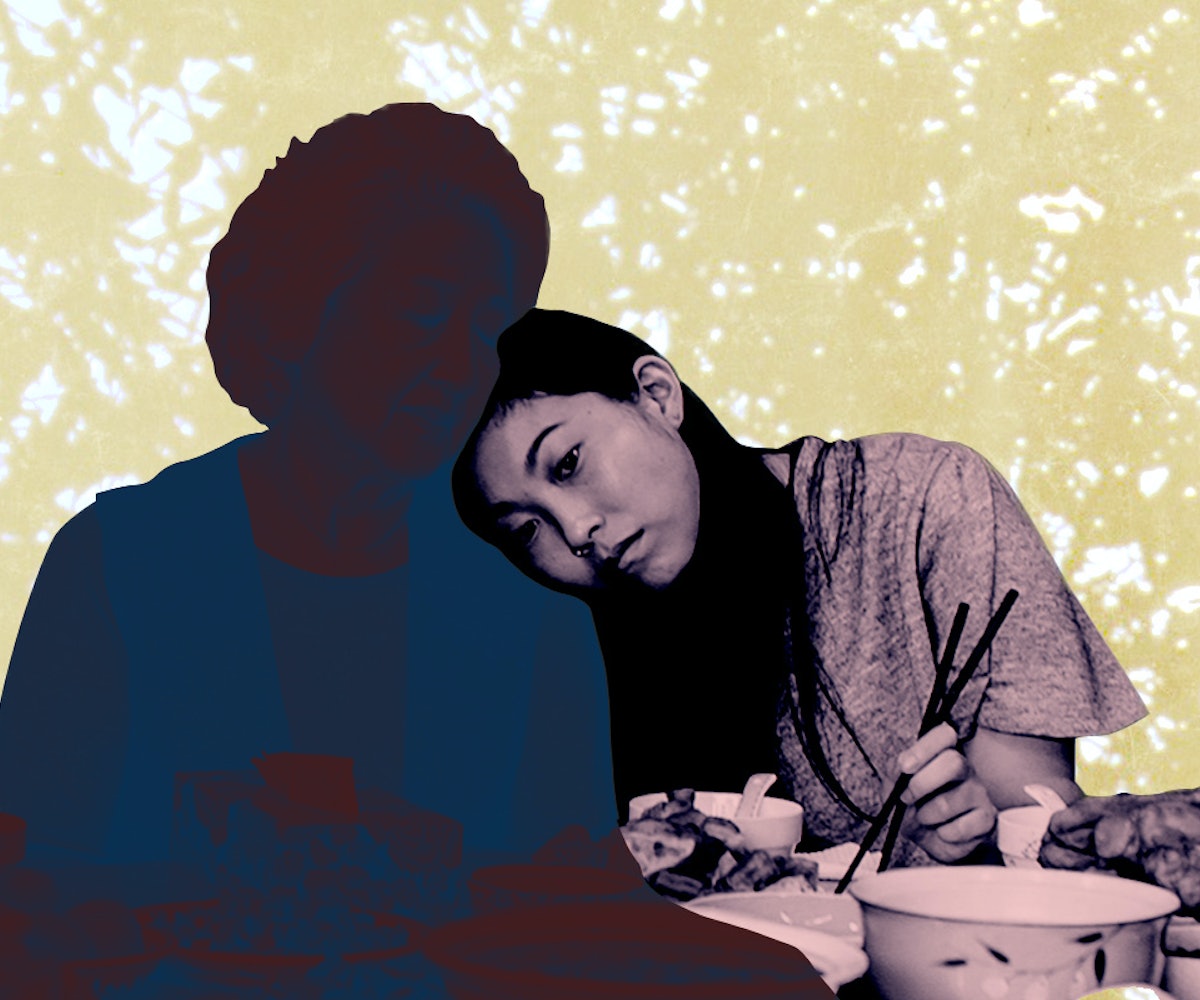 I wasn't much older than the six-year-old Billi (played by Awkwafina) in Lulu Wang's The Farewellwhen I left my parent's birth home—Moscow, Russia—for good.

For the last 12 years, I have been in the U.S. on my own, having first come for college and then staying on to work. Before that, I'd lived in Dubai with my mother, with only my childhood years having been spent in Russia. My memories from that time involve trips to the theatre, summers in sanatoriums(Soviet-era wellness resorts)with my grandmother, and train trips from Korolyov—a city about an hour away from Moscow's city center, where I lived with my grandmother during the week—to Moscow, where I would go to on weekends to live with my full-time-working parents.

Unlike most grandmothers, including Billi's Chinese Nai Nai, my babushka was a terrible cook. Still, she would cook what she could as a way to show her love. She would make me instant Kharcho, a traditional Georgian soup, out of a bag for lunch, and we ate more pan-fried potatoes and sausages than I would like to remember for breakfast. For as long as I can recall, she warned me against eating mushrooms (which, if you're Russian, is a food that's impossible to avoid), so convinced was she that even store-bought ones could be poisonous, like the ones she grew up trying not to pick in the forest. (Once, when she was babysitting me, she scooped out the filling out of the mushroom blinis my mother had left us in the fridge before serving them to me empty for lunch.) For dessert, she would often serve a piece of butter jammed between two square-shaped sugar biscuits, a delicacy by the USSR standards that she grew up with and a treat with which I was obsessed as a child; we would eat them while watching our daily telenovela dubbed from Spanish.

Still, what she lacked for in the cooking department (or television choices), she made up with her love for me. She would often fondly recall the first time she met me after I was born in Denmark (we moved from there back to Russia not too long after I was born). According to her, I didn't cry, slept through the nights, and lay in bed awake until someone got me in the morning. Sharing the room with me, she would lay in bed and observe me as I observed the world. She would also remember how when I started speaking, I did so in three languages. Most vividly, she would remember the few years I lived with her in her apartment in Korolyov, when she would wake me up for kindergarten while I would protest vehemently before, minutes later, being dressed and ready to go (I was always a stickler for time); we would walk together to kindergarten, where she would drop me off before heading to a nearby school, where she taught English. Her education of me consisted of etiquette lessons, including how to answer the telephone (by announcing the name of the household), how to speak to adults in stores like an adult, and to sing, dance, and talk in English on demand for her and other family members as a sign of love. I would have similarly not dared to object if my babushka told me to give a toast at the fake wedding of my cousin, the excuse the family members of Nai Nai, who doesn't know she is dying of cancer, use to gather together to say their goodbyes.

Over the course of my years in Dubai and the U.S., I slowly became more and more alienated from Russia. Especially now, it takes me a while to get used to speaking entirely in Russian; when I do, I often forget the word in Russian I am looking for, and my family then makes fun of me for being "too American." In America, people usually can't tell I am not from here; in Russia, people often mistake a speech impediment that I've had since I was a child for an accent, a sign that I've been away for too long.

And yet, in America, I am not home either; in fact, people often point out "how Russian" or "international" I am. In TheFarewell, when Billi checks into a hotel, an attendant asks her if she likes America or China better? "It's different," she says. I've often given that exact response when asked the same question about Russia and the U.S. But the hotel attendant presses Billi for a more definitive reply, unsatisfied that she can't give him a black-and-white answer. This is the duality that every immigrant grapples with, the never-ending navigation of two cultures that inform your life, but that often have very vastly different belief systems. What's better? Where do you fit in? In both places? In neither? Can anything bridge the gap between the two cultures?

More than anything else, my grandmother was the link that tied me back to Russia. Whenever I saw her, I was reminded of my roots, how I was raised, the values that were instilled in me. When I moved away, all she asked for was photographs and occasional phone calls. In TheFarewell's opening scene, we see Billi on the phone with her Nai Nai, who asks if she has a "special friend." Similarly, my grandmother would always ask me two questions. The first one, "Have you cut your hair?" referring to my waist-long hair. "No?" she would confirm. "Good." The second being, "Are you married yet?" "No?" she would ask less approvingly. "Hmmm." Despite being with only one man her entire life—who would end up leaving her with two young daughters to start another family—she never gave up on wishing the same love that she experienced for me.

While my grandmother had survived several difficult surgeries throughout her life, a few years prior to her death, she decided to stop leaving her house, and, eventually, decided to stop getting out of bed. No family protests or visits to the doctor would convince her otherwise. She decided she lived a full life, I guess. That left me halfway across the world, knowing that she didn't have much time left. While the thought of losing your grandparent is hard enough, knowing that I couldn't be there for her wrecked me. I felt selfish for being so far away; and yet, I'd had very little to do with the decision to leave Russia in the first place. Not that I regret the move or, given all the opportunities that have been awarded to me, take it for granted; still, though, it's hard when I think about what it is I've lost.

The last time I saw my grandmother, I played along with the lie—not unlike the one the family members of Nai Nai use: I told her she looked great as she lay in bed, despite her being unable to say many coherent words; she mostly just cried from the sheer joy of seeing me in real life. I smiled, made fun of her for crying so much, and drank tea by her bedside as if this was normal, as if I wasn't in shock at seeing her so frail. When I left her home, I burst into tears in the car. "This is the last time I will see her, isn't it?" I asked my mom. When Billi has her (presumably) last conversation with her grandmother, I felt the tears build in me as Nai Nai told her how proud of her she is and handed her an envelope with money. I similarly left with one the last time I saw my own grandmother (despite having no need for it, it would have upset her if I didn't take it).

Months later, the night before my grandmother died, my friend and I unexpectedly stumbled into St. Patrick's Cathedral while walking to Central Park. It was cold outside, and my friend hadn't been to the cathedral in a while. She lit a candle for her mother, who had passed away when my friend was a child; I lit one for my grandmother, who was religious. Then I went to a friend's party, where I found myself feeling violently ill a few hours in, nauseous and unable to eat or drink. I blamed it on being tired, on something I ate. The next day, I got an unusually early call from my brother. I didn't want to pick up the phone: Deep down, I already knew that he was calling me to tell me that my grandmother died. Deep down, I felt a sense of relief that she was no longer waiting for death.

When people in the U.S. hear that I am from Russia, the typical follow-up question is: "Do you ever go back?" Prior to my grandmother's passing, I would say, "Yes, to see my grandmother who can't travel anymore." Following her death, it's a question that I now pause over, as I haven't been back in almost two years and don't know when I will go next; my immediate family travels a lot, so I usually meet them halfway between the U.S. and Russia. With my grandmother's passing, I lost the only remaining connection I have to the place I am no longer from, whose ideals have little meaning to me, and yet whose history informs me every day.

As one of her final wishes, my grandmother asked that I not be at her funeral. I was taken aback; this contradicted my every "American" sensibility of what to do in a situation like this—to say goodbye, to pay respects to the woman who was such a big part of my upbringing. Yet, when I protested, threatening to book my flight regardless, my mother, brother, aunt, and cousin all pleaded with me, saying that she wanted me to remember her as she was when alive. I didn't go. Maybe what she wanted is for me to remember my home as it is in my memory too: happy, loving, and full of biscuits stuffed with butter.

TheFarewell is out in select theaters now.