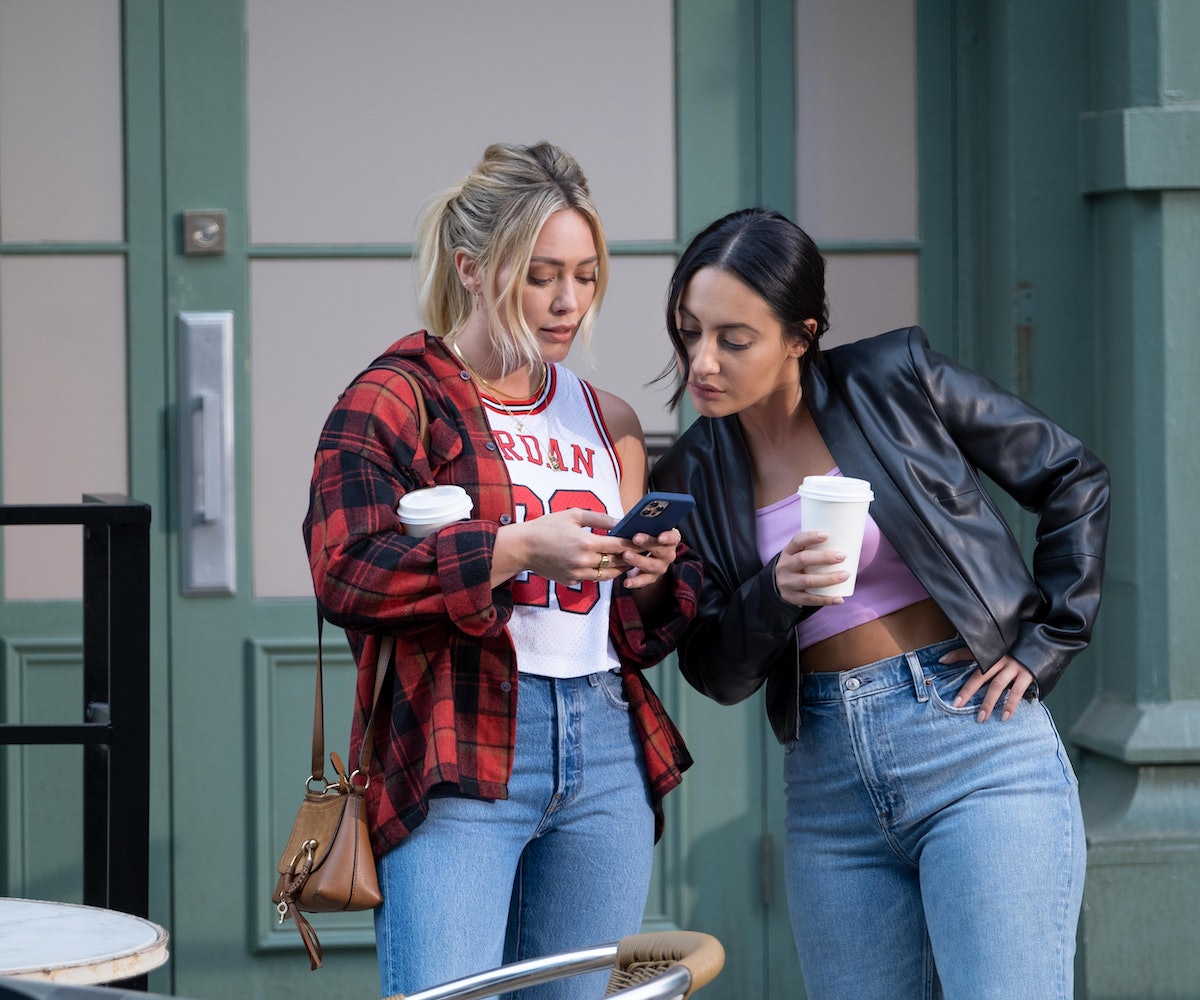 “God, your job is so cool,” New York City photographer Sophie (Hilary Duff) says to her roommate and best friend Valentina (Francia Raisa) in an episode of How I Met Your Father. Valentina just named-dropped “Timothée Chalamet” as part of her job duties as an assistant to renowned celebrity stylist Fred Z — who, apparently, also counts Harry Styles, Jennifer Lopez, Tilda Swinton, and Michelle Williams on his client list.

But after trying to impress some TikTok teens at a Bat Mitzvah (“Imagine what this will do for my brand!”), Valentina shatters Sophie’s — and viewers’ — perceptions about her seemingly glamorous profession. “My job is a nightmare,” she says. “Glamorous things happen around me while I do menial grunt work for a psychopathic stylist.” Instead of accessorizing Timmy, Valentina was actually tasked with removing her boss’s “pit stains” from a borrowed Balenciaga suede jacket.

Real-life, NYC-based assistant stylist Chloé Lucan co-signs. “It's not glamorous,” she says over Zoom. “For me, the most glamorous part is — and it’s not even really glamorous — being on set.” Typical day-to-day tasks include: “Running around Midtown with a whole bunch of garment and shopping bags trying to get to [stores and showrooms] before they close; coordinating pickups; steaming, unpacking on set, and doing fittings.” Her job also entails administrative busywork, like contract writing and financial spreadsheets, which aren’t quite as exciting to depict on-screen. However, that doesn’t deter Lucan, previously a product developer at 3.1 Phillip Lim, from eagerly pursuing her growing career, which now includes lead styling gigs for editorial and campaigns.

Across the country in Los Angeles, now-college senior Zoey Johnson (Yara Shahidi) pivoted from her self-created “The Sociology of Fashion” degree — and even briefly dropped out of fictional Cal U — to style Joey Bada$$ (playing himself) on grown-ish. Further north in Seattle, on iCarly, Harper Bettencourt (Laci Mosley), BFF roommate to the titular social media star and internet entrepreneur (Miranda Cosgrove), set up her styling racks in the shared living room, while realistically supplementing her income as a “Skybucks Coffee” barista.

But, fun fact: Valentina was originally scripted as a makeup artist. “Then, one day, [producers and writers] were like, ‘She should be fashionable,’” says How I Met Your Father’s costume designer Anthony Tran over Zoom. “I feel like it must have just been the zeitgeist, honestly.” He happily took on the mandate for Valentina’s pre-series premiere career change, in which personal style proves integral to the profession. For inspiration, Tran looked to street-style pics, plus celebrity influencers and style stars of the moment, including the Hadids, the Jenners, and the Kardashians.

Revealing glimmers of Valentina’s fashion sense in her off-duty life, Tran dressed her in self-expressive, vintage-esque Selena and Aayliah T-shirts, and lots of trend-driven athleisure, like a pink Nike crop-top under a black Aritzia leather blazer with shorts. “I almost explicitly dressed her in Air Jordan high tops because it felt like it had an edgy cachet in practicality, but was inevitably always cool,” says Tran. The accessory choice also speaks to Valentina’s (off-screen) need to run across town for pickups and returns at a moment’s notice.

For the rare sighting at work, she elevates her look in a lilac cropped blazer and joggers pant suit by Ivy Park, while being berated by Fred Z (on-brand in a Kenzo blazer, Rick Owens cropped pants, and high heels). “It felt like a price point of something that she could afford with the social media value of ‘a drop,’” explains Tran.

Undergrad Zoey effortlessly exhibits her innate style sense, which caught Joey Bada$$’s attention in the first place. “She’s whimsical,” says grown-ish costume designer Michelle Cole, who began her own career as an assistant stylist on Nike commercials in the ‘80s. “Zoey just wakes up and wears a tulle skirt with a jacket, and then socks and slides. That’s just how she feels.”

Valentina (Francia Raisa) of How I Met Your Father.Patrick Wymore/Hulu
Zoey (Yara Shahidi) in grown-ish.Freeform/Tiffany Roohani

“Every time we see Harper, she looks like she put a lot of thought into [her outfit],” says Ariyela Wald-Cohain, who joined the iCarly revival for the sophomore season. “She advertises that she’s an aspiring stylist.”

To telegraph Harper’s unique sense of style, perfect for Seattle’s music scene, Wald-Cohain emphasized distinctive details, like sculptural puff sleeves on a cut-out Zara LBD, and eye-catching embellishments, like a sequin houndstooth crop-top and skirt set by Hervé Leger. Harper, via the actor who plays her, uses her platform to uplift Black-owned brands, too. Mosley, who also hosts the popular podcast Scam Goddess, suggested an architectural grommet-covered dress by Andrea Pitter Campbell to Wald-Cohain.

The iCarly costume designer emphasized pieces that looked like Harper would have custom-designed them for herself, especially now that she left her coffee shop job to style full—time. “She’s still struggling, but she dresses for success,” says Wald-Cohain.

Like the fictional aspiring stylists, Lucan stocks her closet with high-quality, “one-off, statement pieces” that stand out during meetings, jobs, and, of course, the de facto portfolio of Instagram. “Personal image is a huge part of [being a stylist],” she says, citing a yellow quilted trench by Polish label Aggie, a bright paisley-printed set by Marni, and a 3.1 Phillip Lim men’s floral brocade jacket as favorites.

But as we’ve learned from ongoing Sex and the City discourse (and real estate skepticism on Friends), real-life stylist incomes and budgets tend to not be reflected in these fictional fashion worlds.

“Being an assistant stylist, you are paid dust,” says Tran, who mood-boarded Valentina’s aesthetic with producer/star Duff, who herself headlined another fantastical New York City fashion editorial, Younger. “It was very, very much about creating something that was believable.” Hence Valentina’s wardrobe is a relatable mix of high-low: expensive-looking jeans by Levi’s and Abercrombie & Fitch, and a Reiss watercolor cut-out dress for Sophie’s 30th “Dirty Thirty” birthday party.

However, the aforementioned TikTok teens do begrudgingly compliment her “limited edition YSL boots,” which, in fact, are Saint Laurent booties — and worn with a Proenza Schouler x Harmony Korine graffiti bag. “We would splurge on something with the understanding that she probably stole it from work,” says Tran. Or, rather “borrowed” from the closet, with or without the boss’s permission — which Lucan says does happen (note, however, not by her).

Wald-Cohain imagines that Harper does Rent the Runway, also because she never wears anything twice. Plus, she’d smartly flex her own — and Carly’s presumably prolific — social media clout. “Harper probably has a deal with some designers and she says, ‘I’ll wear it for you and I’ll tag you,’” says Wald-Cohain.

However, the undergrads over at Cal U blow past the boundaries of reality when it comes to their often-luxury label-infused outfits, especially Zoey. “She has a little bit of the money. She does work. She’s ambitious,” explains Cole, who began dressing Zoey when she was still a teen on black-ish. Plus, doting sneakerhead dad Dre (Anthony Anderson) must secretly send her funds. “She’s his favorite,” laughs Cole. “He’s stated that in the show.”

Behind the scenes, Cole shops high-end pieces on sale, imagining Zoey would, too. “It’s just going to Dover Street Market, Neiman Marcus, Saks Fifth Avenue, and shopping on Rodeo Drive and we’ll catch it just in time before they move it to the outlets,” says Cole, explaining that the show begins shooting at the height of discount season. “So many pieces that she’s wearing were on their third markdown.”

Lucan is also a seasoned discount seeker, who takes advantage of famed New York City sample sales, like where she picked up an Issey Miyake coat. Through her job, she keeps up on new, indie labels and has her tricks for searching online for the best deals — be it direct from the brand or through a retailer. “My tip is to always look on both sides,” says Lucan, who also will tap her contacts for an industry discount. “PR is the last resort.”

“Creating free time is hard,” says Lucan, who also notes that off-hours is prime networking time. “When I was first getting started, I was just going all in, so there was no real dating unless it was the weekend and I happened to be off.”

But Fred Z verbally abusing Valentina at work (albeit via a creepy-looking puppet to supposedly avoid litigation) rings true. “It’s accurate,” says Lucan. “There are people that grew up in a system of styling, where assistants don’t speak — they don’t have a voice — and everything they do is wrong, even if it’s breathing. So those stereotypes aren’t far-fetched.” But she does credit established stylists, like Alexander Julian and Pamela Shepard, who’ve trained her to grow her career and position herself to lead her own projects.

While plumbing the depths of “menial grunt work” and standing up for herself in a toxic professional space, Valentina perseveres because she knows the experience is a valuable stepping stone in achieving her career goals. Because, whether it’s watching fashion aspirations come to fruition through a favorite TV character — or actually making it happen, like Lucan — the assistant stylist job actually does touch us all: be it viewing runway images, clicking through red carpet galleries, flipping through a magazine, not skipping past a commercial, and stocking our own closets.