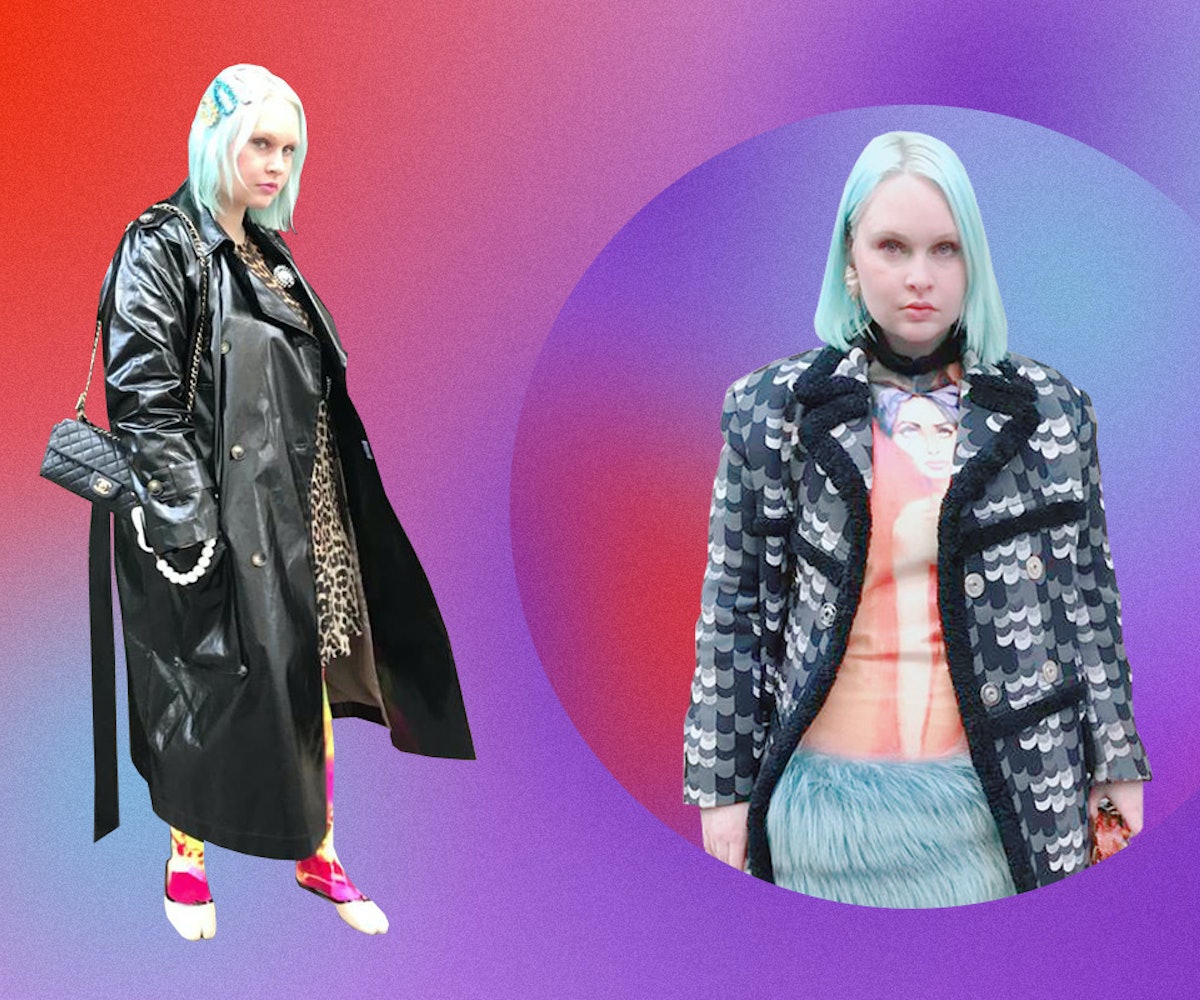 When I first met aura reader Susanna Merrick at our co-working space, The Wing, I was immediately intrigued by her work. Unlike many readers, Merrick brings fashion into the mix by analyzing orbs and suggesting color palettes, silhouettes, and outfits based on one's aura.

According to her, since she was a kid, she saw the bright glows around her family and friends. After a stint on Broadway, she studied auras and what they reveal about our well-being. Soon after, she formed her company, Aura Wear, through which she helps clients connect with their energy, understand the power of color, and make necessary adjustments to their life. While Merrick helps lots of people who feel a little lost when it comes to fashion, I have a very strong style aesthetic. Instead, I was curious about what my current aura says about me and how dressing for it could help.

During the reading, Merrick shared visions about everything from my career ambition (and how my aura affects that) to what I should wear based on my aura to conquer seasonal depression After finding out that I had a lot coming up—writing assignments, having to be in front of a lot of people, several interviews—she suggested working on "protecting" my energy for the next few weeks.

Next, she put together a color palette (see below) for me that she said was meant to "gently soothe and protect," and said I should wear it when I need "a little bit more emotional protection or like when you're feeling drained and things like that." She also suggested colors to wear when "you don't really want people to talk to you."

With this in mind, I spent a week putting Merrick's advice to use and recorded my thoughts each day. Here's what happened:

I have a very long day ahead of me, and an interview in the morning with a celebrity that's making me feel particularly nervous. At our reading, Merrick told me the main colors I should wear for my unique aura are red, light blue, and lavender. Red specifically interests me today because Merrick told me it can have the kind of effect that makes people keep their distance. She also explained that it can make one feel more grounded and centered. Merrick also mentioned to me that oversized clothing or even just more modest pieces can add an element of protection when it comes to dressing for your aura.

I opt for a pair of black jeans, an oversized plaid jacket with red, light blue, brown, and black patchwork, and a pair of camo boots. I have to admit, I do feel more protected and a bit calmer as I slide into my big jacket—it makes me feel less exposed. Armed with the information about how the different colors come into play with my aura, it's interesting to notice certain quirks, like how people do stand further away from me when I'm wearing a bigger, bolder piece, especially with a loud color like red.

I loved the way the red colors in yesterday's outfit made me feel, but, admittedly, I don't own many red pieces in my wardrobe. I do have a red-accented Balenciaga bag, however. "Red is all about being seen, but it's also like a big stop sign," she explained to me during my reading. "But also it's kind of telling people to not fuck with you."

According to Merrick, "Wearing black is also good in times that you feel like you need protection, or you're feeling a little insecure." I am interested to see how I'll feel wearing the two colors together, so I choose to pair the bag with a black-and-white coat. As it happens, I get pulled into a protest on the streets of Paris and feel much calmer than I normally would in this situation. I wore a gray-and-green dress underneath. Green, according to Merrick, is the perfect color to wear to manifest abundance and growth as someone who has a lavender aura. It might just be a coincidence, but, moments after stepping into the crowded demonstration, fake dollar bills shoot out off the stage.

Two of the most important colors Merrick said I should focus on are light blue and lavender. According to her, lavender is a natural color suggestion since it matches my aura; it complements my personality as well as my personal style. Light blue was also suggested by her for a similar reason. For today, I choose an iridescent coat that shifts from blue to light purple by Sies Marjan. I wear a green sweater, a black skirt, and a pair of vintage Miu Miu heels with light blue straps underneath it. It's the first time I'm wearing the coat and something that immediately comes to my mind is how easy it was for me to style it, which is not always the case with these colors. Surprisingly, it looks good with everything.

Today I choose a bright neon pink sweater, worn over a floral print dress with a black jacket and pink shoes. Admittedly, these aren't the main colors Merrick suggested I should wear, but I'm running low on colorful clothing as the week goes on. It's a rainy day, and the black Nanushka coat does make me feel an element of protection. However, I can't help but feel like I don't like my outfit for most of the day. With the aura reader's suggestions in my head on what I should wear, I can tell it's shaping my personal style for the week on a deeper, more personal level than usual.

I went with an outfit that was bright but still grounded in black. I had to do another interview, this time at a fashion show and party, which the introvert in me hates, so I wanted something that would give an element of protection. At the same time, I tried to incorporate shades of light blue in my vintage Prada dress and Miu Miu bag. In addition to being generally soothing, Merrick said this particular color helps to highlight my aura and also meshes well with my playful aesthetic. I'm not sure if it had anything to do with my outfit, but my day was much easier and less stressful than I had originally anticipated.

This day was almost the end of a very long week for me, and I wanted to listen to Merrick's advice again about wearing oversized pieces to protect your aura. My energy was feeling extremely low, and I felt like I needed to recharge. So I wore my oversized black trench coat again, over a leopard print mini dress to give it an even more oversized effect. It's a success—I feel like people are leaving me alone a little bit more than usual. I've never been one to wear all black, so I add a pair of tie-dye tights that barely peek out from under the massive coat. It makes me happy to see all the crazy colors even though they're mostly covered up for the outside world. This outfit for me was firmly about dressing for myself.

It's finally the end of the week, and I'm feeling inspired by Merrick's suggestions to pair my chosen colors together, only I don't have the right pieces since I'm traveling. I again decide to wear my oversized Ganni plaid jacket which mixes red and light blue. As I usually would, I pair the jacket with a pair of jeans. After a week of dressing per Merrick's suggestions, though, suddenly I have an intense craving for a purple pair of pants to wear with this jacket; maybe it would further ground me and make my intuitive senses even stronger?

It's safe to say, getting an aura reading, and dressing according to it, was one of the most interesting experiences I had ever had and completely made me rethink fashion as it relates to wellness, particularly in terms of color theory.