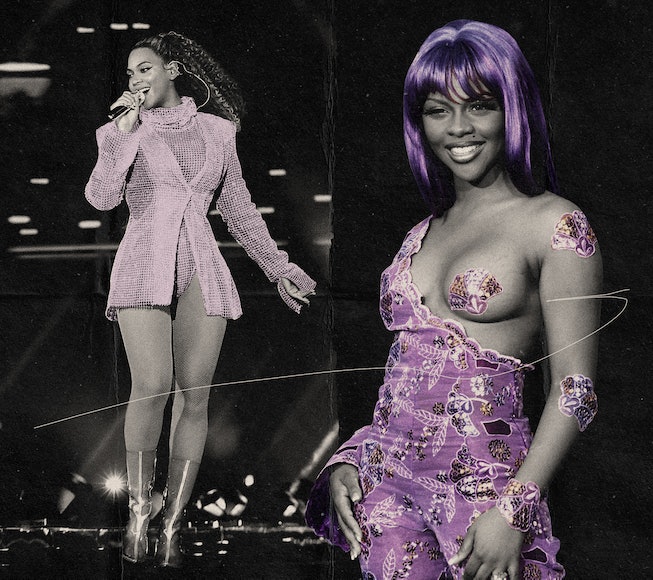 The intricacies of Black culture in every aspect is deeply woven into the fabric of the fashion industry, from vernacular and hairstyling to aesthetics and trends. Yet, fashion's biggest inspirations are constantly erased from its history: Bantu knots have become space buns, durags are now edgy and high fashion, bamboo earrings are runway-worthy jewelry, all in the name of cultural appropriation. Black culture has served as the muse behind fashion’s biggest movements and designer collections without so much as a credit or acknowledgement.

The unsung heroes and hidden figures that are the Black designers, stylists, and creatives have given more to the fashion industry than they’ll ever receive in return. Now, Black fashion historians are documenting and making Black fashion history visible, readily accessible, and easily shareable through social media, literature, galleries, and more.

Below, we spoke to three Black fashion historians about the complexities of Black culture's influence on the fashion industry and the impact Black women, men, and members of the LGBTQ+ community have undoubtedly made not only in fashion, but within pop culture, as well.

The Fayetteville, Arkansas-based scholar and teacher is the endowed chair in English literacy at the University of Arkansas and is known for his book Fashioning Lives: Black Queers and The Politics of Literacy. “I'm fighting to preserve Black fashion history by calling attention to the hidden figures of fashion history, Black history, and queer history,” says Pritchard. “What does it mean for us to use those histories about Black fashion designers as a way to really address matters of anti-Blackness and economic inequality, when it comes to opportunities for Black fashion designers, models, hair stylists, makeup artists, and people who are working in the industry now?”

On the LGBTQ+ community’s impact on the fashion industry:

“There's a kind of violence in historical erasure and it's really impossible to tell the story about fashion history without LGBTQ+ voices. The influence of trans and nonbinary models is something people often overlook. Tracey 'Africa' Norman was the first Black trans model to really be prominent in the fashion industry. She’s a trailblazer. She was in all the major magazines and had brands like Avon tapping her for campaigns. Another Black queer contributor to fashion is James Harris. He did hair for everyone from Diana Ross and Tyra Banks to luxury companies like Gucci. He was one of the first hairdressers in the United States to work with larger companies and call attention to the importance of creating products that reflected the diversity in hair.”

On how house, ball, and drag culture influenced fashion:

“Queer culture, drag culture, and performers of color have impacted the fashion industry in every way, from the language to certain kinds of adornment practices. The notion of somebody slaying and getting their face beat is a queer contribution. In the actual aesthetics, the camp is what we see in the exaggeration and ornamentation on some garments. Drag is camp, and fashion designers work as a distillation of that and made it available and accessible to a general audience. Another part of that is queer nightlife, especially the late '60s, '70s, and '80s, which had a profound influence on fashion and influenced designers like Stephen Burrows. They were channeling the energy of Paradise Garage and Studio 54 into the clothes that were shown on the runway.”

“As a kid growing up watching old episodes of Dynasty, I thought she was so glamorous. I'm seeing that as a Black queer person and the impact she had on me and so many other Black queer people, including Patrick Kelly, Willi Smith, and the way we talk about style.”

Brooklyn-based Tianna Janae Graham’s early memories of collecting magazines and creating collages prepared her for a career in fashion history and archiving. After studying fashion merchandising, she took on an archive assistant position and started an Instagram account, Archive Alive, that features rare, historical fashion imagery. “I’m channeling everything that I want to do professionally while providing history to people in a digestible way,” says Graham. “I'm telling these stories and providing all the information that I can find about everyone who worked on a project or photograph. Just documenting things in real time is key and important.”

On Black women and hip-hop’s impact on the fashion industry:

“Black women are the blueprint for the fashion industry and we often don't get credited. The industry often looks to us to see what's new or hip, and then they'll take it and water it down, assimilate it, and make it more digestible for popular consumption.

“I often connect Black people's impact on fashion with hip-hop. It’s been so influential, all the way back to Dapper Dan and how hip-hop style started from the street with drug dealers, and then rappers emulated their styles and made them more mainstream. From there, trends would start. Female rappers and hip-hop artists are continuously pushing the culture through their fashion choices. Cardi B and Beyoncé are able to wear archival pieces that most people wouldn’t see unless it was in a museum exhibition. Lil’ Kim received recognition from Alexander McQueen and he said she was his idol, and that was major for a Black woman in hip-hop. That kind of recognition from a designer of his caliber was unheard of at that time.”

“Kim was styled by Misa Hylton and she had the right eye for that monochromatic look — the hair matching the outfit, the shoes, the nails, and the makeup. It was all monumental for a Black woman in hip-hop.”

Darnell Jamal Lisby, who’s based in New York, merges his passion for teaching fashion history and bringing people together through his work with such exhibitions as Pockets to Purses at the Museum at FIT and 2020’s Willi Smith: Street Culture at the Cooper Hewitt, Smithsonian Design Museum. “I preserve fashion history in a more strategic and subtle way,” he says. “I try to present it in a way that's not dissimilar from the way people have been able to understand the history of fashion, by creating and weaving stories together. I've made it a mission to lend my voice to exhibitions that tell the stories of Black people, Black creators, and fashion figures within the history of fashion.”

On Black men’s impact on the fashion industry:

“When working on the Pockets to Purses exhibit, we wanted to tell the story of the man bag, which was inspired by a scene in the movie Beauty Shop. The lead male barber gets ragged on for carrying a man bag. I knew we had to tell that story because it shows that men can wear bags and purses, as well. These gendered ideas needed to be rethought in the current climate, even though there have been generations that have leaned towards gender neutrality.

“In the '60s to '80s, Rick James, Prince, James Brown, Little Richard, and Grace Jones have played on gender neutrality through fashion. The Black community has always kind of struggled with gender roles because of what slavery had done. It emasculated the Black man and I wanted to put that story out about the man purse and, specifically, on a Black body to break up the idea that the purse is only for women's wear.”

Favorite Black fashion moment in pop culture: Beyoncé in custom LaQuan Smith for the On The Run II Tour

“Beyoncé frequently uses fashion and costumes as a way to champion different social messages or cultural messages. When she came out wearing LaQuan Smith for the first time, it was so significant because she had never really opened a show or tour wearing a Black designer.”