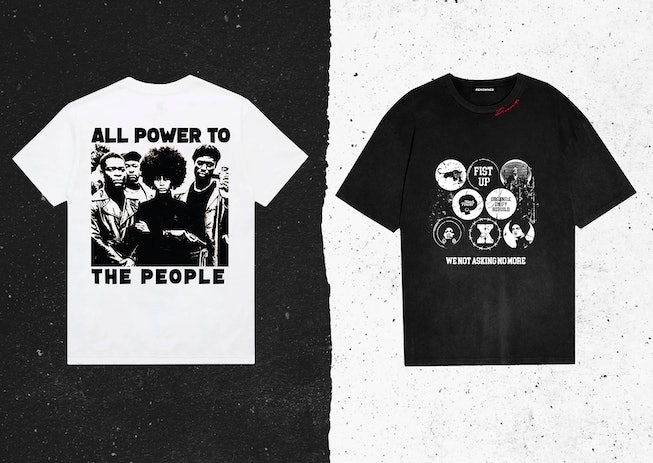 "It's in the fabric and the genetics of streetwear to protest," says Gavin Mathieu, founder and creative director of Supervsn Studios. The Los Angeles-based brand recently released two T-shirts inspired by the killing of George Floyd and worldwide protests against police brutality — one of dozens of Black-owned streetwear labels fighting against racism by spreading socially conscious messaging and reinvesting in Black communities.

Streetwear has long been rooted in Black liberation. The stylish subculture emerged in the late-1970s alongside the rise of hip-hop and skate culture as people began restyling ready-to-wear fashion and adopting affordable, comfortable athletic wear. In the 1980s and '90s, young people started their own brands to make clothes that represented themselves and their communities, while providing an alternative to dominant corporate brands.

"There's always been a political edge to streetwear," says Sonya Abrego, a fashion historian who specializes in 20th-century ready-to-wear clothing. While not all streetwear designers are explicit or intentional in their messaging, the style's ties with Black freedom date back to '90s hip-hop.

"Back in the day, you had the 'Fight the Power' T-shirts and the Africa logo," explains John Dean, founder and creative director of Renowned LA. "It was all about who you were and what you represented."

"There's always been a political edge to streetwear."

T-shirts are one of the purest forms of self-expression. Abrego says that T-shirts are easy to print on because they serve as "great blank canvases" to help bring awareness. From peace advocates during the Vietnam War to punk kids in the '80s and activists during the AIDS epidemic, people have used tees as direct forms of communication for decades.

"T-shirts are real estate on a person's body," says Leon St. Heron, owner and creative director of Heron Hues. "I try to put as much Black culture and social awareness as possible and use people as walking billboards."

One's wardrobe can also tell you a lot about their character, according to Mathieu. In addition to being functional, T-shirts are also deeply personal. "It's the closest thing to getting a tattoo," he says. "If you're willing to put it on your body and make a statement, you must believe in it."

However, there are limitations to sartorial messaging, as packing the 400-year African-American experience onto a T-shirt is impossible.

"The most effective form of spreading messages is education," says Tremaine Emory, owner of Denim Tears. "My brand is a bridge to education." He adds that while images on T-shirts cannot give people the full picture, he hopes his graphics lead people to other sources of knowledge, like books or conversations with friends.

"If you're willing to put it on your body and make a statement, you must believe in it."

While there has been a recent surge in popularity of socially-conscious clothing, this isn't the first time many of these brands have released protest tees. Corey Populus, founder and creative director of Circulate, released his Black Panther-inspired "Power T-Shirt" in July 2019 but decided to restock it in response to recent police murders of Black Americans.

Meanwhile, Heron restocked the "Reaper T-Shirt" on May 26, one day after Floyd's death. He first debuted the design, featuring the Grim Reaper perched on the hood of a police car, in October 2019 but only sold one tee at the time.

"I don't know if people were just scared to buy it," says Heron. "It's funny to see people want it now and to sell a couple dozen of them so fast, when before, I barely sold any."

Heron is happy that people are taking an interest in the T-shirt and showing support, but he's skeptical of big companies capitalizing on the movement. Likewise, Mathieu's "Do Better Tee" borrows Nike's font and flips its slogan with "UN-JUST" on the front and "DO BETTER" on the back.

Mathieu says the design is a "shot" at big companies who take from Black culture and Black athletes but don't give enough back. This sentiment has sparked an outpour of support for Black-owned businesses in what Mathieu calls "leveling the economic playing field."

"A lot of these bigger companies' narrative comes from Black people and Black culture," says Populus. "It's important to support the people that are actually living what a lot of non-Black companies are selling."

Many of these designers are doing just that: donating proceeds to various community-empowerment organizations. Populus donated about $4,000 in proceeds to the Minnesota Freedom Fund. Dean raised $15,000 and counting for Black Lives Matter, the George Floyd Memorial Fund, and Reclaim the Block. Emory has contributed more than $45,000 in proceeds to the Know Your Rights Camp.

For many Black creatives, the goal goes beyond designing protest tees and raising money. Through the power of streetwear, they hope to inspire people to vote in federal, state, and local elections, hold politicians and corporations accountable, and push for racial and economic equality.

"We have to have solidarity," says Emory. "We have greater power than we know."

Below, we rounded up nine Black-owned streetwear brands that are selling T-shirts for racial equality and awareness.

The "Heroes of Blackness Benefit Tee" is a vintage-style T-shirt with eight "buttons" representing Black freedom. The black-and-white design includes images, like the Black Panther Party symbol, as well as revolutionary Civil Rights-era icons Kathleen Cleaver and Huey P. Newton. The word "Dismantle" is stitched in red on the neck, and each tee comes with a hangtag including information on where to donate and a list of people who have been killed by police. Renowned LA will donate proceeds to Black Lives Matter, the George Floyd Memorial Fund, and Reclaim the Block.

The "Cotton Peace Charity Tee" features a photo from the L.A. riots of a man standing in front of a fire wearing a peace symbol made of cotton wreaths. "The fire behind him is the despair, and the peace symbol on his shirt is hope," says Emory. On the back is a James Baldwin quote about looting from 1968. All proceeds will be donated to the Know Your Rights Camp, Colin Kaepernick’s foundation that educates and empowers Black and brown communities.

The back of Circulate's "Power T-Shirt" features a Civil Rights-era photo of Angela Davis and three other members of the Black Panther Party. Bordering the image is "ALL POWER TO THE PEOPLE," a phrase that inspired Populus to give back to the those on the protest frontlines by donating proceeds to the Minnesota Freedom Fund.

The "Soul of a Nation Tee" presents the crucifixion of Jesus Christ over a list of names of those killed by police since Eric Garner's death in 2014. "Jesus Christ was lynched," says Mathieu. "But that story was never told in that way." The words at the bottom, "NO ONE EVER REALLY DIES," signify the eternal energy of Black martyrs. The shirt features iconography from Ice Cube's Lench Mob Records and a Jesse Jackson quote written in lime green.

Soul Of A Nation Tee
SUPERVSN

The “Reaper T-Shirt” by Heron Hues places the Grim Reaper on the hood of a police car. “The cops might not even know that the reaper is there,” said Heron. “Death is just on its way when you call the police. It doesn’t mean the Reaper’s gonna get you, but be cautious.” The back of the shirt reads, “WHO DO YOU CALL?” with 911 crossed out below.

TIER's "PTPD Tee" features a badge with "BLACK LIVES MATTER" and a raised fist above "POLICE THE POLICE DEPT." On the back are more raised fists and blank protest signs for the buyer to design (each tee comes with a marker). TIER will donate all proceeds to organizations that stand against racial injustice and creative spaces for the Black community.

The "Arrest The Police 1.0" T-shirt features a skeleton wearing a peaked cap bordered by the phrase, "ARREST THE POLICE." 10.DEEP has suspended its for-profit business and is currently devoting all company resources to raising bail money for protestors. At $15, the shirt is priced accessibly in order to reach more people and "spark and sustain discussion." The brand has raised over $20,000 for organizations in the National Bail Fund Network.

The "UNITE 2020" tee from H33M is based on a Carlos Latuff political cartoon that shows a raised fist popping out of America, clenching a police car. The graphic, which says "UNITE AGAINST POLICE BRUTALITY," is from 2016, when over 250 Black people were killed by police. All proceeds will be donated to the Minnesota Freedom Fund.

Brooklyn-based Crime Club's "Stomp Out Racism Tee" plays on the famous Uncle Sam "I Want You For U.S. Army" recruitment poster. The fictional patriotic figure is replaced with the Crime Club mascot wearing a protective mask. The shirt comes in black, white, and yellow.

Stomp Out Racism
Crime Club
NEXT UP
Fashion
Paloma Elsesser Launches First-Ever Plus-Size Collection With Miaou
Fashion
How To Wear 2022’s Biggest Denim Trends, According To A Stylist
Fashion
Rihanna Is Opening Savage X Fenty Stores In 2022 — UPDATE
Fashion
Behind The Scenes With Laura Harrier For The 2022 Met Gala