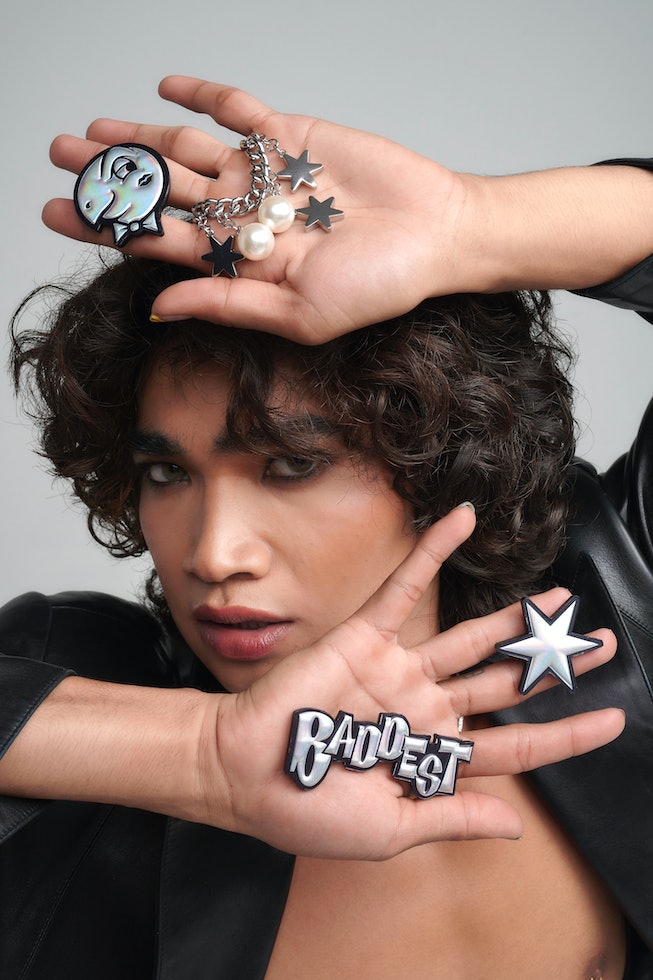 Bretman Rock has been an ambassador for Crocs since the end of 2020, but his obsession with the brand started off as a joke.

“To be honest, I was really lit one day. I was high as hell, and I was scrolling through Instagram and I kept seeing Crocs ads, and then I clicked on it and jokingly bought two pairs,” Rock tells NYLON. The polarizing style — loved and hated by many — is fueled by irony, and so the social media star shared his new purchases with a sarcastic unboxing video post.

“I pretended I bought something expensive and I put them inside like a Hermès bag or a Prada bag, and then I did an unboxing,” says Rock. “The rest was history. Ever since then people found it funny that I was pulling out Crocs out of a designer-name box. I just kept doing it, and I guess over time, people kept tagging Crocs or kept sending Crocs my Instagram Stories. That's how I got the brand to notice me. I actually wasn't even trying, it just happened so organically. I didn't even know I was obsessed with Crocs until I looked down and I was like, ‘Oh my God, I bought 10 pairs in a week. What the f*ck?’”

Now, almost one year into their partnership, Rock is releasing his first-ever official collaboration with Crocs: a limited-edition five-piece pack of Jibbitz. “I didn't have any inspiration besides me, Bretman Rock. I just wanted something that was very extra, but also that matched every Jibbitz, because I know everybody has so many different kinds,” he explains. “So I wanted Jibbitz that could go on any Croc color.”

The collection features five designs in a shiny holographic hue, including Rock’s signature “Da Baddest” tagline, stars, a turtle — “Because you know what, we need to motherf*cking save the turtles.” — and dangling charms that go on the back of a “Sports Mode” Croc. “I just wanted to make Jibbitz that was like me as a person,” says Rock. Fans will have the chance to purchase the Bretman Rock x Crocs Jibbitz collaboration through special online drawing on the Crocs website from now until October 1 at 2 p.m. ET.

Ahead, Rock talks about his earliest memories (and growing collection) of Crocs, attending New York Fashion Week, what he hopes to release next with the brand, and more.

What’s your earliest memory of Crocs?

My earliest memory of Crocs would have to be in high school. I was on the track team, and a lot of the track kids had Crocs — the white ones to be specific — and it was because our coaches told us that we needed shoes, that we couldn't be in our spikes and our running shoes all day. So all of us literally bought white Crocs. I feel like when I was growing up, Crocs had a negative connotation, I guess you could say. People thought Crocs weren't cute, and then high school happened, and I was like, ‘Wait, why was I not wearing these since like I was in elementary school? I would've been so cute in them.’

And you’ve been collecting Crocs ever since?

What really started my Crocs collection was probably because of [lockdown]. I noticed that I didn't have any house slippers, and so I just literally went HAM and I bought so many in one day.

How many pairs do you have now?

I honestly stopped counting after 54. I have 54 that I bought myself, and then I partnered with Crocs and it just doesn't stop now. I don't even have to buy Crocs anymore.

Do you have any specific styles or colors that you really like?

I am obviously for their clogs, because that's their classic, but I recently started only wearing platform Crocs, because I'm a little bit on the tinier side and the Crocs platform helps me with a little bit of a height. I just feel like they look cuter and they have some extra cushion in it, as well.

So you started buying more Crocs to wear them around the house but do you wear them out at all?

I wear them everywhere. I wear them even in my fancy clothes. There's so many videos of me on TikTok showing my outfits, and my shoes are just Crocs. But I can't even think of where I wouldn't wear Crocs. I think the better question is, where wouldn't I wear Crocs? I wear that sh*t everywhere.

You did a special drop for this Jibbitz collab at New York Fashion Week and also ended up attending a few shows. How was it for you this season?

I've been [to NYFW] once before, but the first time that I'd gone, I was a little baby and I was not really invited to that many shows. I wasn't really that b*tch of fashion week yet. I was also still trying to find my footing in the fashion industry, because at the time I was also super into beauty.

Now that I'm 23, I'm a little bit older now, I wanted to really go off this year and it was so amazing working with my stylist, Brian Miller, and with so many brands that wanted to dress me. I think what I can take away the most in this fashion week is that there's so many people who are rooting for me and want the best for me. Those people oftentimes look like me, they are Asian, and I was dressed by so many Asians this year from Monse, whose co-creative director, [Laura Kim], is an Asian woman, to Prabal Gurung and Peter Do. And even being dressed by other gay creatives also meant so much to me.

I just love being surrounded by people who put their people on, and that is something that I want to do with my career. Fashion week is a big old adult dress-up party. I don't understand why people take it so seriously. We are all adults dressing up all day, attending these fashion shows. That's fashion week in a nutshell for you.

Can you share what’s coming up next for you with Crocs?

This is the beginning of more than a collaboration with Crocs. I hope to just not have Jibbitz as my collection with Crocs, and, hopefully, expand into a shoe or a clog that I want to design. So fingers crossed; I don't know anything yet. Maybe I'm just manifesting a clog collection, but I like to think that this is only the beginning with Crocs.

I would definitely get a platform Croc if you made one.

Yes! I'd call it Bretman Croc.