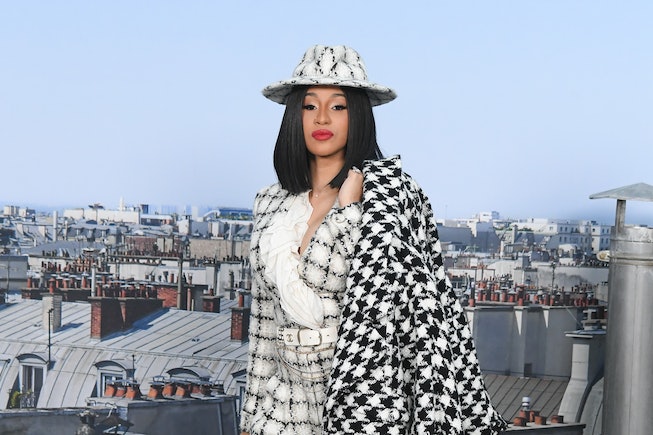 We've known for some time now that Cardi B is a fan of the Balenciaga boots. You know, the ones that look like socks? Turns out she’s actually a fan of all things Balenciaga, and the love between her and the French fashion house is mutual. Cardi B is the face of Balenciaga's new campaign for its Neo Classic Bag, which has come with a giant billboard on the side of the Louvre in Paris.

Cardi posted the campaign image to her Instagram on Tuesday writing, "Ya lookin at the face of a @Balenciaga campaign! I remember how I felt seeing myself on a billboard in NYC Times Square but PARIS! Wish I was there to see it in person!." According to the brand, Balenciaga's creative director Demna Gvasalia chose the look for Cardi, who then shot the photo herself in Los Angeles.

"By removing some steps in a typical campaign production, a contemporary way of creating fashion imagery is brought to life, bridging the gap between fantasy and experience," Balenciaga said in a statement provided to WWD. "From the comfort and confinement of a familiar place, with near-limitless creative control, the stars of the Winter '20 campaign share an emotional side of dressing alone — for one’s self, or for today’s multiple modes of staying in touch from afar."

Check out Cardi's new ad below. Or, if you're in Paris, take a stroll down to the Louvre.